Back to Godhead > Devotees > Chanting > An Expanding Ocean Of Bliss

An Expanding Ocean Of Bliss

In a poetic stanza of seven metaphors, God Himself tells us the benefits we can enjoy by chanting the Hare Krsna mantra. 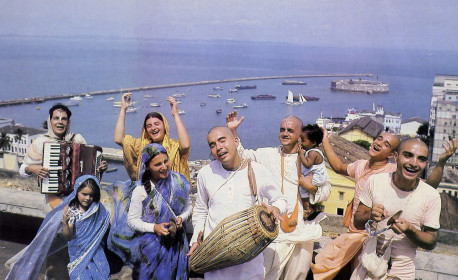 On the shore of the Atlantic Ocean in Salvador, Brazil, devotees of Krsna practice the sublime process of self-realization called hari-nama-satikirtana.

“Hare Krsna!” You’ve probably heard these two words at least once in the last few years, either by themselves or as part of the longer Hare Krsna mantra. But chances are you had only a vague idea of what they meant or why the Hare Krsna devotees chant them over and over again for hours at a time. No, the devotees aren’t practicing autohypnosis at the behest of some demoniacal cult leader; they’re practicing the chanting of the holy names of God, a method of self-realization taught five hundred years ago in India by an incarnation of God named Sri Caitanya Mahaprabhu.

Lord Caitanya chose to teach this process of self-realization primarily through oral instruction and personal example. Yet He did write eight seminal Sanskrit verses describing the glories of chanting the holy names of God, especially in congregation. In a series of seven metaphors, the first of these verses sets forth the inestimable benefits we can attain through this sublime process: “All glories to the chanting of the holy names of Lord Krsna, which cleanses the mirror of the mind and extinguishes the blazing fire of material existence. That chanting is the waxing moon that causes the white lotus of universal good fortune to blossom. It is the life and soul of all transcendental knowledge, and it expands the ocean of spiritual bliss. It enables one to taste full nectar at every step and gives a cooling effect to everyone” (Siksastaka 1).

The first metaphor is ceto-darpana-marjanam: “The chanting of the holy name of God polishes the mirror of the mind.” Krsna consciousness is technically known as bhakti-yoga, and as in any yoga system, the mind is the crucial element. If our mind is absorbed in thoughts of family, money, personal pleasures or safety, mundane philosophy, science, or literature, or our own salvation—in short, in any subject other than God and service to God—then our mind will bind us to the world of matter, with all its limitations and suffering. Such thoughts constitute dirt on the mirror of the mind, because they prevent us from seeing our true identity as fully God conscious servants of the Supreme Lord.

The chanting of God’s holy names quickly polishes the mirror of the mind and reveals both Him and ourselves. “The face is the index of the mind,” Srila Prabhupada was fond of pointing out. And then he would often call attention to the uniquely bright faces of his Krsna conscious disciples. God is by nature full of happiness, and when we become God conscious by chanting His names, we also become full of joy and free from anxiety. 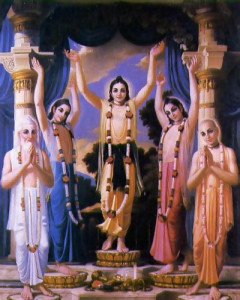 The second of Lord Caitanya’s metaphors is bhava-mahadavagni-nirvapanam: “The chanting of God’s holy names extinguishes the blazing fire of material existence.” The Sanskrit word bhava means “becoming,” and it often indicates the series of severe miseries that unavoidably accompany material life: birth, old age, disease, and death. If we’re caught in a raging forest fire, our position is hopeless. Similarly, without transcendental knowledge our position in the blazing forest fire of birth, old age, disease, and death is also hopeless.

And what’s more, death provides no release from these four miseries. The primary teaching of all Vedic literatures, beginning with the Bhagavad-gita, is that we are not our ever-changing bodies but eternal, immutable spiritual souls within the body. At the time of death, the soul whose mind is full of material thoughts enters a new body to undergo another term of birth, old age, disease, and death. This painful process, extended over countless lifetimes in millions of species (both human and nonhuman), makes being caught in a forest fire seem pleasant.

But there is a way to end this suffering once and for all: by chanting God’s holy names. And the Brhan-naradiya Purana, an authoritative Vedic scripture, says this is the only way: “In this Age of Kali [the present Age of Quarrel and Confusion], the only way to attain liberation from the cycle of birth and death is to chant the holy name of God. There is no other way; there is no other way; there is no other way.” Our minds are too disturbed and our bodies too frail for us to practice any process of self-realization other than the easy, blissful congregational chanting of Hare Krsna. By absorbing the mind in the names of God, we become attracted to Him and lose our affinity for mundane things—an affinity, as mentioned before, that keeps us trapped in the cycle of birth and death. Krsna literally lifts us out of the conflagration of the material world and takes us back to the kingdom of God.

That is why Lord Caitanya says, sreyah-kairava-candrika-vitaranam: “The chanting of Hare Krsna is the waxing moon that causes the white lotus of universal good fortune to blossom.” Just by hearing the devotees chant Krsna’s holy names, we begin our spiritual life. The names of God enter into the heart of even the most diffident listener and strike a chord of remembrance. However fleeting, this remembrance of God through the sound of His holy names will never be totally lost and will eventually develop into full God consciousness.

Of course, now we may not think of this as such good fortune. Maybe we think good fortune, “good luck,” means that we have plenty of money and the capacity to enjoy it. Perhaps for us good luck means winning the state lottery, finding a roomy, affordable apartment in a safe neighborhood, or meeting an attractive mate. Yet all these things are simply ephemeral flashes of light in the overwhelmingly dark and tragic world of material life. They all end, at the latest, at the time of death. They yield no permanent benefit but simply lull us into believing there is some hope for happiness outside the service of the Lord. Genuine good fortune, on the other hand, is to see and hear the devotees of Krsna chanting His names and have our mind turned toward God.

Next Lord Caitanya says, vidya-vadhu-jivanam: “The chanting of God’s holy names is the life and soul of all transcendental knowledge.” In the Bhagavad-gita (13.3) Lord Krsna says that real knowledge means to know matter, the individual spiritual soul, and the Supreme Soul, God. One who fully understands the nature of these three subjects and the relationships among them possesses transcendental knowledge.

This knowledge is not something that has to be brought from outside; it already exists within us, deep within our subconsciousness. Like amnesiacs, we have simply forgotten who we are. who our father is, and how we should use everything we have in His service. The chanting of the Lord’s holy names acts as a powerful reminder. As mentioned before, the holy name “cleanses the mirror of the mind” and reveals the truth about God. the soul, and matter. So when the devotees shout “Haribol!” they are calling upon all of us to chant God’s names and awaken our innate transcendental knowledge.

Anandambudhi-vardhanam, says Lord Caitanya next: “The chanting of Hare Krsna expands the ocean of transcendental bliss.” We are all searching for pleasure; that is our nature. But where to find unlimited, unending, ever-increasing pleasure—that we do not know. The chanting of Hare Krsna reveals that source of unlimited pleasure to us because it reveals Krsna Himself. This is the great mystery of the holy names of God: they are identical with Him in every respect. In other words, by chanting and hearing Hare Krsna, Hare Krsna, Krsna Krsna, Hare Hare/ Hare Rama, Hare Rama, Rama Rama, Hare Hare, one associates directly with the Supreme Personality of Godhead, the source of infinite pleasure. The pleasures of sex, drugs, mundane music, and so on are like drops of water compared to the ocean of bliss we can enjoy by chanting the names of God.

The chief characteristic of spiritual pleasure is that, unlike material pleasure, it is constant. So Lord Caitanya now says pratipadam purnamrtasvadanam: “Chanting Hare Krsna enables one to taste full nectar at every step.” Anyone who witnesses devotees chanting on the street will be struck by their sustained exuberance over two, three, or more hours. What keeps their spirits so high? The distinctive quality of the holy name as a reservoir of ever-fresh transcendental pleasure. “Sensual pleasures have a beginning and an end, so wise men do not seek them,” says Lord Krsna in the Bhagavad-gita (5.16). He also declares that “the self-realized person enjoys unlimited happiness, for He concentrates on the Supreme” (Bg. 5.15). The devotees fully absorbed in chanting and hearing Hare Krsna, Hare Krsna, Krsna Krsna, Hare Hare/ Hare Rama, Hare Rama, Rama Rama, Hare Hare are tapping the source of unending pleasure that lies beyond the limitations of body and mind. On this platform one can enjoy constantly, in any condition of life.

Finally, Lord Caitanya describes the chanting of the holy name as sarvatma-snapanam: “It gives a cooling effect to everyone.” The Vedic literature often describes life without spiritual awareness as beset by tapa-trayi, “threefold burning miseries.” These are the miseries caused by one’s own body and mind, such as cancer or insanity; the miseries caused by others, such as war or pestilence; and the miseries caused by natural disasters, such as earthquakes or floods. Everyone in the material world is constantly being burned to some extent by one or more of these miseries, and most of our energy is spent trying to counteract them.

But we can never find real relief from the scorching heat of material misery until we chant the holy names of God. Since all misery affects only the body and mind. if we can transcend these and enter into the spiritual realm of existence, we can also transcend misery. This is precisely the effect of chanting the Hare Krsna mantra. Like material pleasures, material pains become insignificant for one who bathes his consciousness in the cooling river of sound called hari-nama-sankirtana, the congregational chanting of Hare Krsna, Hare Krsna, Krsna Krsna. Hare Hare/ Hare Rama, Hare Rama, Rama Rama, Hare Hare.

So the next time you hear the words Hare Krsna, you’ll know a little more about the tradition behind them and the wonderful benefits they can give you—and maybe you’ll even feel inspired to join in the chanting yourself.