Back to Godhead > ISKCON > News > A New FATE in Detroit

A New FATE in Detroit

In a mansion built with a Detroit millionaire’s auto fortune, FATE now portrays the pastimes of Lord Sri Krsna with a new multimedia museum.

Detroit—Last September a new dining facility, a new multimedia museum, and a complete renovation of the grounds delighted visitors to the Bhaktivedanta Cultural Center, this city’s branch of the International Society for Krishna Consciousness (ISKCON).

The ribbon-cutting ceremony for the new museum was a semiprivate event, but even without publicity about four hundred people toured the museum and grounds during this preview opening. The grand opening is scheduled for next spring.

Attending the ceremony were two of ISKCON’s present spiritual masters, Srila Bhavananda Goswami and Srila Ramesvara Swami, who have been overseeing the completion of the project.

The Bhaktivedanta Cultural Center is dedicated to His Divine Grace A.C. Bhaktivedanta Swami Prabhupada, ISKCON’s founder and spiritual guide, who passed away in 1977. Srila Prabhupada, whose sculpted figure appears writing at his desk in his room at the Center, translated and wrote more than seventy books dealing with the Vaisnava (devotional) philosophy and spiritual culture of India. The Bhaktivedanta Cultural Center is dedicated to continuing his work by bringing the ideas and methods of bhakti-yoga into the lives of the Center’s many visitors.

Guests to the Center’s preview opening enjoyed the formal gardens, with their marigolds, salvia, and roses; the water fountains, with colored lights glittering into the evening; and, at the head of the outdoor waterfall, the brilliant golden figure of Lord Matsya, the first of ten original outdoor sculptures representing Lord Krsna’s major incarnations (the other nine will be installed next spring).

Visitors to the Center begin with a tour of the First American Transcendental Experience (FATE), an elaborate multimedia diorama museum. The tour, which lasts forty minutes, includes six beautifully detailed dioramas illustrating pastimes of Krsna taken from the Srimad-Bhagavatam, a major scripture of India and one of the works translated by Srila Prabhupada. The museum is a magical experience: trees blossom, monkeys peer slyly through the bushes, and an indoor waterfall splashes as Krsna and His friends and calves appear, poised within arm’s reach of the seated guests.

Adi-deva dasa (Haydn Larson), Project Director of FATE, led his team of talented artists, sculptors, and musicians through five years of work to complete the dioramas, the special effects, and the soundtrack of narration and music.

After the diorama museum, guests go on a guided tour of the building itself (the famous Moorish mansion built in the late 1920’s by Lawrence P. Fisher, of Body-by-Fisher fame). The opulent mansion of marble, onyx, ceramic tile, intricately carved wood, and gold leaf was in disrepair until ISKCON purchased it with combined donations from two devotees, Ambarisa dasa (Alfred Brush Ford, great-grandson of the man who built the Model T) and Lekha-sravanti-devi dasi (Elizabeth Reuther Dickmeyer, daughter of Walter Reuther, the labor leader). Devotees went to work to restore and enhance the mansion’s original beauty, and now guests share in the appreciation of its splendor.

On the second floor, guests first enter the new gallery of original Krsna conscious paintings and sculpture, and then visit the music room, where talented Indian and American artists regularly perform. The art, music, dance, and drama of India’s spiritual culture promise to be one of the Center’s major attractions. 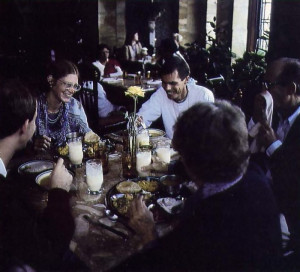 Amidst the marble and carved wood columns in the Cultural Center’s dining room, the director of the FATE project, Adi-deva dasa (center), enjoys dinner with his wife and co-worker, Siladitya and his parents and brother

Across the hall from the music room, there’s seating for forty people in the elegant new dining facility. And not only is the food delicious, it’s spiritual, having been cooked with loving devotion and offered to Their Lordships Sri Sri Radha-Kunjavihari, the presiding Deities of the Bhaktivedanta Cultural Center. Guests and members are welcome to see the Deities and attend the traditional arati ceremonies, chanting, and classes in bhakti-yoga, all held daily in the beautiful marble temple on the first floor.

According to Prabhanu dasa (Paul Alien), the Center’s manager, the indoor programs will continue for the public all winter long, while work continues on the gift shop, the grounds, and the outdoor sculptures for the grand opening next spring. The museum is open from 6 p.m. to 9 p.m. on Friday and from noon to 9 p.m. on Saturday and Sunday. Groups of ten or more may arrange tours Monday through Thursday. For more information about the schedule of tours and the new dining facility’s catering service, call (313) 331-6740.

“Servant of the Servant” Published

Houston—The Bhaktivedanta Book Trust has published the first volume of a memoir entitled Servant of the Servant, by Srila Tamal Krishna Goswami, one of the first American disciples of His Divine Grace A.C. Bhaktivedanta Swami Prabhupada. The book tells of the early days in San Francisco and Los Angeles when the Hare Krsna movement was just beginning.

Srila Tamal Krishna Goswami was (and still is) one of Srila Prabhupada’s most trusted leaders in the Hare Krsna movement, and the book revolves around letters he received from Srila Prabhupada during 1968 and 1969.

As Tamal Krishna Goswami gives the text of each letter, he tells of the events that led up to it and followed it, and he explains what the letters meant to his own spiritual life and the lives of other devotees. 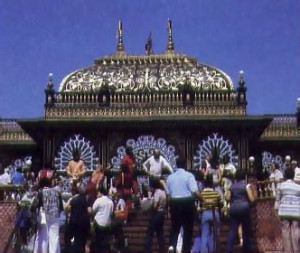 New Delhi—”It is a rare pleasure to peruse this luxurious edition of our great devotional classic, Srimad-Bhagavatam. I wish all success to the movement for the spread of Krishna Consciousness, and in particular to this magnificent project for bringing the treasures of the Bhagavatam to the Western reader.” (K. Swaminathan, Chief Editor of The Collected Works of Mahatma Gandhi.) 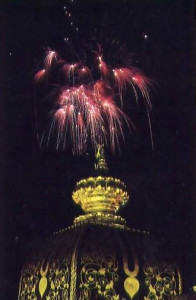 New Vrindaban, West Virginia—Thousands of tourists and Hare Krsna devotees poured into this Hare Krsna community for a celebration on Labor Day weekend.

The celebration took place to honor His Divine Grace A.C. Bhaktivedanta Swami Prabhupada, the founder and original spiritual master of the International Society for Krishna Consciousness, for whom the New Vrindaban devotees labored seven years to build Prabhupada’s Palace of Gold, an ornate memorial now the fifth largest tourist attraction in West Virginia.

On the final day of the three-day festival, the devotees celebrated the birthday anniversary of Srila Kirtanananda Swami Bhaktipada, the spiritual leader of the New Vrindaban Community and the one who led the devotees in building the Palace. 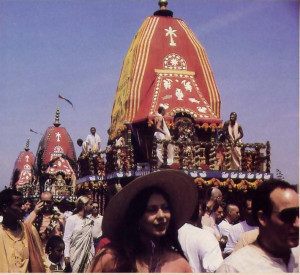 His name is Jagannatha—Lord of the Universe—and this summer and fall millions of people throughout the world pulled the ropes of His chariot, sang His praises, and feasted on His merciful bounty of prasadam (spiritual food), as Hare Krsna devotees brought the annual Ratha-yatra Chariot Festival to major cities around the world.

Washington, D.C., Los Angeles, New York . . . thousands lined the streets as the red, yellow, blue, green, golden-topped, flowered, beribboned carts sailed by on huge wheels bearing mirrors that flashed in the sun. London, Birmingham, Bristol, Brighton, Manchester, Glasgow, Rome . . . all over the world thousands came to praise or scoff, but stayed to eat, as literally millions of plates of free vegetarian food, made spiritual by having been offered to the Lord, were served by blissful devotees. 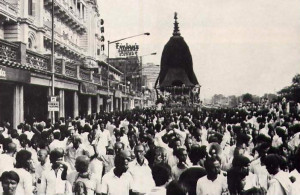 Bombay, Delhi, Calcutta, Madras . . . devotees on the carts threw flowers, garlands, balloons, packets of prasadam into the outstretched hands of the shouting crowds. And at the end of the parade, the fairgrounds: the brilliantly colored tents, the book displays, the dramatic and musical performances, the exhibits of paintings and sculpture—all living, vibrant proof that God isn’t dead, spiritual life isn’t dry, meditation doesn’t have to put you to sleep—look! Up there on the cart! That’s the Lord of the universe, Jagannatha. Why is He smiling? 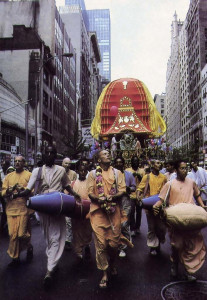 Boston, Mexico City, Honolulu . . . in the Aloha Day parade, His cart won a prize. The theme of the parade was “Isles of Smiles,” and the Lord of the universe smiled down from the fifteen-foot-high altar, smiled out from the wheels, decorated with His form made of thousands of colored chrysanthemums, and, as the sign on the cart said, smiled “over the Isles.”

The Lord is pleased by the sincere loving service of His devotees. And what amazing quantities of service had to be done to put these festivals on! An incredible fifteen tons of prasadam was served to hundreds of thousands in Calcutta! Twenty thousand took prasadam in Los Angeles. In London, devotees gave out one and a half tons of feast preparations. Tons and tons of vegetables bought, washed, cut, cooked, offered to the Lord, served out . . . hours and hours of planning and carpentry work to build the carts . . . more hours spent stringing miles and miles of marigolds, carnations, roses to decorate them . . . hundreds of canopies, flags, and tents painstakingly sewn . . . hours of practice to perfect the stage performances . . . and have you ever tried to paint an elephant?

Vancouver, New Orleans, Toronto . . . there are the big moments, like when the mayor of the capital of the United States officially proclaims the day of the festival Ratha-yatra Day . . . like when the Chief Justice of Bengal, Sri Shambu Chandra Ghose, begins the Calcutta festival by sweeping the road in front of the chariot with a golden broom, just as a famous king did five hundred years ago . . . like when the year’s major soccer match is cancelled because 2 ½ million Calcutta residents would rather see the chariot roll by. 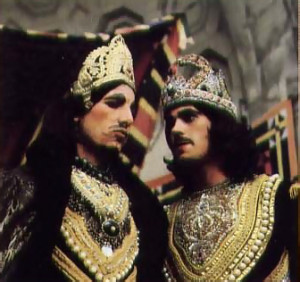 But the small moments are just as important . . . like when festival-goers in D.C., driven under the tents by a twenty-minute rain shower, watched ecstatic, irrepressible devotees dancing and chanting out in the rain . . . like the look on one small boy’s face when he finally realized that what he eats when he goes out for a hamburger is a relative of that soft-eyed, gentle ox he’s been stroking so lovingly . . . like the satisfied smile on a grandmother’s face as she finds out that “Indian food isn’t necessarily hot, now, is it?” 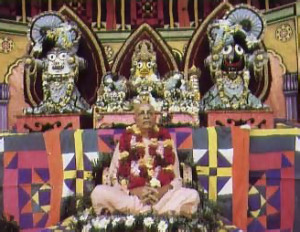 At the festival in New York, a statue of Srna Prabhupada sits at the feet of Lord Jagannatha (right) and His expansions-His brother, Balarama (left), and His sister, Subhadra (center).

And, of course, the news media came. How often do they get to see an elephant, after all? Much less a painted one? Weekend radio and TV. . . ABC, CBS . . . the Washington Post, the Los Angeles Times and Herald Examiner . . . neighborhood newspapers too, they pick up the story . . . the Hare Krsnas are at it again.

On the front page of the Indian Express, one of the largest daily newspapers in India, a reporter covering the Madras festival comments on the change of parade routes requested by Madrasi police officials, who felt that a procession through the Muslim areas would be inadvisable. “An ISKCON member, however,” continues the reporter, “said that they had no qualms about going through either Muslim or Christian localities.” No, not a qualm. Why? Because, after all, “Jagannatha” means “Lord of the Universe.”