Don’t be a Victim

By properly using your intelligence,
you can escape from the forces of
illusion and the dangers of
repeated birth and death.

by His Holiness Pusta Krishna Svami

Each day thousands of human beings are born, and each day thousands die. In fact, this material world has been described as a vast ocean of birth and death. Anyone struggling to stay afloat in a vast ocean is sure to be defeated in due course of time, unless a ship comes along and gives him shelter, for no one can swim indefinitely in the middle of the ocean. Both animals and human beings are struggling in the great ocean of birth and death, and although their activities differ, in the end the human body and the animal body are equal: both are annihilated. We should know that from the moment we are born, death is certain. Therefore, the so-called struggle for existence is like the squirming of a man about to die by the guillotine.

What makes a human being lose sight of this fact? There is a conversation in the Vedic scriptures between two great souls—Maharaja Yudhisthira, a mighty king who lived 5,000 years ago, and Yamaraja, the lord of death. Both were learned transcendentalists, and they were discussing the condition of men in the material world. Yamaraja asked Maharaja Yudhisthira, “What is the most wonderful thing in this material world?” King Yudhisthira expertly answered, “The most wonderful thing is that a man sees everyone dying around him-parents, friends, well-wishers, even animals—and still he is thinking that he will not die.” This is called illusion, or maya (“that which is not”). Because a man thinks he is immune to death, he misuses and spoils his valuable human life.

Human life differs from other forms of life because a human being has a greatly developed intelligence. Generally, eating, sleeping, mating and defending make up the entire field of an animal’s activities. Human beings also eat, sleep, mate and defend, but they have another, special function: to use their developed intelligence to understand the Absolute Truth. The Vedanta-sutra, a renowned philosophical work, informs us of the prime duty of human life: “athato brahma-jijnasa.” Brahma-jijnasa means inquiry into Brahman, or the Absolute Truth. “Athato” means immediately, now that we have human intelligence with which to understand our actual position and the position of Brahman.

According to Bhagavad-gita, living beings differ from the material energy, just as a man differs from the clothes he wears. We are not the material body, nor does our existence depend upon the material body. We are each a pure spiritual soul, a part and parcel of Krishna, or God. Because we have misused our tiny independence, we have come under the control of His external energy, called maya. Therefore when we die the quality of our desires forces us to accept another material body in one of the various species of life, including trees, animals, birds, insects, reptiles, humans and so on. These different bodies are awarded to us by God through the agency of His material energy because of our desire to enjoy materially in one way or another.

The human form of life is a special opportunity to understand transcendental science and become free from repeated birth and death. Actually, the soul does not change, and so we feel our unchanging identity throughout our life; constant changes are due only to our material bodies. The soul transmigrates through material nature in different varieties of bodies by virtue of his material desires. Although the eternal soul is by nature full of bliss and knowledge, these bodies give rise to the varieties of happiness and distress in this world.

Great sages have compared human life to a great sum of wealth. One should know how to spend this human life properly, without squandering or hoarding its energy. According to the Garga Upanisad a man who quits his human body like a cat or dog, without having sufficiently inquired into the Absolute Truth, is considered to be a krpana, or a most miserly man. The members of the International Society for Krishna Consciousness, therefore, are simply trying to educate people about the great boon of human life. If one is sincere, he can use this human life to achieve the greatest benefit—the revival of his eternally blissful pure consciousness—and escape from the round of birth and death in this miserable material world. 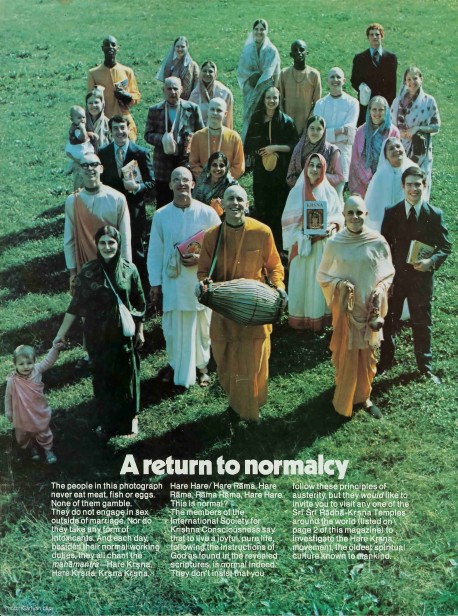