An Age-old Tradition Comes to the Western World

In India, people have worshiped the Lord’s form for centuries,
and now the practice is flourishing in the West. 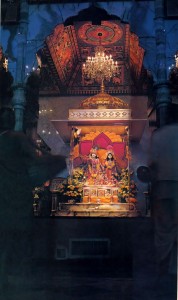 When Krishna the Supreme Lord appeared five thousand years ago to enact His pastimes, good people rejoiced to be in His presence, to live on the same earth with Him. Yet, when Lord Krishna no longer visibly walked the earth, how did these people, His devotees, react? We’d expect that they were unbearably lonely. But for thousands of years devotees in India have known that we can personally see and serve the Lord in His Deity form. Now, to the Western mind this idea may seem unfamiliar, but it’s easy to understand. For instance, the post office may be far from our homes, so the postal officials install authorized mail boxes around the city for our convenience. Those boxes are as good as the post office itself. Similarly, the authorized form of the Lord is as good as the Lord Himself, and the Lord, in His form as the Deity, accepts the service we offer Him. Although the average person might suppose that the Deity only represents the Lord, the mature devotee understands that the Deity is the Supreme Lord Himself. For that reason, he worships the Deity with respect and love.

Since 1966, the International Society for Krishna Consciousness has started more than eighty temples worldwide to share the open secret of Deity worship. The Deities pictured at right stand on the altar of the temple at ISKCON’s Los Angeles community, New Dvaraka. (Dvaraka is a city in India where the Lord performed many heroic activities during His advent on earth five thousand years ago.) The Deity on the left is Dvarakadhisa, “The Lord of Dvaraka.” Just like royalty, Lord Dvarakadhisa and His queen, Srimati Rukmini-devi, enjoy the best of everything: a gorgeous room, an elaborate wardrobe of morning, evening, and nighttime clothes, and all kinds of personal service. 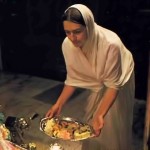 Every morning at 4:15 A.M., Labangalatika-devi dasi gently places on the marble altar a silver plate laden with milk sweets and slices of fruit. Then she offers the food to the Lord by reciting prayers. (The devotees make seven such offerings throughout the day.) “It’s not that God becomes hungry,” Labangalatika explains. “Krishna is complete in Himself. He doesn’t require anything from us. But if we serve the Lord in some way, if we please Him, then by His grace we can understand Him.”

From 8:45 to 11:00 A.M., the doors to the Deities’ room remain open so that anyone can come, offer respects, and perhaps offer some fruit or flowers for the Lord’s pleasure. 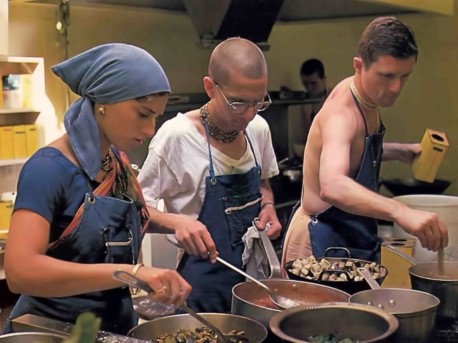 By 11:00 A.M., the largest offering of the day is ready. Generally, this offering consists of twenty-five dishes (including succulent vegetables, thick creams, breads, sweets, rice, soup, and cheese), and on special days there may be as many as three hundred savory items. After the noontime offering, the Lord “rests” until 3:45 P.M., when the devotees greet Him with prayers and incense and frosted cakes, cakes floating in milk, rice pudding, nectar drinks, cheese pies, cookies, honey, and other things. Preparing all this food requires a team of ten devotees working nearly ’round the clock, seven days a week. 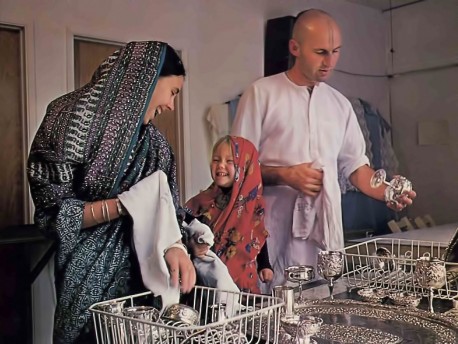 Seven full offerings a day also means a lot of dishwashing, and Racitambara-devi dasi and her family help out. “When I first came to the temple, Deity worship didn’t attract me,” she says, “but now it’s my favorite work. Sometimes nondevotees argue with me, ‘God is everywhere. Why must I come to the temple to worship Him?’ I explain that God is everywhere—the entire creation is His energy—but it’s very difficult to see God everywhere, and it’s impossible to serve Him like that. Therefore, the Lord kindly appears as the Deity, so that we can serve Him with our body, mind, and words.” 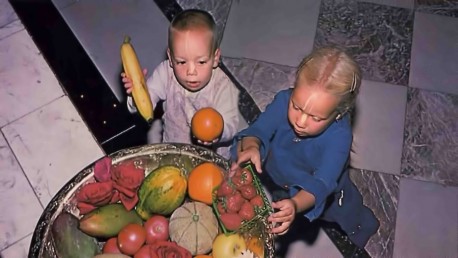 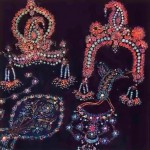 “After decorating the Deities with store-bought jewelry for two years,” says Lal Krishna dasa, “I got an inspiration and a desire to personally handcraft Their jewelry. I didn’t have any experience; so I got a book and some basic tools, and Krishna provided the intelligence.” At first a part-time experiment, Lal Krishna’s jewelry-making soon turned into a full-time engagement. 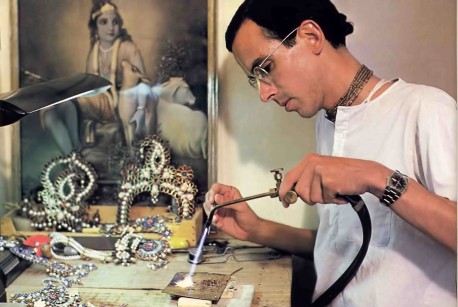 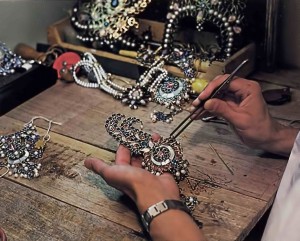 One necklace takes three or four days of designing and crafting, and a whole set of jewelry (including crowns, necklaces, chokers, bracelets, foot-bells, and earrings) might take a month. But Lal Krishna’s determination and devotion are unswerving. “High-class people have everything custom-made,” he reasons, “and Krishna’s the highest-class person of all.” 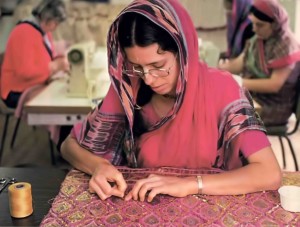 Along with a few other devotees, Tungabhadra-devi dasi spends her whole day making the Deities’ beautiful clothing. The elaborate outfits of silk, satin, velvet, and chiffon reveal expert designing and exquisite hand-tailoring. Even so, the seamstresses never feel complacent. “Spiritual life is never stagnant or static,” Tungabhadra explains. “We’re always trying to improve the quality of our service.” 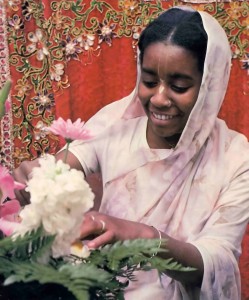 Flowers add a fragrant dimension to Deity worship. The devotees use artistic combinations of mums, roses, gardenias, and carnations to decorate the altar and garland the Deities. Dinesvara-devi dasi, a newly initiated devotee from Paris, spends her afternoons polishing the vases, arranging the flowers, and making the Deities’ garlands. “Since I started doing things for the Deities,” she says, “It’s easy for me to understand that God is not a threatening, foreign force—He’s a person.” Arati is a celebration of welcoming the Lord. 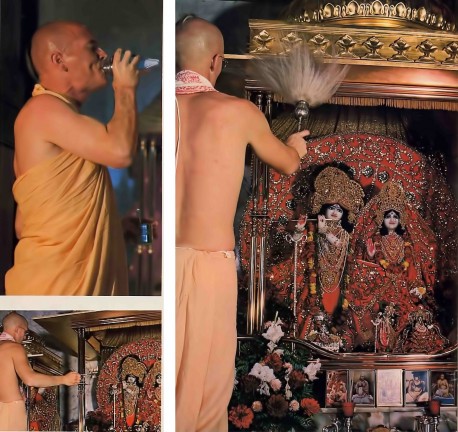 Just as we would help a guest feel at home by offering him gifts and refreshment, so the devotees offer the Lord incense, camphor, clarified butter, water, a napkin, a flower, and cooling fans. As the arati ceremony begins, a pujari, or priest, steps to the edge of the Deity room and sounds a conchshell heralding the celebration. Then he offers the incense sticks, the lamps of flaming camphor and butter, the water (in a conchshell), the napkin, the flower, the peacock fan, and the yak-tail whisk, in that order. The pujari presents the first five items to the Deities with graceful, circular hand motions. Then he sends pleasant breezes over Their Lordships with the fan and whisk. In the Los Angeles temple the devotees make seven such offerings at regular times each day. 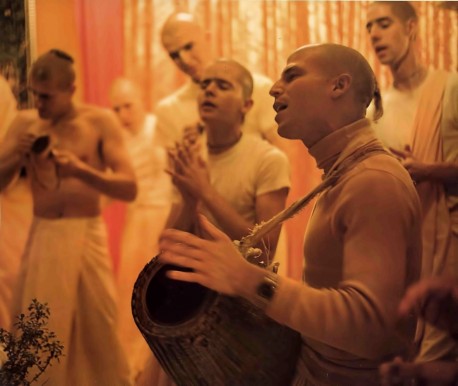 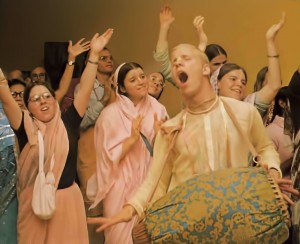 In contrast with the quietly reverent pujari, the devotees in the temple room are exuberant. As the half-hour arati starts, the lead singer chants prayers and the congregation joins in responsively, all to the accompaniment of rhythmically ringing hand cymbals and pulsating mrdangas (oblong clay drums struck from both ends). At first the group simply sways from side to side, in time with the singing. But soon the pace quickens, and some people start dancing as the music moves them. In a moment others have caught up the mood. The joy is contagious. Even a newcomer watching the bright-faced devotees (as they laugh, clap, jump, and whirl with arms upraised) can see that here is another dimension, where Krishna is the heart of everything and transcendental bliss prevails.