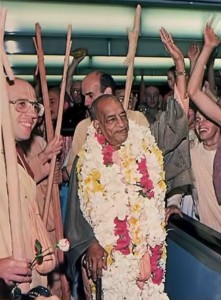 At 9:00 p.m. on June 1, His Divine Grace A.C. Bhaktivedanta Swami Prabhupada stepped from a plane at Los Angeles International Airport and began his summer tour of the United States. Greeting him were hundreds of his disciples from the many West Coast Krishna conscious communities. Srila Prabhupada stayed ten days at the Los Angeles Radha-Krishna temple (the most populous of the more than eighty centers throughout the world) and then flew on to centers in Toronto, Pittsburgh, New Vrndavana (West Virginia), Washington, and New York.

While in Los Angeles, Srila Prabhupada explained his broad vision of the Krishna consciousness movement to reporter Richard Dalrymple, religion writer for the Los Angeles Herald Examiner: “Just as in my body there are different parts, but the most important part is the brain, so the important section of society is made up of those who are fully God conscious. You can cut off my hands or my legs and I shall live. But if you cut off my head, 1 must die. At the present moment there are big scientists and skilled technologists; they are society’s hands and legs. But there is no brain. Therefore, in one sense it is a dead society. So we are trying to bring America back to life by supplying the brain. If America takes Krishna consciousness seriously, other nations will follow. Make a ‘United Nations’ for God consciousness and all people will be benefited.”

New Temple Under Way in Fiji

On May 9, Srila Prabhupada laid the cornerstone for a majestic temple in Lautoka, Fiji. The new facility will be known as the Krishna-Kaliya temple, in commemoration of Lord Krishna’s pastime of punishing the great serpent Kaliya, during His advent five thousand years ago.

Before the ceremony, ISKCON devotees chanted Hare Krishna and danced in a large procession through Lautoka’s main street.

At the stone-laying ceremony, hundreds of leading Fijians (including Lautoka’s Mayor Hari Punja) listened attentively as Srila Prabhupada explained what principles the Krishna consciousness movement upholds, and how it is working to propagate those principles throughout the world.

There’s one science that nearly all of us want to know about: the science of the self. The Eastern counterpart of what Westerners call psychology is yoga, the science of linking the self with the Supreme Self—a treasure long “locked away” in the Sanskrit language of ancient India’s Vedic literatures. No wonder, then, that His Divine Grace A.C. Bhaktivedanta Swami Prabhupada’s word-for-word translations and clear-cut explanations of the Vedic literatures have won the acclaim of psychologists.

Dr. James N. Mosel, Emeritus Professor and Chairman of the Department of Psychology at the George Washington University, says this about Srila Prabhupada’s Bhagavad-gita As It Is: “To the psychologist, the Bhagavad-gita is of great interest because it is perhaps the most ancient account on record of a remarkable psychotherapeutic session, administered to a ‘patient’ suffering from what today some would call ‘ontological anxiety.’ Swami Bhaktivedanta’s translation is most useful in gaining an understanding of the psychological doctrine involved. . . . The translation affords the reader a rare and most welcome balance between the document’s literal psychological content and its philosophic import.”

Garry Gelade, Professor of Psychology at England’s Oxford University, makes this appraisal of Srila Prabhupada’s Srimad-Bhagavatam: “This is a book to be treasured…. The clarity and precision of his commentaries on the text can rarely have been equalled. No one of whatever faith or philosophical persuasion who reads this book with an open mind can fail to be both moved and impressed.”