Back to Godhead > Devotees > Chanting > World Sankirtana Party “There is no other alternative in this age.”

World Sankirtana Party “There is no other alternative in this age.” 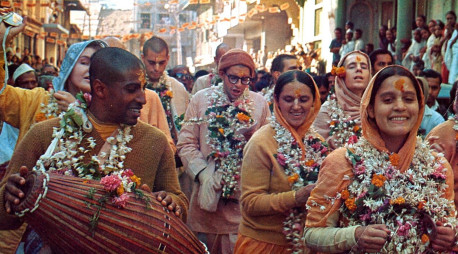 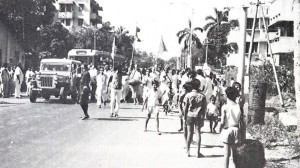 These events are historic in the annals of Vaisnava history, since the whole town of Surat was situated on the sankirtana platform. Everywhere we went, people chanted with us, and at nighttime they would construct a large planked stage on a street, and thousands of devotees would come and hear Srila Prabhupada and chant with us. We would chant, weaving through the streets of the town, which seemed to be broken up into little villages. 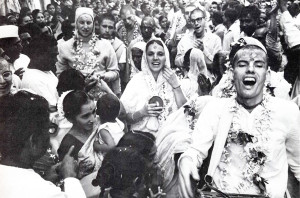 In Nagar our sankirtana route was planned, and people lined the streets waiting for us. Sometimes they would put cloth on the ground or drape cloth overhead. They would throw rice and put sandalwood on our foreheads to cool us off, and then red kumkum would be applied also or thrown in the air in powdered form, and each few yards women would come and garland us, so much so that we would have to take the piled up garlands off, since there were so many of them that our vision would be impaired. 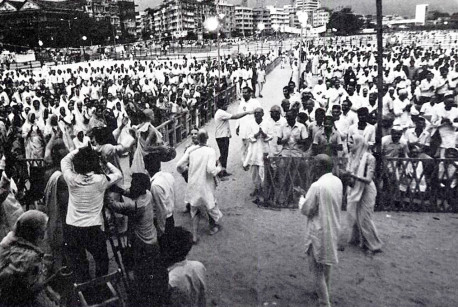 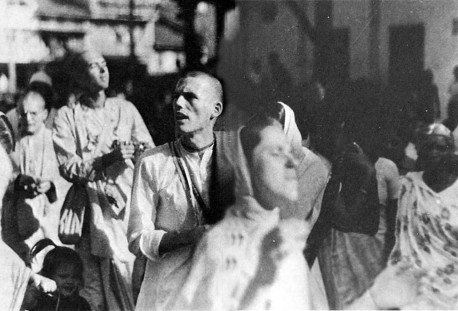 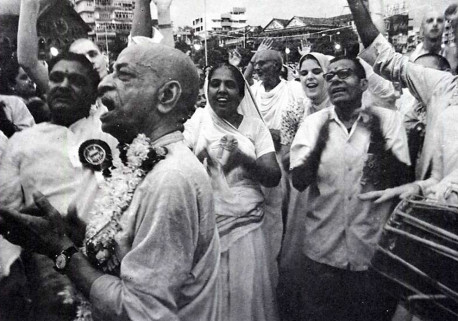 And when we threw the beautifully scented garlands to the air, waiting devotees of Surat scampered to have one of the flowers. The procession wove on, and Dinanatha constantly threw flowers in the air, and Gopala Das took sandalwood and applied it to everyone who came to garland us. Yamuna and Kausalya and Madri Dasi danced in little circles and transcendental pirouettes, shoulder to shoulder, in and out, out and in, whirling to and fro, Hamsaduta drumming with Tamala in pulsing fashion. Stokala from Hawaii danced up and down, Sarasvati with her arms in the air shouted Haribol on Syamasundara’s shoulders, the crowd embraced us from all sides. The intensity of the kirtana increased and increased and increased, and everyone, due to the sheer numbers and enthusiasm of those present, took an active part. “East is east and west is west and never the twain shall meet” was rendered meaningless on these historic days of wonderful, vibrant kirtanas. 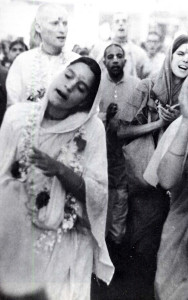 When it was time for our program, we simply looked at Srila Prabhupada, and he said, “Begin chanting,” and we did. As usual the holy names filled up the lost groping hearts of all around, and even some of the impersonalists danced, and the faces of the people changed from grey to a nice reddish due to bright attentive joy. We got up from the stage and danced, and they got up from their seats and danced, a duplication of many such experiences in the United States and Europe. But here the people were reacting to something that was lost to them and now returned to them, as if some pure childhood experiences were filling their heads and hearts. We had only known Snow White meets Prince Charming, but they had known Hari Nama Sankirtana, and they were now experiencing this again after many years abstinence. All over India the have been poisoned and have forgotten, and it is our task to bring them one-pointed purity as it is, to replace the quagmire of imaginary grasped-at happiness that now abounds. And then in the midst of our explosion of holy names, His Divine Grace A.C. Bhaktivedanta Swami Prabhupada stood up and danced. The place was surcharged with spiritual energy, and even hard Westernized reporters cried in ecstasy. Srila Prabhupada then gave a short ten minute talk about the value of sankirtana and how it had changed our lives in the West. Like a proud father. he was showing us off. 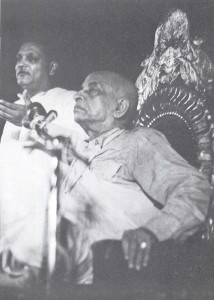 His Divine Grace explained that sankirtana is the purifying agent in this age. Srila Prabhupada’s talk was shorter than anyone else’s, but more packed full of spiritual information.

The next day this Sadhu Samaj went on, but we were not invited back; rather, we were requested not to come back, since our kirtana disrupted the mental speculators’ verbose lectures, in which they belabor one fine point after another but never understand the spirit soul.

Srila Prabhupada said about these kind of Vedantists at another meeting, “They will labor so hard over one point without coming to any conclusion, and we will reach God by eating.” (And he popped a piece of prasadam into his mouth as an example.)