Introduction to the All-India Issue 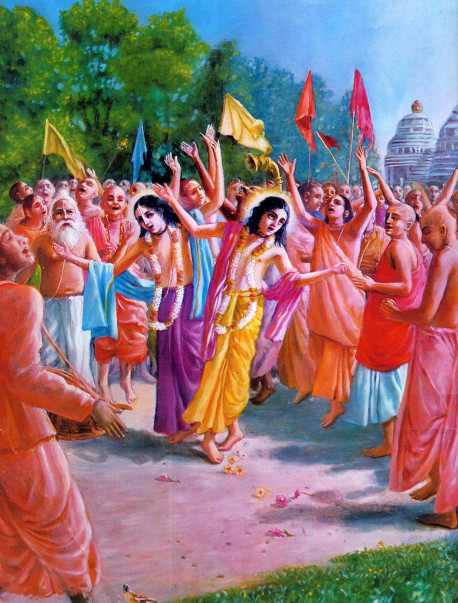 Lord Sri Krsna appeared 500 years ago as Lord Caitanya, a pure devotee, just to teach us how to love Krsna. His ecstatic method of sankirtana (dancing and chanting Hare Krsna) is the recommended way to achieve spiritual happiness in this present age of hypocrisy and quarrel.

India has always been known as a holy land long before the advent of Lord Caitanya Mahaprabhu, who originated the Hare Krsna movement 500 years ago. Lord Ramacandra, who was the incarnation of the Supreme Lord in the role of the perfect king, actually walked on this land millions of years ago when it extended as the kingdom of the whole world. His activities are recounted in the Ramayana, which is accepted by all transcendental authorities as authentic scripture. The most pious and learned devotees of the Lord have resided in India and taught there. The appearance of the incarnation of Lord Buddha was foretold in the First Canto of the Srimad-Bhagavatam, Chapter Three, verse 24, written 2,000 years before Buddha’s birth: “In the beginning of the Kali-yuga, the Lord will appear as Lord Buddha, the son of Anjana, in the province of Gaya, for the purpose of deluding persons envious of the faithful theist.”

India is therefore the land where the religion of Buddhism sprang forth. For his special mission, Lord Buddha rejected the Vedas, and therefore the authority of the scriptures had to be reaffirmed. This was done by the great spiritual master Sankaracarya, who drove Buddhism from the land of India by his brilliant explanations based on the Vedic literature.

According to Srimad-Bhagavatam Lord Krsna is Himself the source of all the incarnations. The self-same Lord Krsna appeared in His original form, also on Indian soil, 5,000 years ago when He exhibited full-fledged activities as the Personality of Godhead in the provinces of Vrndavana and Mathura. As it is said, God is great. The true vision of His pastimes and His greatness was then displayed to all living entities on this planet, and it is all recorded in the book Krsna, the Supreme Personality of Godhead, by His Divine Grace A.C. Bhaktivedanta Swami Prabhupada.

It is even stated in a recent book called the Aquarian Gospel that Lord Jesus Christ declared by the New Testament of the Holy Bible to be the son of God, also spent some time in India and worshiped in Jagannatha Puri.

India is naturally pious, and throughout the villages of India the people still remain God conscious. But this present age is an impious age. It can be checked only by dependence on the Lord and His devotees and by following the benediction of this age. The leaders of India have in recent history rejected the transcendental culture of the Vedas, which points out that everything is actually spiritual. This material world is simply temporary and is inherently miserable, due to birth, death, disease and old age. The human form of life is therefore meant for realizing God, even by working at one’s occupation; the whole society has to aim at realization of God through its activities.

Instead of following this path, called varnasrama-dharma, the Indians, influenced by the attraction of foreign city life, have rejected their original culture and tried to be happy by following the materialistic ways of the great countries of the West such as the United States. The danger in their rejecting this Krsna consciousness while in the human form of life is expressed in the Bhagavad-gita. One may slip down to the lower forms of life in the future births.

We are all spiritual by nature, but we have become covered, like a mirror becomes covered by dust. Especially for this age, Lord Caitanya, the incarnation of Krsna who is appearing as a devotee in order to teach, has given a very simple method. Everyone should chant the holy name of God, and everyone can do it in any position of life. He has especially stated that anyone born in India has the responsibility to take up this chanting and spread it, and He has quoted scripture to state that there is no alternative for spiritual realization in this age than chanting the holy name of God. It is therefore concluded that spiritual life is urgently needed, and this method should be taken. It is very easy and is being taught by Krsna Himself, yet it has been rejected in India. By the line of disciplic succession, the Brahma-sampradaya has passed down this information; despite the corruption of the present age, it remains pure and intact.

Since the incarnation of Lord Caitanya, the spiritual masters in this line are Rupa Gosvami, Raghunatha, Jiva, Krsnadasa, Narottama, Visvanatha, Jagannatha, Bhaktivinode, Gaura Kisora, Bhaktisiddhanta Sarasvati and now His Divine Grace A.C. Bhaktivedanta Swami Prabhupada. Although the teachings are intact, unfortunately the philosophers of the impersonal school have misinterpreted the Vedic philosophy to deny the existence of the Supreme Personality of Godhead. They have given all attention to the impersonal aspect and thus have wreaked havoc.

This is not a theoretical disagreement on theology, but it concerns all humanity. If there is no understanding that God is the Supreme Person, then people in general are led to believe that there is no God, or they are told that if there is any spiritual existence at all, then this implies that every man is God, and that he can do as he likes, without worshiping the supreme authority of the Supreme Personality of Godhead. In the impersonal philosophy of the Absolute Truth there is no ultimate love. There is no reason to stay on the spiritual platform; therefore intoxication and sex life enter and take over, and both the impersonalist teachers and their students glide to the hellish path.

There are real spiritual individualities and spiritual activities according to the Bhagavad-gita, but if one does not take to them then one must take to material individuality, which is temporary and leads to lower births. Seeking to become one with the Supreme in nirvana is not a substitute for the permanent positive happiness which the spirit soul is seeking. One has to engage in spiritual life in service of the Supreme Lord under the direction of a spiritual master, or else he must return to the material platform.

Thus it is stated that in order to wipe out impersonalism and to present an easy to perform process of devotional service to the people in this age, Lord Caitanya appeared. In Bhagavad-gita Lord Krsna states, “Just surrender to Me,” but Lord Caitanya was even more merciful. His movement is simply joyful. His program is listening to Bhagavad-gita and Srimad-Bhagavatam, chanting Hare Krsna and feasting on prasadam (spiritual food).

The Krsna consciousness movement is not a Hindu or national culture, but it is the worship of the Supreme Personality of Godhead who is the father of all living entities. The attainment of the eternal, peaceful, happy state of loving service taught by Lord Caitanya can bring the solution to all the problems of life that has not been attained by technology, politics or modern science. 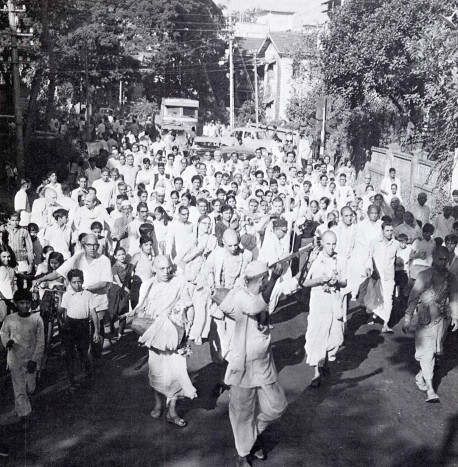 Wherever the devotees went in India they were favorably received by great crowds.