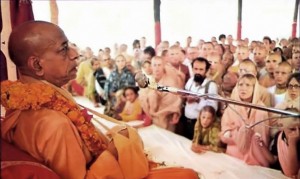 Srila Prabhupada with disciples and well-wishers at New Vrindavan. The spiritual master is honored as the representative of God.

OF COURSE those who are my students know what this ceremony is, but I shall inform those who are visitors something about this ceremony so that it may not be misunderstood. Outsiders may see and wonder why this person is being worshiped like God, and there may be some doubt. Actually this ceremony is etiquette, and it is called Vyasa-puja. Vyasa is the original author of Vedic literature, and he is an incarnation of Narayana [God]. It is he who gave us all Vedic knowledge, and he received the knowledge from Narada. Narada received the knowledge from Brahma, and Brahma received it from Krishna. In this way, by disciplic succession, we receive transcendental knowledge.

Five thousand years ago, before Vyasadeva, there was no need of written literature. People’s memories were so sharp that they would remember for life whatever they had heard from the spiritual master. In this age of Kali-yuga, however, we are reduced in bodily strength, power of memory, feelings of sympathy for others, duration of life, and religious propensities. In this way we have degenerated in this age. We can understand this very easily. Formerly when a person was attacked, many people would come to help him, asking, “Why is this man being attacked?” However, at the present moment if a man is attacked, passers-by will not care because they have lost their sympathy for others and their sense of mercy. Our neighbor may starve, but we don’t care. Formerly, however, there was sympathy for other living entities, even for an ant. For instance, when Maharaja Pariksit was touring his kingdom and saw a man trying to kill a cow, he immediately drew his sword and said, “Who are you? Why are you killing a cow in my kingdom?” The government is supposed to give everyone protection; it is not that the government is meant to give protection only to human beings and not to animals. Because it is Kali-yuga, however, the government discriminates between two nationals. A national is one who has taken birth in a country. The trees, aquatics, flies, reptiles, snakes, birds, bees, human beings-everyone born in the land was formerly protected by the government. Why should the government give protection to one type of living entity and neglect others? This means that human beings have lost their sympathy for other living entities, and this is one of the characteristics of Kali-yuga. Before the advent of Kali-yuga, even an ant would not be killed unnecessarily. There was one instance of a hunter who killed many animals, but when he became a devotee, he was not prepared to kill even an ant. Thus this Krishna consciousness movement is so nice that it makes a person perfect in knowledge, perfect in strength-perfect in everything.

This process by which one can make life perfect is coming down from Krishna. Krishna is the origin of everything, and therefore knowledge of perfection is also coming from Him. Periodically (after millions and millions of years) Krishna comes. He comes once in a day of Brahma, and a day of Brahma is so long that it is difficult to calculate. According to Krishna in Bhagavad-gita:

Thus Brahma’s one day is about 4,320,000,000 years. This means that Krishna comes once every 8,640,000,000 years. Why does He come? He comes to show how a human being should live in order to make his life perfect. Krishna comes thus once in a millennium and imparts perfect knowledge in Bhagavad-gita. This perfect knowledge that comes from Krishna is distributed by parampara, disciplic succession. The example may be given of a ripened mango at the top of a mango tree. If the mango is dropped, it will be lost; so the mango is handed from one person to another, from one limb to another, until it is brought down. I n the same way, Vedic knowledge is taken from authority coming down through disciplic succession. As stated, Krishna gives the knowledge to Brahma, Brahma gives it to Narada, Narada gives it to Vyasadeva, Vyasadeva to Madhva Acarya, Madhva Acarya to his disciplic succession, later to Madhavendra Puri, to Isvara Puri, to Lord Caitanya Mahaprabhu, to the six Gosvamis, to Srinivasa Acarya, to Jiva Gosvami, to Krishnadasa Kaviraja Gosvami, to Narottama dasa Thakura, to Visvanatha Cakravarti, to Jagannatha dasa Babaji, to Bhaktivinoda Thakura, to Gaurakisora dasa Babaji Maharaja, and then to my spiritual master, Bhaktisiddhanta Sarasvati, and now we are distributing that same knowledge.

It is not that we manufacture knowledge. How can perfect knowledge be manufactured? To manufacture perfect knowledge, we must be perfect, and, being in the conditional state, we are conditioned by four defects. The first defect is that we commit mistakes. Of all the people who are seated here, there is not one person who can claim that he has never committed a mistake in his life. That is natural; to err is human. To commit mistakes is not unusual; it is indeed the usual thing. Even illustrious personalities like Mahatma Gandhi committed so many mistakes. Another defect in the conditioned living entity is the tendency to be illusioned. This means accepting one thing to be something else. For instance, we accept this body to be ourself, but it is not. From this false conception, all the trouble in the world comes. People are thinking, “I am American, I am Indian, I am Russian, I am man, woman, dog, cat, etc.” This is illusion because we are not these bodies. We can understand this at death when one’s relatives cry, “Oh, my son is gone! Oh, my daughter is gone!” The body may be there, but we lament that the person is gone. Thus after death we can understand that our father or son was not this body; he was something else. Mistaking the body to be the self in this way is called illusion.

Another defective characteristic of the living entity is the propensity to cheat. Everyone is trying to cheat others. When businessmen make agreements, they try to make the agreement in their favor. One person is thinking that he is so clever that he is cheating the other, and the other person is thinking in the same way. The cheating propensity is there, even between the husband and wife, and sometimes between father and son, what to speak of other relations. Finally, the fourth defect of the living entity is that he has imperfect senses. We are very much proud of our sense of sight. Everyone says, “Can you show it to me? I want to see.” But what actually is our power of seeing? At night it is very difficult to see, and if there is a wall, we cannot see through it. Every day we see the sun as a small disc, but actually it is thousands of times larger than the earth. We cannot see anything situated a long distance from us, nor can we even see our own eyelids, which are actually covering the eyes themselves. In this way if we study every one of our senses, we will find that they are imperfect. If we are illusioned, if our senses are imperfect, if we have a cheating propensity, and if we are certain to commit mistakes, how can we give perfect knowledge? Since an imperfect personality can only give imperfect knowledge, there is no benefit in accepting knowledge from any ordinary living entity. If knowledge is imperfect, what is its use? A conditioned living entity can only theorize, but we don’t want theory. We want to know the facts. That perfect knowledge which is factual can only come from God.

One who distributes knowledge exactly as God distributes it, who distributes the same knowledge imparted by God, is also perfect. A postman may deliver us a hundred dollars, but we do not consider that the postman is giving us a hundred dollars. The money is sent by a friend, and it is simply the postman’s business to hand it over as it is, without taking anything or adding anything to it. His perfection is that he delivers the hundred dollars as it is sent by one’s friend. That is his perfection. The postman may be imperfect in so many ways, but when he does his business perfectly, he is perfect. Similarly, Vyasa-puja means that we are receiving knowledge from Krishna perfectly through the agency of the spiritual master. The spiritual master is the representative of Vyasa because he is delivering that same knowledge that is coming down by disciplic succession from Vyasa. Because he delivers that knowledge without change, he is offered respects one day out of the year on his appearance day as the representative of Vyasadeva, and this is called Vyasa-puja.

“The spiritual master is honored as much as the Supreme Lord because of his being the most confidential servitor of the Lord. This is acknowledged in all revealed scriptures and is followed by all authorities. Therefore I offer my respectful obeisances unto the lotus feet of my spiritual master, who is a bona fide representative of Sri Hari [Krishna].” (Sri Gurv-astaka)

All the sastras (scriptures) and Vedic literatures declare that the spiritual master is as good as God. It is not that he is God, but that he is as good as God. The Mayavadis or impersonalists think that the spiritual master is God, but we Vaisnavas (devotees) do not accept this. How can a man become God? Rather, because the spiritual master is God’s representative, he is honored as much as God. One should not think that he is offered respects because he has become God. Kintu prabhor yah priya eva tasya. It is just as when someone pats our son or dog, we become pleased. The spiritual master is a very confidential servant or dog of God; therefore if we can please him- yasya prasadad bhagavat-prasadah-God becomes pleased. If someone pleases our small child, we become automatically pleased. One may please a child with a two-cent piece of candy, but to please the father, thousands of dollars may be required. So the purpose of pleasing the father may be fulfilled by offering the son a two-cent piece of candy.

This, then, is the business of the spiritual master. One should not think that this person is sitting very comfortably and accepting all honor and contributions for himself. The honor and homage to the spiritual master are needed just to teach the student how to offer them to God. This is the sum and substance of Vyasa-puja. Thank you very much.