Back to Godhead > ISKCON > Temples > To Understand His Greatness

To Understand His Greatness

A survey of the transcendental accomplishments of the foremost spiritual teacher of the modern age, His Divine Grace A.C. Bhaktivedanta Swami Prabhupada 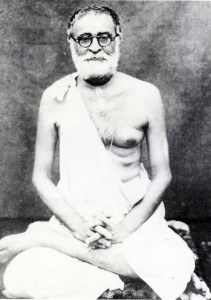 In 1965, at the age of 70, a devotee of Lord Krishna packed a metal suitcase with books and personal belongings, left his small room in India’s holy city of Vrndavana, and boarded the steamship Jaladuta to sail to the West.

He arrived at Boston’s Commonwealth Pier on September 18, 1965, with little hope that the American people would pay heed to the message of Krishna consciousness that his spiritual master had charged him to deliver. “Most of the people here, ” he wrote in a poem to Lord Krishna, “are covered by nature’s modes of ignorance and passion. I do not know how they will be able to understand Your transcendental message. ” He had no friends and nowhere to stay. He had brought only forty rupees and his books. “But I know that Your causeless mercy can make everything possible,” he prayed, “because You are the most expert mystic. . . .Somehow or other You have brought me here to speak about You. Now it is up to You to make me a success or a failure, as You like.” Now, nine years later, it is clear that Lord Krishna has made His Divine Grace A.C. Bhaktivedanta Swami Prabhupada an overwhelming success.

In 1966, after months of personal struggle, Srila Prabhupada rented a storefront at 26 Second Avenue in New York City. A few young students joined him, and with their help Srila Prabhupada formed the International Society for Krishna Consciousness (ISKCON). In his first storefront temple, Srila Prabhupada would lecture from Bhagavad-gita, distribute prasada (food that had been offered to Krishna), and lead his tiny group of disciples in chanting the maha-mantra-Hare Krishna, Hare Krishna, Krishna Krishna, Hare Hare/ Hare Rama, Hare Rama, Rama Rama, Hare Hare. 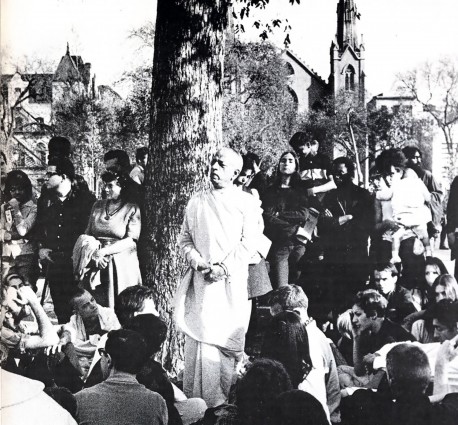 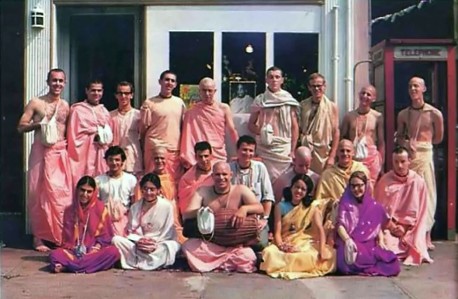 The basis of the movement is the Hare Krishna mantra itself-Hare Krishna, Hare Krishna, Krishna Krishna, Hare Hare/ Hare Rama, Hare Rama, Rama Rama, Hare Hare. This chanting-the most recommended means for spiritual progress in this age-cleanses the mind. Thus it enables one to transcend temporary designations of race, religion and nationality and understand one’s true identity as an eternal, spiritual living being. According to the Vedic literature, the eternal living being takes birth in one body after another in 8,400,000 species of life. But the chanting frees one from this cycle of birth and death. In an age where philosophical speculation simply leads to disappointment or confusion, the Hare Krishna mantra lifts one directly to spiritual knowledge. In other words, simply by chanting Hare Krishna one can directly experience self-realization. People are confused and misled because they look for happiness in the material world. But the chanting at once puts one in touch with Krishna, the reservoir of all happiness. Thus one becomes fully satisfied, and the pains and pleasures of material life become insignificant. The chanting of Hare Krishna, therefore, is the prime benediction for all humanity. Srila Prabhupada has introduced this chanting all over the world. 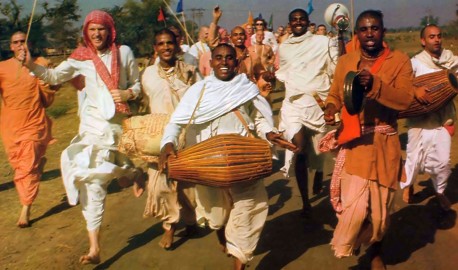 ISKCON devotees from around the world hold sankirtan, congregational chanting of Hare Krishna, in Mayapur, India, the birthplace of Lord Caitanya Mahaprabhu. Lord Caitanya is the incarnation of Krishna who stressed the importance of sankirtan for the modern age. 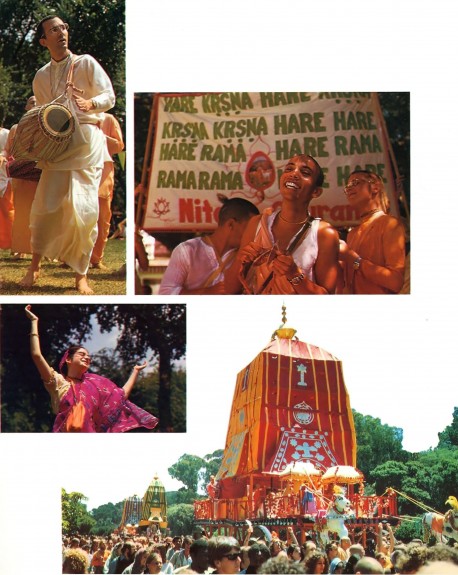 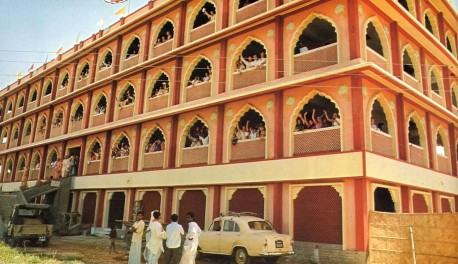 A view of the ISKCON international center on the holy island of Mayapur. The center has ample living space for five hundred devotees and guests. The sacred rivers Ganges and Sarasvati flow nearby. 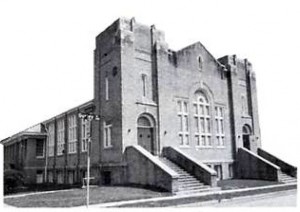 The main building of ISKCON’s Gurukul school in Dallas, Texas. 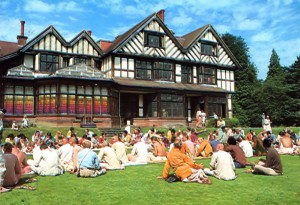 In 1968 Srila Prabhupada sent three married couples to London. Prabhupada’s own spiritual master had wanted a permanent center in London, and he had sent disciples to start one, but somehow they were unable to do anything. Srila Prabhupada’s disciples, however, drew immediate attention. “Krishna Chant Startles London, ” headlined the San Francisco Chronicle. Srila Prabhupada’s devotees chanted on the streets, in clubs and in private homes, they established a permanent center only a few blocks from the British Museum, and they made a record of the Hare Krishna mantra that became the number one song in all Great Britain. Srila Prabhupada sent other disciples to Germany and France, and soon the Hare Krishna movement was flourishing all over Europe. He later sent disciples to Africa, Australia, South America, Indonesia and Japan. Now there are more than 65 temples all over the world.

These temples are not simply places for devotees to live comfortably, eating and sleeping at the expense of the spiritual master or the public. Rather, they are active centers where everyone is busy working to serve Krishna–and, through Krishna, serve all living beings.

The temples fulfill two main functions. First, they are centers where people can learn about Krishna and get a taste for spiritual life by attending classes, festivals and other special programs. Second, they are colleges for training serious students to understand Krishna, the Supreme Personality of Godhead. Bhagavad–gita calls this the “king of education” because one who understands Krishna, or God, attains not only the most valuable knowledge but also the most perfect self-realization.

Two especially notable centers are the ISKCON temples in India’s holy cities Mayapur and Vrndavana. Vrndavana is the birthplace of Lord Krishna, and Mayapur is the birthplace of Sri Caitanya Mahaprabhu, the “golden incarnation” of Krishna who makes love of Krishna very easily available in our modern age of quarrel. Srila Bhaktivinoda Thakura, the spiritual master of Srila Prabhupada’s own spiritual master, wanted Westerners especially to have the chance to come to these holy places to cultivate Krishna consciousness. Srila Prabhupada has fulfilled Sri/a Bhaktivinoda’s wish. He has built wonderful temples with fully modern facilities so that now Westerners can visit these holy places without discomfort, absorb themselves in Krishna consciousness, and return home spiritually purified and refreshed. 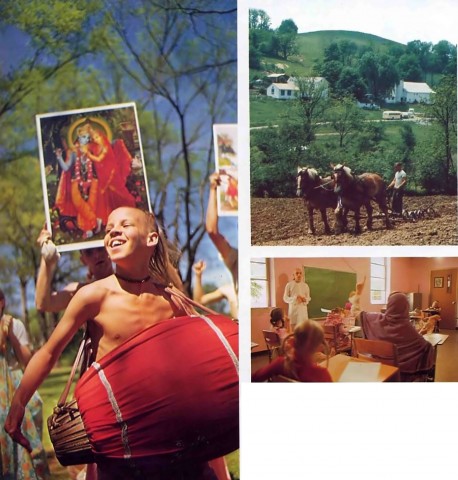 Sanskrit and a smile at Gurukul. The teachers, noted in the New York Times, are both strict and affectionate, and the children laugh easily.

Another of Srila Prabhupada’s projects is New Vrndavana, a 1,000-acre Krishna conscious farm community in the hills of West Virginia. First established in 1968, New Vrndavana provides the ideal atmosphere of a busy yet peaceful village fully devoted to spiritual progress. Moreover, it demonstrates how a Krishna conscious society engages each person according to his talents and propensities. In ISKCON’s temples in large cities, devotees work as preachers, or they employ their technical or professional skills in Krishna’s service. In New Vrndavana, however, devotees maintain the farm, grow crops and tend cows for Krishna. This illustrates how every individual can live happily in Krishna consciousness by working in the occupation for which he is most inclined.

Srila Prabhupada has also established the West’s first Krishna conscious school-Gurukula, a primary school in Dallas, Texas, for almost one hundred boys and girls between the ages of five and fifteen. The Vedic literature says that a human birth is a rare opportunity, for a human being has the intelligence with which to understand the ultimate purpose of life. Therefore from the very beginning a young child should learn how to love Krishna. Then he will be happy in both this life and the next. Gurukula, therefore, aside from teaching reading, writing and arithmetic, teaches a young child how to cultivate Krishna consciousness. Thus Sri/a Prabhupada is giving these children the chance to become not only expert in ordinary material affairs but spiritually enlightened as well. 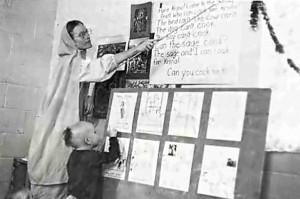 A child at Gurukul learns how to read–and how to be Krishna conscious.

Srila Prabhupada, furthermore, has brought Krishna-prasada to the Western world. Krishna-prasada is food offered to Krishna. According to Bhagavad–gita, eating food prepared only for the enjoyment of the senses implicates one, under the laws of karma, in a network of sinful reactions. But eating food offered first to Krishna has just the opposite effect. Simply by eating such prasada, one cleanses himself of the reactions to past sins, which are impediments to self-realization. Thus even if one cannot understand Vedic philosophy, or even chant Hare Krishna, one can advance in spiritual life simply by eating Krishna-prasada.

Srila Prabhupada’s most substantial contribution, however, is to be found in his books. His Divine Grace has written more than a dozen large philosophical books to explain the principles of Krishna consciousness in a logical, practical and scientific way. Srila Prabhupada’s books are not actually new. They are English translations of Sanskrit scriptures that are thousands of years old, But Srila Prabhupada is the first to present these scriptures purely, as they are, without changing their meaning to fit preconceived mundane notions. Now, consequently, for the first time, people are understanding the eternal wisdom of these ancient scriptures. They are therefore becoming devotees of Krishna. 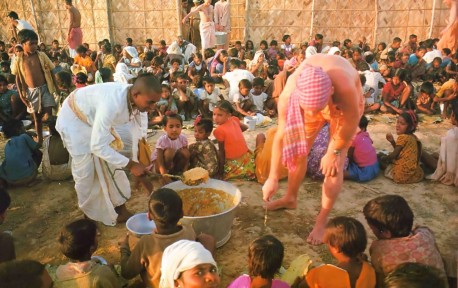 Devotees distribute full plates of prasadam to children in Mayapur, West Bengal. “You have my admiration and blessings for your selfless work.”–Kenneth Keeting, former US Ambassador to India.

Before Srila Prabhupada came to the West, more than seven hundred editions of Bhagavad-gita were available in English. But although scholars and philosophers studied Bhagavad-gita for hundreds of years, not a single person became a devotee of Krishna. But now thousands of people have read Bhagavad-gita As It Is, understood its message and thus become Krishna’s devotees. In this way they are finding unlimited bliss and satisfaction, and they are becoming eligible to get out of this material world and at the time of death go back home, back to Godhead.

Srila Prabhupada’s books give overwhelming evidence that the Supreme Personality of Godhead is Krishna and that Krishna consciousness is the supreme perfection of spiritual life. Too often, people have assumed that the Supreme is impersonal or void. Even people who believe that the Supreme is a person have had little idea of who that person is. But Srila Prabhupada has given explicit knowledge of the Supreme as the Personality of Godhead, Sri Krishna. He has explained in detail His name, form, qualities and pastimes and explained how to develop love for Him. Nowhere else can one find out precisely who God is, what He looks like, where He lives, and how He enjoys His pastimes with His devotees in the spiritual world. Therefore Krishna consciousness, by virtue of its completeness, its authenticity, the integrity of its Vedic logic and arguments, and its potency to invoke one’s dormant love of Godhead, surpasses all the other philosophies of the world. It is this supreme philosophy that is being freely distributed by His Divine Grace A.C. Bhaktivedanta Swami Prabhupada. 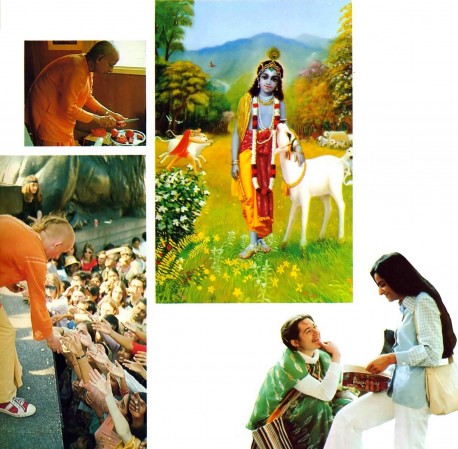 Srila Prabhupada prepares prasadam for a feast in ISKCON’s temple in Honolulu.
Tidbits of prasadam win eager acceptance at the Rathayatra festival in London.

It is the mercy and kindness of His Divine Grace that he has dedicated all his time and energy to give us the chance to know and love Krishna. We can only aspire to follow in his footsteps, for by his personal example he has shown the meaning of pure devotion. We have yet to fully appreciate Srila Prabhupada’s greatness and the greatness of the gifts he has given us. Moreover, Srila Prabhupada is always humbly unwilling to take personal credit for his accomplishments. “I am most insignificant,” he says. “But somehow or other I have tried to carry out the orders of Krishna and my spiritual master. Whatever success has come, it is only by their grace.” 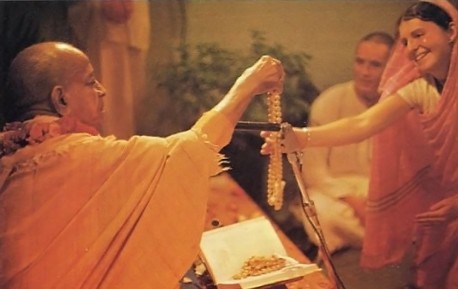 Srila Prabhupada initiates his disciples in the authorized Vedic way of spiritual understanding. He teaches as Acarya, a spiritual master who imparts the essence of Krishna consciousness both by precept and the ideal example of his life. 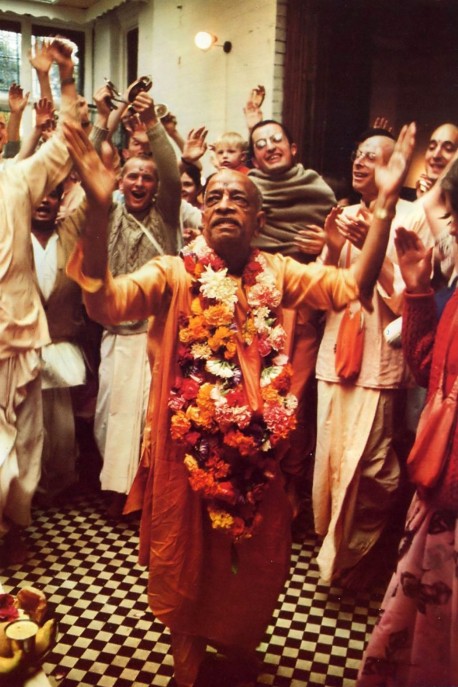