Back to Godhead > Science > Two Ph.D.’s for Krishna 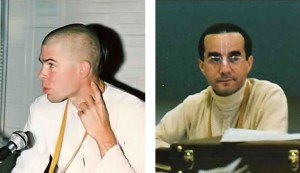 Sadaputa dasa:“They have faith in chance, and we have faith in God. That’s what it comes down to.”
Madhava dasa: “The materialists’ theory that matter is the source of life isn’t based on any observed data.”

BTG: You were both working scientists with Ph.D.’s when you joined the International Society for Krishna Consciousness. Madhava, you were a chemist at the National Bureau of Standards, Sadaputa, your doctoral dissertation had just been accepted for publication by the American Mathematical Society. These days we don’t usually see scientists like you advocating spiritual ideas. How did you come to accept the philosophy of Krishna consciousness as scientifically sound?

Sadaputa dasa: I pursued science for many years. The object of science, I felt, was to find out what the absolute truth is. Otherwise, what’s the use of research? So I primarily studied mathematics, which I saw as the basis of the other sciences. But by graduate school I had come to the conclusion that mathematics was not leading me to the truth, but to the void. It seemed to be only an arbitrary game of operations played with symbols on pieces of paper. I became frustrated because I realized there had to be something beyond mathematics, which didn’t make sense according to my scientific training, but which was nevertheless very important. So I investigated various sources of information outside the scientific realm—yoga, spiritual groups, and so forth—and then I came to Krishna consciousness. It was what I’d been looking for.

BTG: Do you think other scientists will be able to accept Krishna consciousness as you have?

Sadaputa dasa: Yes, if they consider it with an open mind.

BTG: What impact do you want your present work to have?

Madhava dasa: First, we want to expose other scientists to Krishna conscious ideas. Also, we think that people in general will also be interested in how two former academic scientists view Krishna consciousness. There’s a lot of interest now in the limits of science. More and more people are questioning science’s ability to solve the world’s problems. We’ve seen science’s ability to create problems. Now many people doubt it will be able to get us out of that situation. They feel that science has been overrated and they’re beginning to look at wider and wider perspectives to understand what’s going on. In psychology, the Gestalt movement has become popular because it doesn’t try to analyze consciousness in terms of behaviorism or atomism. In scientific theory we’re seeing a lot of emphasis on how the observer influences what he’s observing. In every scientific experiment, the consciousness of the observer has to be accounted for, but present theories don’t explain how. In addition, there are problems now in understanding the fundamentals of mathematics and of reason itself. There’s also a general trend toward trying to understand consciousness and the higher psychology of living beings. A recent study conducted by the American Association for the Advancement of Science showed a great deal of public interest in phenomena that can’t be explained by the known laws of science, such as psychokinesis, telepathy, Kirlian photography, and so on.

BTG: Could you tell us something about your present scientific work?

Madhava dasa: We’re trying to solve a fundamental problem—the problem of the origin of life. Today, most scientists say that matter creates life. But from our point of view—from the spiritual scientists’ point of view—it’s the other way around: life creates matter. We feel we have the advantage because we can observe life creating matter. For instance, a lemon tree can manufacture a drop of lemon juice. But of course a drop of lemon juice can’t create a tree. So we’re collecting the necessary scientific evidence to verify our everyday observation. On the other hand, the materialists’ theory that matter is the source of life isn’t based on any observed data. It’s simply a mental construct, a theory with no hard evidence to support it.

Sadaputa dasa: No. Some people say it does, but we disagree. Quantum mechanics is the most widely accepted theory on the structure of matter. It was developed in the period from 1900 to about 1930. If you look in the library, you’ll see that all the science books published today claim that quantum mechanics applies in every material situation. Most scientists say it’s universal, But actually, quantum theory has been empirically verified by only very limited laboratory experiments. Although quantum theory is great for simple situations like that, it’s not mathematically feasible to apply it to anything more complex. For instance, theoretical chemists admit that they can’t apply quantum mechanics exactly to any molecule more complex than the diatomic hydrogen molecule, which is a very simple molecule. All they can do is assume it will work with bigger molecules. But a law that applies to one molecule won’t necessarily apply to another. Still, they’re gambling that quantum mechanics will. And to make matters worse, they’re assuming that the human body, which is inconceivably complicated, functions according to the theories of quantum mechanics. Such an assumption is irresponsible. No one can say that the nerve cells of the brain, for example, work in that way. Well, no one should say it—but they do anyway. Many scientists even say there can’t be a soul because the presence of a soul would violate some “well-established” physical laws. But when you get right down to it, no one can tell if those laws really do apply to living organisms or not.

BTG: You’ve brought up an interesting question. Why do so many scientists take it upon themselves to defeat religion? They say that as mankind progresses in scientific knowledge, he no longer has any reason to believe in God or the soul. But you’re saying there’s nothing inherent in science to prove this.

Madhava dasa: That’s right. The materialists’ attitude is based on an error in judgment. They base all their work on the unspoken assumption that everything has an impersonal basis. In other words, their belief that we can explain everything in terms of matter is just that—only a belief, not the result of an experiment. When we analyze, a materialistic scientist’s statements, we find that his concept of matter is not empirical, as he claims, but metaphysical. So it seems that the materialists are simply trying to replace a spiritual religion with a material one, of which they will of course be the new high priests.

BTG: But haven’t the material scientists created life in the laboratory?

Sadaputa dasa: To my knowledge, the farthest they’ve gone, so far is to take apart a virus, put the parts into a test tube, and watch them recombine. Is this creating life? First of all, whether or not you can call a virus “life” is a difficult question. To many people, viruses seem more like chemicals than living organisms. Second, the scientists didn’t create the virus anyway. They took it apart, and when they juxtaposed the molecules. they recombined. Their accomplishment wasn’t so remarkable, really, although it took a lot of work.

BTG: Can you demonstrate in the laboratory how life creates matter?

Madhava dasa: Yes. Several investigators have observed a remarkable phenomenon called biological transmutation that is experimentally verifiable and that can’t be explained in terms of our present physical and chemical theories. It occurs every day, in animals and plants. Most scientists in modern textbooks don’t discuss biological transmutation because it doesn’t conform to their present theories. What happens is this: when you put a seed into soil and add water and nutrients, the seed begins to grow. Now, after a certain amount of time, the chemical composition of the germinated seed will be different from an ungerminated one. But after you analyze them, you see that this difference can’t be explained by any additions of water or nutrients, or by any chemical reactions we can infer. The chemical difference between the growing and nongrowing seeds has to be explained in some other way. And no one knows what that explanation might be. Somehow the living seed actually creates not only compounds, but also basic elements, out of other elements. This is comparable to what happens inside a nuclear reactor or a hydrogen bomb! To think that a tiny seed does this as a matter of course, by its life energy alone, is inconceivable to the materialistic mind. But anyone with an, open mind will admit that the process of life is a mystery to us; It’s beyond our present understanding. Life doesn’t obey the laws of chemistry or physics.

Furthermore, Heisenberg discovered in 1927 that beyond a certain minuteness of atomic structure, we can’t be certain of both the position and the velocity of particles. In other words, our ability to investigate the ultimate nature of things with our present methods is limited. Beyond that limited range, we have to say that the world is inconceivable. Besides that, especially at the atomic level, the instruments we use always disturb whatever we’re looking at. So we can’t really talk about the structure of nature as it is. All we can talk about is the structure of our investigations, which is a different thing entirely.

Sadaputa dasa: Yes. For instance, in Newton’s study of gravitation, he spoke of an attraction between two bodies separated by space. But what is it that goes through space to hold the two bodies together? No one has ever answered this question. When Newton first presented his theory of gravitation, scientists and philosophers rejected it as mysticism.

Madhava dasa: The conclusion is that within the universe there’s an energy at work, a life energy. We can’t see it, but it must be there. Many great scientists have concluded that the energy which moves the universe is spiritual. And they have accepted that there is a supreme controller behind the universe. Einstein thought that way. And so did Galileo.

BTG: But most scientists don’t think that way.

Madhava dasa: Right. They exclude God by assuming that the material energy is working on its own without any outside help. However, by analyzing the activity of the material energy, we can see that it doesn’t perform according to materialistic theories. Other elements must be considered.

BTG: Doesn’t the theory of evolution do away with the necessity for God, or any spiritual purpose, in the development of nature?

Sadaputa dasa: Evolutionists justify their views by saying, more or less, “if it didn’t happen our way, we’d be forced to accept a supernatural explanation, and that we refuse to do.” That’s their best argument. But how did the eye evolve? They say, “It had to evolve by chance mutations, because otherwise we’d have to suppose divine creation.” They have faith in chance, and we have faith in God. That’s what it comes down to.

One Response to Two Ph.D.’s for Krishna