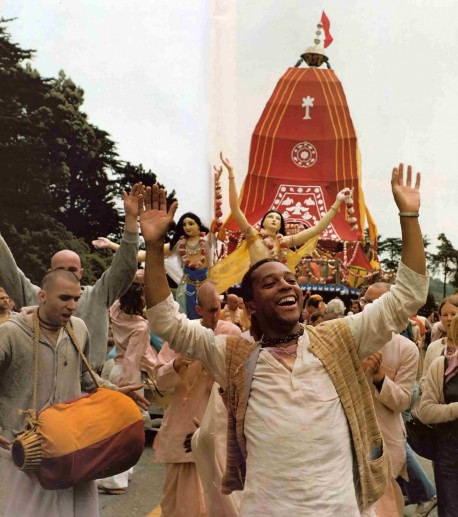 —the chanting rolls through the crowd in waves as the huge cars, with their towering canopies and colorful garlands, rumble along the city streets into the park. This is Ratha-yatra, the ancient Festival of the Chariots, glorifying Lord Jagannatha, the Lord of the universe. People have celebrated Ratha-yatra for thousands of years in Puri, India, and since 1966 the International Society for Krishna Consciousness has made this joyous festival an international event. United by the chanting of the holy names of God, people of all ethnic and religious backgrounds now celebrate Ratha-yatra in cities all over the world. Experience the spiritual excitement of Ratha-yatra in the festival city nearest you and read more about the transcendental science of Krishna consciousness in the pages of BACK TO GODHEAD.

The International Society for Krishna Consciousness (ISKCON) is a worldwide community of devotees practicing bhakti-yoga, the eternal science of loving service to God. The Society was founded in 1966 by His Divine Grace A. C. Bhaktivedanta Swami Prabhupada, a pure devotee of God representing an unbroken chain of spiritual masters originating with Lord Krishna Himself. The following eight principles are the basis of the Krishna consciousness movement.

We invite all of our readers to consider them with an open mind and then visit one of the ISKCON center to see how they are being applied inevery day life.