Back to Godhead > ~Featured~ > The Year-long Lunch 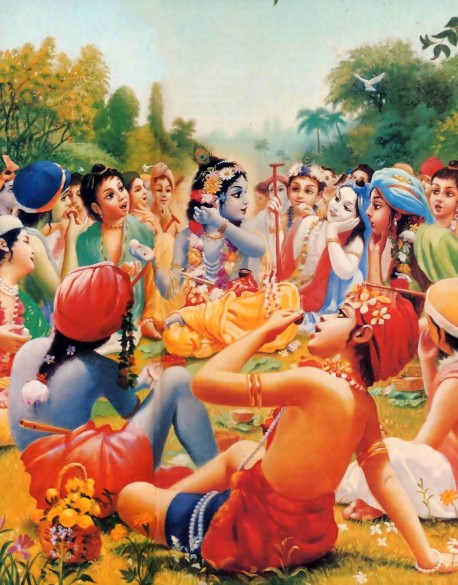 “Dear friends,” said Lord Krishna to the other cowherd boys, “Look at this wonderful place!” He’d brought them to the sun-dappled bank of the Yamuna River, after an adventurous morning in the pastures outside Vrndavana town. “This is an ideal place to eat our lunch. Afterward, we can play on the soft, sandy river bank.”

Krishna turned to the sparkling river and glorified its beauty. “See those lotus flowers in the water, their petals opened wide; and smell their fragrance drifting all around us. And listen—nearby in the trees the peacocks are calling out to one another, and their calls are mingling with the songs of other birds and the whispers of the leaves. This is clearly the best place for us to have our lunch. The calves can stay close to us, drink water from the Yamuna, and graze on the tasty grass.”

Krishna’s friends were glad to hear what sounded to them like a brilliant suggestion. It was late and they were feeling hungry, what’s more, they all agreed that Lord Krishna had found a perfect place for them to sit and eat. So they let loose the calves and arranged themselves in a big circle. Krishna sat in the center, and all the boys turned toward Him, so that while they ate they could see Him face to face. Krishna was like the whorl of a big lotus flower, and the other boys were like the petals. Together, they opened up the lunch boxes their mothers had given them early that morning. Then they began to eat and joke with one another.

But as the boys ate, their attention given completely to Krishna and the delicious food, they failed to notice that the calves had wandered away, allured by the fresh new grass of the deep forest. Soon the calves were out of sight entirely. When the boys discovered this, they became scared and called to Krishna for help, as they always did when they were in distress.

“Oh, Krishna!” they cried out. “The calves have disappeared! What should we do?”

“Don’t worry,” Lord Krishna answered. “And don’t interrupt your lunch. Go on enjoying. I’ll look for them Myself.” So, sparing His friends the trouble, the Lord got up and walked away to search for the lost calves. He spent much time in His search, looking in the thickets and the forests and in the nearby caves and mountain crevices. The calves were nowhere to be found.

But Lord Krishna, the Supreme Personality of Godhead, knew what was happening. He didn’t really have to look for the calves, because He knows everything. Still, He was playing the part of an ordinary human being—just to please His friends. So He knew exactly where the calves were, and He also knew they hadn’t left the river bank on their own. They’d been lured away by none other than four-headed Brahma, the demigod who directs universal affairs. And, as Krishna was enjoying climbing around the hills and looking in the caves, back at the lunch site Brahma was now using his mystic powers to steal the cowherd boys. Then he hid the boys and the calves in a secret place and put them into a long, deep steep.

Krishna was aware, too, of the reason why Brahma was playing these tricks on Him. Somebody had told Brahma that the Supreme Personality of Godhead was living in the little town of Vrndavana as a five-year-old boy named Krishna, the son of Nanda. On hearing this, Brahma was skeptical. So he hit upon a plan to test Krishna’s powers for himself. He thought, “After His friends and calves have mysteriously disappeared, what will this little boy Krishna do?”

The Lord asked Himself this question, but He was hardly at a loss for an answer. At once He manifested Himself in multiple forms—boys and calves who looked and acted precisely like the very boys and calves Lord Brahma had hidden. Each new boy was in fact Krishna, but had the bodily features and behavior of one of the original boys; and the same was true of each of the new calves. Appearances thus restored, soon the happy boys and calves were making their way back to town.

None of the townspeople in Vrndavana knew what had transpired that afternoon out in the pasture. They simply saw Krishna and His friends strolling into the village, casually tapping the calves with sticks to keep them in order, and raising up a cloud of golden dust in the late afternoon sun. There seemed to be nothing unusual. And, as always, the boys put the calves into their cowsheds and then went home.

Long before the boys arrived, the mothers had heard the sound of their flutes. Now the mothers ran out of their homes and embraced the boys. On account of their maternal affection, milk flowed from their breasts, and they allowed the boys to drink it. Although they didn’t know it, their offering was not to their sons but to the Supreme Personality of Godhead. Then the boys played at home, as usual. Also, during the evening the mothers bathed the children, decorated them with ornaments, and gave them the food they needed after a hard day’s work. In the cowsheds the mother cows, who had been away in the pasture during the day, now called the calves. The calves came joyfully, and the mothers licked their bodies. 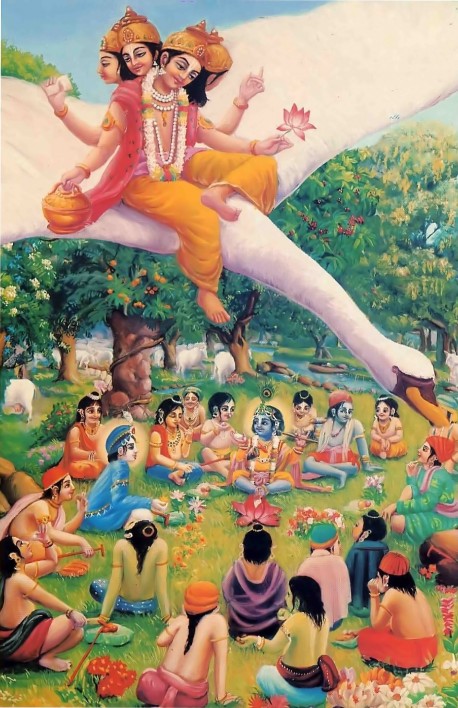 Was Krishna actually the Supreme Personality? Skeptical, Brahma made a plan.

Thus, family relations for the cows and the cowherds remained unchanged, except that the mothers’ affection for the children grew and continued to grow day after day. Clearly, the cows and women of Vrndavana had even greater love for Krishna than for their own offspring. And for many months Krishna maintained Himself as the boys and calves of Vrndavana.

One day, after a full year had elapsed, Krishna and His brother Balarama were in the forest tending some calves. All at once, they noticed that the cows grazing atop Govardhana Hill were looking down upon the boys and calves in the valley. On sighting the calves, the cows started running toward them and leaping down the hill. Practically melting with love for the calves, the cows didn’t care about the roughness of the path down to the pasture. With their milk bags full and their tails raised, they sped toward the calves, pouring milk on the ground as they ran.

The calves in the valley were older than the cows’ own calves—they weren’t expected to drink milk directly from the milk bag, but were ordinarily satisfied with grass. Yet the cows came running down to them anyway. When the cows reached the bottom, they licked the calves’ bodies, and the calves drank the cows’ milk. There appeared to be an extraordinary bond of love.

While the cows had been running down the hill, the men taking care of them had tried to stop them but had failed. Now the men felt baffled, ashamed, and angry. Yet as they came down the hill and into the valley, they saw the boys taking care of the calves and felt overwhelming paternal affection. At once, the fathers’ anger and shame disappeared, and they lovingly lifted the boys up into their arms. After embracing the boys, the fathers went about the business of bringing the cows up the hill. Along the way, they thought of the children, and tears fell from their eyes.

As Balarama gazed upon this remarkable exchange of love between the cows and calves and fathers and boys—when neither calves nor boys needed so much care—He began to wonder how it all had come about. Before long He concluded, “It was arranged by Krishna, and even I couldn’t perceive His mystic power.” In other words, Balarama understood that all the boys and calves were really Lord Krishna’s expansions.

Balarama quizzed Krishna about the incident. “My dear Krishna,” He said, “at first I thought the boys and the calves were great sages or demigods in disguise. But now I think they are actually Your expansions. They are all You! You Yourself are playing as the boys and calves. Please, clear up this mystery for Me. Where have Our friends, the original boys and calves, gone to?”

Now Lord Krishna briefly explained how Brahma had stolen the boys and calves, and how He had concealed the theft so that the families wouldn’t be distressed. While They were talking, Brahma returned to Vrndavana. Only a moment had passed—by his reckoning of time. By human reckoning, a whole year had come and gone. At any rate, Brahma wanted to see the fun caused by his kidnapping. But he was dumbfounded to see that the boys and calves were still playing with Krishna, just as they had been a year earlier! How could this be? He was confident that he’d put them to sleep by his mystic spell. “How is it,” he marveled, “that they appear to be here, playing with Krishna?!”

As Brahma stared at the scene, something even more wonderful happened. To convince Brahma that these weren’t the original boys and calves, Krishna transformed His expansions into four-armed Visnu forms. Besides a bluish complexion and yellow garments, They all had four hands and held a club, a disk, a lotus flower, and a conchshell. On Their heads They wore golden, jeweled helmets that glittered. Pearls, earrings, armlets, and flower garlands also bedecked Their beautiful bodies, and there were golden bells around Their waists and legs, splendid rings on Their fingers, and strings of gems around Their smooth necks. This display of divine potency left Brahma utterly confounded.

At that time Krishna took compassion upon the demigod. He saw that Brahma’s mind was reeling, so He decided to change things back to the way they’d been before He had expanded Himself as calves and cowherd boys.

Relieved from his confusion, Brahma felt that he was waking up from a state near death. Before him he saw Lord Krishna playing the part of a small cowherd boy—holding a lump of fruit salad in His left hand and searching for His lost calves and friends, just as He’d been doing a year earlier.

With great devotion, Brahma bowed down on the ground before the Lord, his four helmets touching Krishna’s lotus feet. Joyfully, Brahma washed Lord Krishna’s feet with his tears. He repeatedly fell and rose, praying to Krishna and recalling His wonderful activities. Having emptied his heart, Brahma stood up, smeared his hands over his eyes, and with the Lord’s permission returned to his abode. He was convinced, at last, of Krishna’s identity as the Supreme Personality of Godhead. 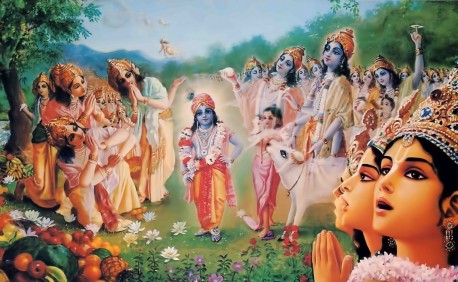 Krishna took compassion on Brahma, whose mind was reeling: He would change things back to the way they’d been before.

Krishna had left His cowherd boyfriends eating lunch on the bank of the Yamuna—a year before. Then Brahma had put the boys to sleep and had hidden them away, but the boys knew nothing of that. Now Krishna brought them back, woke them up, and walked onto the picnic site as if nothing had happened. It was a whole year later, but the cowherd boys thought He’d returned after being away for just a moment. They laughed: Krishna could never leave them for any longer than a little while. Overjoyed, they greeted Him. “Dear Krishna, You’ve returned so quickly! Please, come and join us. Let’s eat together.” Krishna smiled and accepted their invitation. Once again He enjoyed the lunchtime company of His friends, the cowherd boys.

Adapted from Krishna, the Supreme Personality of Godhead, by His Divine Grace A.C. Bhaktivedanta Swami Prabhupada.