She Returns to Fiance for Gala Wedding 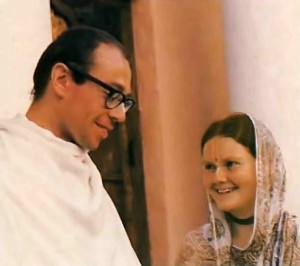 Los Angeles—On November 7, more than one thousand guests attended the wedding of Madonna Slavin and Edward Watford, at the Sri Sri Radha-Krishna Temple. Madonna and Ed are known to friends by their Sanskrit names, Kulapriya and Srikanta. After the wedding ceremony they were the guests of honor at a reception and dinner. “I last saw such a beautiful wedding at the Raj Bhavan in Bombay, thirty years ago,” said Mr. Kantilal Khetani, president of a large Indian cultural society.

Only a few short weeks before their marriage, the mood had been different. Professional “deprogrammers” hired by the parents of the bride-to-be had forcibly abducted her. For five days the “deprogrammers” mistreated her and shifted her to different locations on the California coast. The kidnappers threatened her with physical torture, confiscated her sacred prayer beads, and derided the Bhagavad-gita. On the sixth day Kulapriya escaped, and police flew her back to Los Angeles. She asked her parents to apologize and sign a statement that they would not again have her abducted; they refused. Still, she invited them to her wedding. “I want to continue our relationship,” she said, “but they must respect my right to live by the religion of my choice.”

English Professor Praises Bhagavad-gita As It Is

Dr. Ann Stanford, Professor of English at the Northridge campus of California State University, recently made this learned assessment of Srila Prabhupada’s Bhagavad-gita: “Bhagavad-gita As It Is is an excellent translation of this important religious work. Swami Prabhupada renders the words of the master creator of the Gita as only a person intimately familiar with the culture and language of ancient India as well as the full religious purport of its message can. Being myself a translator of the Gita, I know he has been faithful to the tremendous task of bringing this work fully into the present.”

At the annual joint meetings of the American Academy of Religion, the Society of Biblical Literature, and the American School of Oriental Research, some two hundred scholars signed a petition supporting religious freedom for the members of the International Society for Krishna Consciousness.

The St. Louis meeting of religion professors, theologians, archeologists, and graduate students took action on an appeal from a group of devotees and professors who felt that “deprogrammers” were threatening religious freedom.

The issue is a significant one on today’s religious scene, with small parents’ organizations claiming that American youth are being “psychologically kidnapped” by religious groups. The parents advocate and practice forcible abductions and “deprogrammings” of individuals who have chosen religions different from their own.

The Krishna conscious devotees hold that their religious practices have been part of the mainstream of Indian culture for thousands of years. In support of the movement, scores of Indian government and business leaders have sent letters to U.S. government authorities in New Delhi and Washington.

“We would attest to the fact that this is a bona fide Hindu religion,” Professor J. Frank Kenney of the University of Arkansas said at the St. Louis meeting. Then he delivered a paper on His Divine Grace A.C. Bhaktivedanta Swami Prabhupada, the founder of the Krishna consciousness movement.

A concluding note of support came from Professor Shaligram Shukla of Georgetown University. “I am one who has practiced the same precepts of the Hindu faith, and therefore the activities of His Divine Grace A.C. Bhaktivedanta Swami Prabhupada are most dear to me. We people of India are most grateful to the Krishna conscious society; we frequent their temples regularly… Their methods of worship are the same as are used in India… To call them by unkind names is to insult the most precious tradition of the ancient Indian culture. This is my personal feeling and that of my whole family as well as millions of individual Indians.”