The Krishna-Balarama Temple — Heaven on Earth 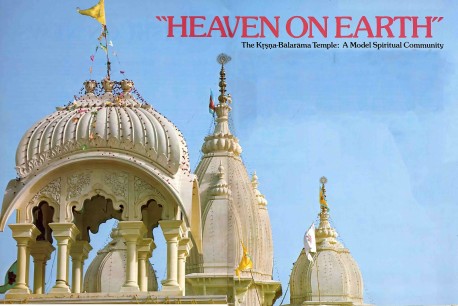 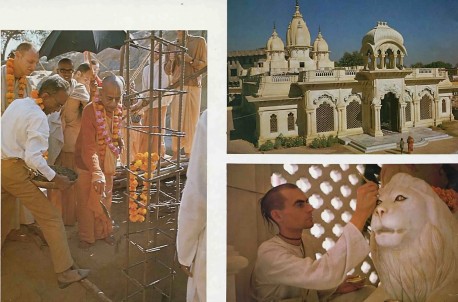 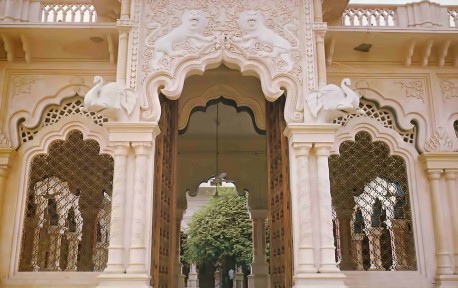 Open door reveals auspicious tamal tree, one of five in Vrindavan, around which temple is built.

Damodara dasa: Why has the International Society for Krishna Consciousness spent so much time and effort constructing such a large temple in a small Indian village like Vrndavana?

Dhananjaya dasa: The first reason is that we want to attract people from all over the world to visit the holy land of Lord Krsna’s birth—and to provide nice facilities for them when they come. Vrndavana is a land of great spiritual potency. In fact, it’s said in the Srimad-Bhagavatam that anyone who visits Vrndavana, even if he’s sinful, will at once contact a spiritual atmosphere and automatically chant the holy names of the Lord. Of course it may appear to an outsider that for us to build a big temple in a small village is a waste of energy. But the Krsna-Balarama Temple in Vrndavana is not only a place to worship God. It is the hub of a long-range social reform project. Vrndavana is the center of religion in India—the birthplace of Krsna, the Supreme Personality of Godhead. Starting from this point, we want to re-institute a culture based on God consciousness, strictly according to the design of the Vedic literature. We plan to make it a success in every way—economically, agriculturally, socially.

When Vedic culture flourished in India the temple was the center of life—the center of all community activities. The temple’s school educated the children; its religious services provided inspiration and purpose; and the temple priests counseled the townspeople on family and economic problems as well as their spiritual life. On the whole, the temple provided a common focus of life that gave solidarity to the community and fostered friendship and purposefulness. Constructing the Krsna-Balarama Temple is a very practical first step in reinstating that strength into Indian culture. The temple can provide the material and spiritual necessities of life when the rest of society is failing.

Damodara dasa: But why should Westerners like yourself and so many others in ISKCON feel they have the right or the responsibility to educate Indians in their own culture?

Dhananjaya dasa: True, for centuries Westerners have come to India to teach that economic development is the path to success. But we’re teaching Indians a different lesson—that materialism isn’t what human life is all about, and therefore that industrialization isn’t the answer to their problems. Only Westerners can teach this lesson to India because only Westerners have experienced the emptiness and frustrations of gross materialism. The present generation of Indians hasn’t been through this yet so they’re easily led to believe that large-scale industry will solve all their problems.

But before the present era, before the English and the Moguls occupied the subcontinent, the people of India understood that a social structure without God at the center is doomed to failure. Now, by and large, they’ve forgotten this. In the villages, the people are still religious, but their practice rarely goes beyond ritualism. They have little knowledge of the philosophy and scriptural basis of their own Vedic culture.

Our spiritual master, Srila Prabhupada, is very concerned about India’s condition. He’s a rare soul who is fully conversant with the Vedic basis of Indian society. Taking direction and inspiration from his guru, Srila Bhaktisiddhanta Sarasvati Thakura, he sees that if India is to prosper once again, it must reawaken its own unique spiritual heritage, which once made India the most opulent country on earth. In fact, the Vedas say that India was once the capital of the whole planet.

Since the past greatness of India was due to its spiritual strength, to try to rebuild India on a materialistic, Western model is foolish. The solution is rather to reconstruct Indian society on the basis of the ancient Vedic tradition. This tradition is much more than just a collection of rites and customs; it’s a living, integrated, scientific philosophy and life-style that can solve India’s problems if applied as it was meant to be applied. The Krsna-Balarama Temple is going to be a center for Vedic studies where people can learn the original solutions to all spiritual and material problems, practically apply them, and then teach them to others.

Damodara dasa: Besides the long-range plans for Indian society, what has the Krsna-Balarama Temple done concretely for the Vrndavana community?

Dhananjaya dasa: Right now we’re distributing food to hundreds of people daily. Fresh, sweet water—hard to come by in the area—is available for everyone. At the well, residents and pilgrims can drink and use the water for bathing. We have many tubs for poor people to wash in. And on the roadside, our trough provides fresh water for oxen, buffalo, and cows.

But we provide more than handouts: we employ people. In building the temple, we employed hundreds of local men. We kept alive traditional crafts by giving work to sculptors, woodworkers, and many other craftsmen living in Vrndavana. Now, to continue their work, we’re developing cottage industries to supply the temple.

In addition, construction has begun on the temple school. We’re filling up an acre of land next to the main plot, and planning to start off with facilities for 250 students. It will be the only school in Vrndavana where both Hindi and English are taught. Both Indian and Western children will learn there, and teachers will be drawn from both ISKCON’s worldwide staff and the local residents. We plan to affiliate the school with Agra University. Another benefit for the neighborhood will be the branch offices of the post office and the Punjab National Bank that will occupy two of the storefronts on the roadside concourse of the school’s land.

Also in the works is a dairy farm about three miles from the temple. It has about 500 acres of pastureland and 150 acres for growing wheat, vegetables, and other crops. The present owners of the farm want us to manage it for them. They’ve seen how well we’re doing with our farms in other countries, and more important, they have faith that we can maintain a devotional atmosphere at the farm, which will give the workers there a fulfilling life centered around service to God.