by His Holiness Acyutananda Swami 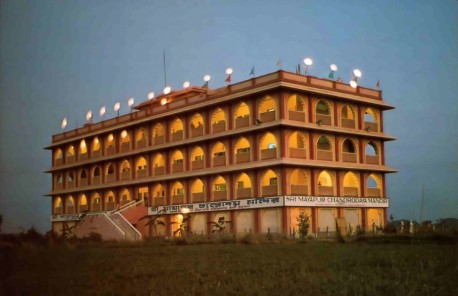 Like a jewel on the Ganges plain, the first building of a future city, ISKCON’s world headquarters in Mayapur, India, rises above the fertile fields of Lord Caitanya’s homeland. 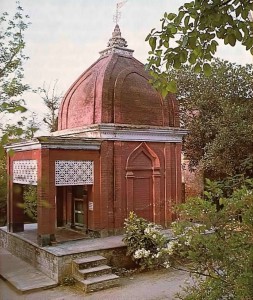 Classic red sandstone tomb of Srila Bhaktivinoda Thakura rests peacefully amidst the palms on the banks of the Jalangi.

In 1886, when Srila Bhaktivinoda Thakura was stationed in Jagannatha Puri, India, as a government minister, he became so anxious to see the land of Lord Caitanya that he applied many times for a transfer to any town nearby. Upon not receiving the desired transfer, he formally submitted a resignation from public service, but it was refused. Then, to his great rejoicing, he obtained a transfer to Krishna-nagara, twenty-five miles from Navadvipa, Mayapur, the birthplace of the Lord. Once stationed there, he did not let a single free moment pass without visiting the land of Navadvipa. He made inquiries about the exact whereabouts of the different places of Lord Caitanya’s pastimes and soon discovered that the then city of Navadvipa was a town of only one hundred years’ standing. Convinced that Navadvipa was not the actual birthplace of Lord Caitanya, Srila Bhaktivinoda became curious to locate the authentic spot. He at once commenced a vigorous inquiry to find the truth of the matter. Finally, after persistent inquiry, he was told that the actual site was lost under the shifting course of the Ganges. Not satisfied with even this explanation, he himself set out to discover the yoga-pitha (birthplace). After great difficulties, he came to know of a place then in the possession of the Mohammedans that was being adored by many realized souls as the true birthplace of Sri Caitanya Mahaprabhu. Local inquiry and corroborative evidence from ancient maps of the latter part of the eighteenth century that showed the name “Sri Mayapur” at last helped him discover the actual site. As a final proof, Srila Bhaktivinoda showed the site to Jagannatha dasa Babaji, the foremost devotee of Lord Caitanya at that time, who confirmed that it was definitely the site where the Lord had appeared. Although Jagannatha dasa Babaji was old and disabled, when he was brought to that holy place and found it genuine, he immediately jumped up and began to dance in ecstasy. 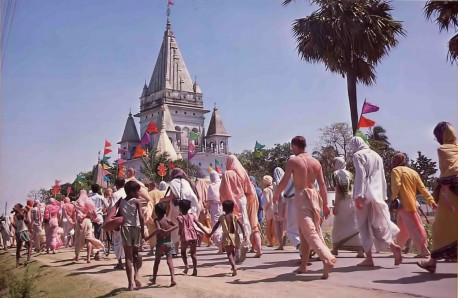 Nearing the spires and five-tiered tower at the birthplace of Lord Caitanya, worldwide delegates of ISKCON make their annual springtime pilgrimage. 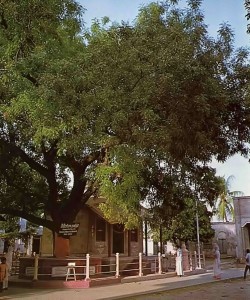 Ancient nim tree under which Lord Caitanya took His birth gave Him His youthful nickname of “Nimai.”

Soon afterward, Srila Bhaktivinoda retired from his government position and personally went door-to-door in Calcutta to raise funds for the construction of a temple memorializing Lord Caitanya’s birthplace. Today, pilgrims from every part of the world congregate there to pay their respects to the Lord and His pure devotees.