Back to Godhead > ~Featured~ > The Desire of a Pure Devotee

The Desire of a Pure Devotee

An excerpt from “Prayers of King Kulasekhara”

O my Lord Mukunda! I bow my head down before Your Lordship’s lotus feet and respect fully ask for the fulfillment of my only desire. Throughout my repeated births may I never forget but always remember You by Your Lordship’s mercy. 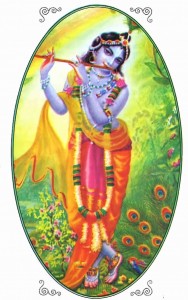 PURPORT: Despite all difficulties, a pure devotee has nothing to ask from the Lord. The world in which we live is a miserable place. It is, so to speak, a prisonhouse for the ever joyful spirit soul. A prisoner cannot move or enjoy life freely, and similarly the living entities who have been conditioned by the laws of material nature are doomed. Indeed, they are bound by the four principal miseries-namely birth, death, old age and disease. These miseries are imposed upon the living entities by the laws of external nature (maya). Maya punishes the forgetful living entities who are busy making plans for lasting happiness despite all material distresses. By the mercy of the Lord, the pure devotee knows this very well. Philosophy means understanding this truth, and advanced knowledge means understanding the naked truth of this world and not being deluded by the temporary beauty of this illusory show. Material nature is not at all beautiful; it is like an imitation peacock. We must have the sense to understand that a real peacock is a different thing altogether. Those who are mad after enjoying or capturing the imitation peacock, as well as those who have only a pessimistic view of the imitation peacock and no positive information about the real peacock, are illusioned by the modes of material nature. Those who are after the imitation peacock are called fruitive workers, and those who simply condemn the imitation peacock and are ignorant of the real one are called empiric philosophers. Disgusted by following a mirage, these empiric philosophers seek to merge into a void.

A pure devotee, however, cannot be classified among such bewildered people. He does not aspire to enjoy the imitation peacock, nor does he condemn it out of disgust like the baffled empiricist. Rather, he seeks the reality. He is superior to all the servants of material nature because he prefers to serve the Lord, the master of all. He seeks the substance and does not want to give it up. The lotus feet of Mukunda (Sri Krishna, the giver of liberation) are the substance, and being a most intelligent devotee, King Kulasekhara prays to obtain this substance without a shadow. A devotee of Narayana (Krishna) is not at all afraid of any circumstance that may befall him. He is neither afraid to visit the kingdom of Pluto nor anxious to enter the kingdom of heaven. For him both these kingdoms are of equal value; they are but castles in the air. He does not aspire to attain either of them, nor does he condemn them. What he ultimately desires is very nicely expressed in the words of King Kulasekhara.

A pure devotee of the Lord like King Kulasekhara does not pray to God for material wealth, followers, beautiful women or imitation peacocks because he knows the real value of such illusory shows, if he is circumstantially placed amidst such illusory things, he does not artificially try to extricate himself or condemn such illusions. For instance, Raghunatha dasa Gosvami, a great associate of Lord Caitanya and a rich man’s son with a beautiful wife and other paraphernalia, met Lord Caitanya Mahaprabhu at Panihati, a village about forty miles from Calcutta. He asked the Lord’s permission to accompany Him and leave his material connections. The Lord refused this proposal and instructed Srila Raghunatha dasa that it is useless to leave worldly connections out of sentiment or out of artificial renunciation. Rather, one should have a complete knowledge of the physical world, and, while behaving outwardly as a worldly man, he must inwardly cultivate his faith in spiritual life. This will help one progress in spiritual life. No one can cross a large ocean by jumping. What was possible for Hanuman by the grace of Rama is not possible for everyone. * [*As related in the epic Ramayana. Hanuman leaped across the Indian Ocean to reach Lanka from India on a mission for Lord Rama, an incarnation of the Personality of Godhead.] To cross the ocean, one must wait and see by what means one can gradually reach the other side.

Although a pure devotee does not bother himself with what is going to happen next in the material world, he is nonetheless constantly alert, and he does not forget his ultimate aim. Therefore King Kulasekhara prays to remember the lotus feet of the Lord. Forgetting one’s relationship with the Lord and thus remaining in the ocean of material hankering is most abominable. In the lower animal species, the living entity completely forgets his relationship with the Lord, and consequently he is constantly busy eating, sleeping, fearing and attempting to gratify his senses. Such a life of forgetfulness is the aim of modern civilization, which seeks to attain such an animalistic life by improved economics. There is regular and specific propagandizing by agents of the external energy to root out the very seed of divine consciousness. This is an impossible attempt, because the divine consciousness of a living being cannot be killed, although it may be temporarily choked by circumstances.

The words bhave bhave, meaning “throughout repeated births,” are very significant here. A pure devotee is never afraid of repeated birth. This is not true of the jnani (mental speculator) who aspires to merge into the Absolute and thereby stop the process of repeated birth. In Bhagavad-gita it is stated that the birth and deeds of the Personality of Godhead are divya, or transcendental. In Bhagavad-gita the Lord tells Arjuna: “Many, many births both you and I have passed. I can remember all of them, but you cannot, O subduer of the enemy!” (Bg. 4.5) For the Lord there is no history of past, present and future, but for the living being there is such a history due to his forgetfulness of the past. However, a living entity who is a constant companion of the Lord is also transcendentally situated. His birth and death are one and the same. They are but ephemeral flashes, and they do not in any way affect the spiritual existence of a devotee.

To cite a crude example, a cat captures both her offspring and her prey, the rat, in her mouth. In the eyes of the layman, both capturing processes may appear the same, but in fact there is a vast difference. While being carried in the cat’s mouth, the rat and the cat’s offspring see things differently. For the rat, his capture is death, whereas for the offspring, it is but a pleasurable touch. The passing away of a devotee from the active scene of material existence may appear to be death, but it is different from the death of an ordinary man. The death of an ordinary being grows from his good and evil deeds, and his next birth is awarded according to his past deeds. It is different for a devotee, however. Even if a devotee fails, he is guaranteed birth in a good family-that of a learned and devoted brahmana or of a rich mercantile vaisya. Thus the devotee who fails in his spiritual attempts has a better chance to improve his spiritual condition and devotional service by taking birth in a well-to-do family. Unfortunately in this iron age the members of well-to-do families misuse their prosperity in various ways and instead of improving their spiritual life simply degrade themselves by bad association. King Kulasekhara therefore prays not to forget the lotus feet of the Lord throughout his repeated births.

A devotee who has attained perfect success in devotional service returns to Godhead without a doubt. For him there is no question of repeated birth and death. But if a devotee does not attain complete perfection, he is guaranteed birth in a learned and well-to-do family, and even if he is not given birth in a good family, he is blessed by being able to remember the lotus feet of the Lord. Such a benediction is greater than any number of material assets. Constant remembrance of the Lord’s name, fame and qualities automatically counteracts the reactions of all vices and extends the blessings of goodness. Constantly remembering the lotus feet of the Lord is the same as rendering active service to the Lord.

Therefore a pure devotee does not ask the Lord for material wealth, manpower, followers or beautiful women. Rather, he simply prays for unalloyed faith in the Lord’s service. This should be the prayer and life motto of all prospective students in devotional service.

One Response to The Desire of a Pure Devotee