THE DEVOTEES of the International Society for Krishna Consciousness are preparing for a number of important upcoming festivals that are celebrated every year. These festivals are great transcendental opportunities because they afford one the chance to hear about, chant about and remember Krishna, in the association of pure devotees of Krishna. 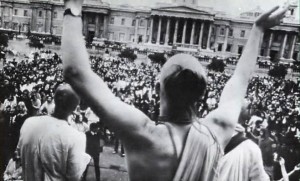 The Krishna conscious devotees invite everyone to join in the bliss of these celebrations. For further details, please write or call the ISKCON center nearest you.

THE FIRST CELEBRATION is Rathayatra, which occurs this year on June 21. (Krishna conscious festivals occur on a different day every year, according to our Western solar calendar, because their appearance is calculated by the Vedic calendar, which is lunar.) The Rathayatra festival, which has been observed in India’s holy city of Jagannatha Puri for thousands of years, glorifies Lord Krishna in His form as Lord Jagannatha, which means “the Lord of the universe.” 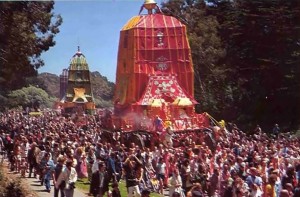 Because the Deity is omnipotent, He can appear in fully spiritual incarnations apparently made of wood. Lord Jagannatha is such an incarnation of the Lord. On the Rathayatra day, the devotees bring the Jagannatha Deity on a parade of many miles in a huge cart. Chanting and dancing jubilantly, the thousands of people who gather for the festival pull the cart through the streets with long ropes. The celebration concludes with a sumptuous feast of Krishna-prasada, food first offered to Lord Jagannatha. In London and in San Francisco, the first city in the West where the Rathayatra Festival was held, thousands of people participate in celebrating Rathayatra. 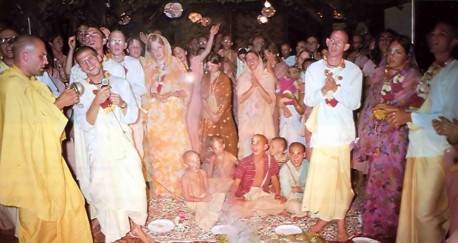 THE NEXT FESTIVAL, Janmastami, marks the Appearance Day of Lord Krishna. This is what we might naturally call His “birthday” except that Krishna does not take birth like an ordinary human being. His so-called birth is a transcendental pastime He performs through His mystic potency. In the Bhavisya Purana it is said, “My Lord Krishna, please let us know the date when Your mother, Devaki-devi, gave birth to You. If You kindly inform us about this, we shall observe a great celebration on this date. We are souls one hundred percent surrendered unto Your lotus feet, and we wish only to please You with our ceremonies.” Krishna conscious devotees, therefore, hold great celebrations on the Appearance Day of Lord Krishna, especially in Vrndavana, India, where the Lord appeared on earth, and in New Vrndavana, a Krishna conscious community in the hills of West Vriginia that is a transcendental replica of Krishna’s original abode. This year, Janmastami occurs on the 11th of August. 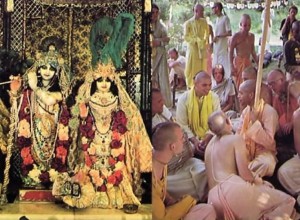 THE NEXT FESTIVAL, Vyasa-puja, celebrates the Appearance Day of the spiritual master. According to all the revealed Vedic scriptures, one should honor the spiritual master as much as one honors the Supreme Lord because he is a confidential representative of the Lord. The Appearance Day of our spiritual master, His Divine Grace A.C. Bhaktivedanta Swami Prabhupada, is the day after Janmastami. Thus the devotees observe Janmastami, as Vedic scriptures enjoin, by fasting all day and hearing and chanting Lord Krishna’s glories; then on the next day, Vyasa-puja, the devotees glorify the spiritual master by offering prayers, flowers and ceremonies in his honor, and then an opulent feast. Since the service of the spiritual master is the life and soul of a sincere disciple, all the members of the Krishna consciousness movement observe Vyasa-puja with great devotion. In New Vrndavana, almost one thousand people gather annually for celebrations of Janmastami and Vyasa-puja that extend for an entire week. The many advanced devotees who attend give special discourses about bhakti-yoga, and, except on Janmastami, there is opulent feasting daily throughout the week of the festival.

FINALLY, Radhastami, the Appearance Day of Srimati Radharani, takes place after the Appearance Day of Lord Krishna, on September 23. Radharani is Krishna’s pleasure potency, and She appears as His eternal consort. She is the symbol of devotional service in the highest degree. Because Krishna is the Supreme Personality of Godhead, it is very difficult to approach Him. But devotees take advantage of His compassionate nature, represented by Radharani, by always praying to Radharani for Krishna’s compassion. Again, devotees celebrate this festival by chanting and feasting in great ecstasy.