Srila Prabhupada Speaks Out on Science and Belief

On “Science” and “Belief”

The following conversation between His Divine Grace A.C. Bhaktivedanta Swami Prabhupada and some of his disciples took place in March 1974 on an early-morning walk in Perth, Australia.

Devotee: [Taking the part of a materialistic scientist] Why do you call Krishna consciousness a science? It seems like it’s only a belief. 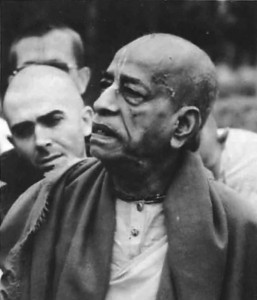 Srila Prabhupada: Your so-called science is also belief. If you call your way science, then our way is also science.

Devotee: But with our science we can prove our beliefs.

Srila Prabhupada: Then prove that chemicals make life. Your belief is that life is made from chemicals. So prove it; then it is science. But you cannot prove it; therefore it remains a belief.

Devotee: Well, you believe in the soul, but you can’t prove that it exists. Since we cannot see the soul, we have to conclude that life comes from matter.

Srila Prabhupada: You cannot see the soul with your gross senses, but it can be perceived. Consciousness can be perceived, and consciousness is the symptom of the soul. But if, as you say, life comes from matter, then you must demonstrate it by supplying the missing chemicals to make a dead body live again. This is my challenge.

Devotee: We will require some time to find the right chemicals.

Srila Prabhupada: That is nonsense. Your belief is that life comes from chemicals, but you cannot prove it. Therefore you prove yourself to be a rascal.

Devotee: But you accept the Bhagavad-gita on faith. How is that scientific? It’s only your belief, isn’t that correct?

Srila Prabhupada: Why isn’t the Bhagavad-gita scientific? The Bhagavad-gita says, annad bhavanti bhutani parjanyad anna-sambhavah: “All living entities subsist by eating food grains, and grains are produced from rain.” Is that belief?

Devotee: That must be true.

Srila Prabhupada: Similarly, everything in the Bhagavad-gita is true. If you think carefully about what Krishna says in the Bhagavad-gita, you will find that it is all true. For example, Krishna says that in society there must be an intelligent class of men, the brahmanas, who know the soul and God. They are civilized men. But where is such a class of men in today’s society?

Devotee: Throughout the world there are many priests, ministers, and rabbis.

Suppose a man does not know about the government of his country. What kind of man is he? He is simply a third-class man, a rascal. A civilized man knows about his country’s government. Similarly, there is a government of the whole universe, but it” you do not know it you are a third-class, uncivilized man. That is why Krishna teaches in the Bhagavad-gita that there must be an intelligent class of men who know God and who understand the whole universal management—how it is running under the order of God. Krishna devotees know these things. Therefore they are the real brahmanas and the real scientists.

Devotee: But the Bhagavad-gita is five thousand years old, so it doesn’t pertain to our modern world.

Srila Prabhupada: Then where do you find in the Bhagavad-gita that it is five thousand years old? Krishna says, imam vivasvate yogam proktavan aham avyayam:

“I spoke this imperishable science of Bhagavad-gita to Vivasvan more than 120 million years ago.” You do not know this? What kind of reader of the Bhagavad-gita are you? The Bhagavad-gita is avyayam, eternal. So how can you say it is five thousand years old?

[Pointing to the rising sun with his cane] Here we see the sun just rising. But it is always there, in space. The Bhagavad-gita is like that: it is eternal truth. When the sun rises we don’t say, “Oh, the sun is just now coming into existence.” It is always there, but we can’t see it until it rises. Men used to think that at night the sun died and in the morning a new sun was created. They also used to believe the earth was flat. This is your scientific knowledge: every day a new opinion.

Devotee: This means that we are discovering the truth.

Srila Prabhupada: No. It means you do not know what the truth is. You are only speculating. Now you accept something as true, but after a few days you say it is not true. And you call this science!

Devotee: Yes, you’re right. Many of the scientific textbooks that were written just a few years ago are outdated now.

Srila Prabhupada: And the scientific books you are now using will be useless in a few years. This is your science.

Devotee: But at least what we know now is more true than what we knew before, and if we keep trying we will know more.

Srila Prabhupada: This means you are always in ignorance. But the Bhagavad-gita is not like that. Krishna says to Arjuna, “I first instructed this science 120 million years ago, and today I am teaching you the same thing.” That is scientific knowledge: the truth is always the same. But you scientists are always changing—”discovering the truth,” you call it. That means you do not know what the truth is.

Devotee: [As himself] The problem is, everyone is a cheater. Everyone is speculating and presenting his own knowledge as the truth.

Srila Prabhupada: Yes. Therefore we accept Krishna, who does not cheat. And since I am presenting only what Krishna has said, I am also not a cheater. That is the difference between the scientists and us.