This Material World Is Zero — Srila Prabhupada Speaks Out

“This Material World Is Zero” 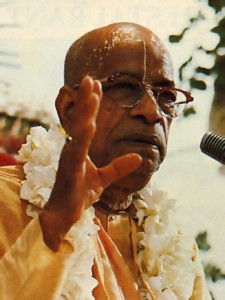 This exchange between His Divine Grace A.C. Bhaktivedanta Swami Prabhupada and a graduate student took place in Los Angeles, near the shore of the Pacific Ocean, during January of 1974.

Student: Today’s scientists and philosophers and psychologists—they say the only authority they can accept is their own mind.

Srila Prabhupada: In Sanskrit they are called mano-dharmi—mental speculators.

Student: But don’t we have to experiment with different mental perspectives if we’re going to understand the world?

Srila Prabhupada: Actually, mental speculators have been condemned—Mano-rathenasati dhavato bahih [Srimad-Bhagavatam 5.18.12]—because they are simply carried away by the chariot of the mind. The mind is flickering, always changing. Sankalpa-vikalpa: the mind’s business is to accept something and again reject it. All these mental speculators are doing just that. Somebody’s putting forward some theory, and after a few years he will himself reject it, or somebody else will reject it. So by mental speculation you will remain on the material, changing platform. You cannot get any lasting idea.

Student: But the scientists feel strongly about their research. They’re convinced they’ve done some real good for the world.

Student: How can you say that “bad” and “good” are the same thing?

Srila Prabhupada: Here is another example. In India the villagers pass stool out in the open fields. By the end of the day, the sun has left the top part of the stool dry. So when some fool sees the dry part of the stool, he may say, “Oh, this part is very nice.” He forgets that after all, it is stool-so what is the difference whether it is dry or moist? In the same way, the scientists are making great advancement, but death is still there. So we have to ask, “What is the difference whether you make advancement or no advancement? One who has not advanced in science will die, and you so-called advanced people will also die. Then what is the use?” Neither the scientist nor the ordinary person can protect himself from death. Then what is the meaning of “good”-“This is good,” “This is advancement”—or “This is not advancement”?

Student: But I think the distinction between “good” and “bad” depends on the consciousness of the individual.

Srila Prabhupada: “Relativity”—the “law of relativity”: “One man’s food is another man’s poison.” So how can you distinguish whether this is “food” or “poison”? One man will say, “No, it is food!” Another man will say, “It is poison!” So how will you distinguish? You see? This “good” and “bad” is simply mental speculation. Because it is on the material platform, there is nothing good. All that the scientists and philosophers are doing is cheating. They say, “We are advancing.” In what way are you advancing? The problem of birth and death is still there—so what is the meaning of your advancement?

Student: So we have to get off the chariot of the mind?

Srila Prabhupada: Yes. If you remain on the chariot of the mind, then whatever you accept you’ll have to reject again. And that is just what they are doing. The so-called scientists and philosophers—they are putting forward some theory, and after some time they reject it. So if you remain on the mental platform, then this business of accepting and rejecting will go on. You’ll never come to a lasting conclusion. One has to rise to the spiritual platform. That is nityah sasvato ‘yam—eternal, everlasting.

Student: Are you saying everything in this world is worthless?

Srila Prabhupada: Just try to understand. It can have value and meaning. For instance, you can add thousands of 0’s together, one after another, but the value will still be 0. It will never become 1. But by the side of 0, if you bring 1, immediately that becomes 1o. Add another 0, immediately you have 100. You have increased it ten times. But that 1 must be there—that is ekam brahma, the one Supreme Spirit. Then 0 increases in its value. Similarly, this material world is zero. Bad. But if there is Krsna consciousness, then it has value. Then it has value.

Student: Doesn’t the chariot of the mind have any value at all?

Srila Prabhupada: No. It has no value.

Student: But the whole Western philosophical—

Srila Prabhupada: Mano-rathenasati dhavato bahih: by mental speculation you’ll remain in this temporary field. Asat means “that which does not exist.” You take anything in this material world-some day it will not exist. Anyone knows it. A skyscraper is constructed, but everyone knows that it will not exist; some day it will fall down. Everyone knows. It will not endure. Therefore Prahlada Maharaja says, maya-sukhaya bharam udvahato vimudhan: for illusory happiness people are making huge, gorgeous arrangements and working day and night. For something that will be zero. It has begun as zero, and it will end as zero; in the middle they’re busy. Just see’. Therefore they’re vimudhan—fools and rascals.