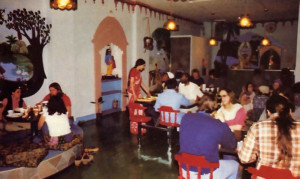 “A launch pad for positive inner action in the presence of previous negativism.”

Cleveland—The City Council recently passed a resolution congratulating ISKCON for opening a budget vegetarian restaurant in the heart of a deprived section of the inner city.

The resolution affirmed that Govinda’s Restaurant, where patrons receive all the nourishing vegetarian food they can eat for 99c, is ‘a benefit for the poor, for the elderly, men and women, black and white.”

Lonnie L. Burten, Councilman for the 12th Ward, where the restaurant is located, said he was happy to see the Hare Krsna members helping to restore vitality to a dying area of the city. The City Council’s resolution characterized Govinda’s as “a launch pad for positive inner action in the presence of previous negativism.”

But food is only part of the attraction at Govinda’s. Patrons frequently discuss topics such as karma, reincarnation, and mantra meditation with their hosts.

Recently Dr. H. D. Sankalia, one of India’s leading archaeologists, had this to say about His Divine Grace A.C. Bhaktivedanta Swami Prabhupada’s English translation of Srimad-Bhagavatam:

“People all over the world, particularly in the West, show increasing dissatisfaction with their lives in spite of increasing and unimaginable material comforts, they do not feel happy. They have begun to understand that true happiness comes only from within. How to achieve this inner happiness is best taught by the Srimad-Bhagavatam.

“Hence it has been described, for the last five thousand years at least, as the ripened fruit of Vedantic philosophy. All the early teachings found in the Vedas, the Upanisads, and the Brahma-sutras of Vyasadeva are as dry as dust, whereas the teachings of the Bhagavatam are as sweet as nectar. That is why it has become popular all over India.

“I am indeed glad, in fact overjoyed, to see that this ripe fruit of the wish-fulfilling tree of Vedic knowledge-this essence of all philosophy, which hitherto was available only in Indian languages and Sanskrit-is now rendered into English by His Divine Grace A.C. Bhaktivedanta Swami Prabhupada. This is not merely a simple translation. The original text is printed in beautiful Sanskrit letters and is accompanied by Roman transliteration, synonyms, translation, and elaborate explanation by Srila Prabhupada. Thus for the first time this sweet fruit can be tasted by people all over the world. For this great service to humanity we should ever remain grateful to Srila Prabhupada, the founder-acarya of the Krsna consciousness movement and Lord Krsna’s pure devotee. His encyclopedic and useful Srimad-Bhagavatam should find a place in every home and library.”

BACK TO GODHEAD has moved its principal editorial and production offices from Los Angeles to the fourth floor of the Hare Krishna Building, on West Fifty-fifth Street in New York City.

It was in New York City, in 1966, that His Divine Grace A.C. Bhaktivedanta Swami Prabhupada began publishing BACK TO GODHEAD in the West. He had founded the magazine in India in 1944, and after coming to America he continued the publication with the help of his first American disciples.

The magazine’s offices have moved back to New York so that the staff members may work more closely with the editor-in-chief, His Divine Grace Satsvarupa dasa Goswami, whose work keeps him mostly on the East Coast.

BACK TO GODHEAD’S subscription offices will remain in Los Angeles.