Back to Godhead > Prabhupada > Can We Put a Date on Wisdom? — Srila Prabhupada Speaks Out

Can We Put a Date on Wisdom? — Srila Prabhupada Speaks Out

Can We Put a Date on Wisdom? 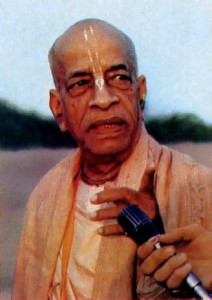 This exchange between His Divine Grace A.C. Bhaktivedanta Swami Prabhupada and a British student took place some seven years ago during an early-morning walk in London.

Guest: Lately I’ve been doing some research on the dating of the Vedas. You know, some archaeologists maintain that the evidence from the Harappa dig and Mohenjo-Daro show the dating of the Vedas in fact to be a great deal later than previously thought. This would seem to deprive the Vedas of a certain amount of authority, because they no longer would appear to be the most ancient religious scriptures in the world.

Guest: I wouldn’t think we could.

Srila Prabhupada: So how can you trace out the history of Vedas? Vedas means knowledge. So first of all find out from which date knowledge began. Then you find out the age of the Vedas.

The history of Veda began from the date of the creation of this material world. No one can give the date of the creation. The creation begins with the birth of Brahma, and you cannot calculate even the length of Brahma’s one day. During Brahma’s night, the universe is devastated to some extent, and during his daytime, creation takes place again. There are two kinds of devastations. One devastation takes place during the night of Brahma, and one final devastation annihilates the entire cosmic manifestation. But these teeny people are speculating about the dates of Vedas. That is ludicrous.

There are many microbes that grow in the evening and die just as the day is beginning. One night is their whole span of life. So our life is like that. What history can you write? Therefore, we receive Vedic knowledge from Vedic authorities.

One should not be a frog philosopher.

Do you know about frog philosophy? Dr. Frog had never seen the Atlantic Ocean, and somebody informed him, “Oh, I have seen such a vast mass of water.”

Guest: Yes, it was beyond his conception.

Srila Prabhupada: Yes. So these scholars are like frogs rotting in their wells. What can they possibly understand of the Vedic knowledge?

Guest: Yes, I see. To change the subject, I wonder whether you feel that the Vedas affirm that the most true form of life, the most pure form of life, is one that’s lived alongside nature, not against nature as we seem to be doing in our urban setting.

Srila Prabhupada: Oh, yes. Real life means you have to minimize your bodily activities so that you can save time and devote yourself to spiritual understanding. That is real life. And the present civilization based on the bodily concept of life is animal life. It is not civilized life.

Athato brahma-jijnasa: civilized life begins when one is so much advanced that he inquires about the spirit soul. But when there is no such inquiry, when people cannot inquire what is spirit soul, they are like cats and dogs.

Vedic life teaches one to become as free as possible from bodily disturbances. Therefore, Vedic education begins with brahmacarya, celibacy. You see? But these rascals cannot check their sex life. Their philosophy is that you should go on with sex life unrestrictedly and when there is pregnancy kill the child.

Srila Prabhupada: That is their rascal philosophy. They have no idea that by training one can forget sex life. And if you forget sex life, where is the question of abortion? But they cannot do that. Therefore it is said, adanta-gobhir visatam tamisram: by unrestricted sense enjoyment they are gradually going down to the level of animal life.

A person who indulges in abortion, killing the baby in the womb, will be put into a womb in his next life, and somebody will kill him. As many babies as he has killed, he’ll have to accept that many lives and be killed. So for hundreds of years it will be impossible for him to see daylight. He’ll remain in the womb and be killed. People don’t know nature’s laws. One cannot violate nature’s laws as one can the state laws. Suppose you kill somebody—you can escape by trick. But you cannot escape nature’s law. As many times as you have killed, that many times you must be killed within the womb. That is nature’s law.

Guest: Only last week I was talking to a nurse who works on an abortion ward in one of the main London hospitals. It’s terrible. Some of the fetuses are in such an advanced state of development that clearly life is a strong possibility.

Srila Prabhupada: There is no question of possibility. Life begins from the very beginning of sex. The living entity is very small. By nature’s law, according to his karma, he’s sent into the father’s semen and injected into the mother’s womb. The sperm and egg cells from the man and woman emulsify and form a body that is just like a pea. Then that pealike form develops gradually. This is all described in the Vedic literature. The first stage is the manifestation of nine holes—for the ears, eyes, nostrils, mouth, genitals, and rectum. Then the senses gradually develop, and by six and a half months everything is complete, and the living entity’s consciousness comes back. Prior to the formation of the body, the living entity remains unconscious, like in anesthesia. Then he dreams, and then gradually comes to consciousness. At that time he becomes very much reluctant to come out, but nature gives him a push, and he comes out. This is the process of birth.

This is Vedic knowledge. In the Vedic literature you’ll find everything perfectly described. Therefore, how can the Vedas be subject to history? But the difficulty is that we are speaking of things that are spiritual. Therefore it is sometimes difficult for the gross materialists to understand. They are so dull-headed that they cannot understand.