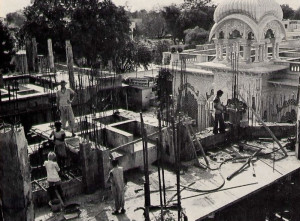 Support beams rise from the newly laid second story of the memorial shrine for Srila Prabhupada in Vrndavana, India. The dome of the Krsna-Balariima temple appears at upper right.

Vrndavana, India—The central spire will reach seventy feet into the sky, white marble elephants, lions, swans, and peacocks will decorate the facade. Curving staircases leading to the gallery of paintings will be balanced on either side by waterfalls, fountains, and canopies of flowers.

Although the opening is still more than a year away, work progresses rapidly on this memorial samadhi (tomb) in honor of the late founder-acarya of the International Society for Krishna Consciousness, His Divine Grace A.C. Bhaktivedanta Swami Prabhupada.

The disciples of Srila Prabhupada are offering the memorial in accordance with Vaisnava tradition. It is customary for Krsna devotees to build such a samadhi in honor of their departed spiritual master, as a sign of their devotion to him. Although devotion is more an internal affair than an outward combination of bricks and mortar, the shrine nonetheless bears great meaning as a sacred place of pilgrimage for remembering the spiritual master and his instructions.

Srila Prabhupada’s samadhi will stand in the front courtyard of the Krsna Balarama Temple he himself established in Vrndavana, the small village of north India where Lord Krsna appeared five thousand years ago. Srila Prabhupada had made Vrndavana his residence before leaving India in 1965 to spread the teachings of Lord Krsna to the West. Here he had translated the first of sixty volumes of Sanskrit scripture. And here, in 1977, he departed, having established more than one hundred temples for Krsna consciousness internationally.

The project was designed by His Holiness Surabhir-abhipalayantam dasa Goswami, an architect among Srila Prabhupada ‘s disciples. It is slated for completion by the fall of 1981. 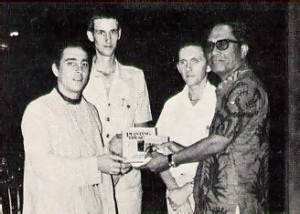 His Holiness Prabhupada-krpa Goswami presents ISKCON publications to the Governor of Bali.

Bali, Indonesia—His Excellency Bapak Ida Bagus Mantra, Governor of the Indonesian island of Bali, recently extended a warm reception to devotees of ISKCON, the International Society for Krishna Consciousness. The people of Bali pride themselves on their ancient civilization, which has roots deep in Hinduism. Materialism and technology have had their impact here, nonetheless, and the Governor was pleased to hear of the devotees’ endeavors to establish the principles of the original Vedic culture. “People here need to be reminded that they are not the body but the soul,” the Governor said.

Gaura-mandala-bhumi dasa, an ISKCON student from Australia, directs a team of devotees in translating the Society’s books into the Indonesian language, a program which the Governor enthusiastically endorsed.