Back to Godhead > Devotees > Chanting > Sankirtana — The Perfection of Glorifying God

Sankirtana — The Perfection of Glorifying God

The Perfection of Glorifying God GARUDA DASA is a Ph.D. candidate at the University of Chicago, in the Department of South Asian Languages and Civilizations. He holds masters degrees in comparative theology from Chicago and Harvard.

Among all the practices of the Hare Krsna movement, the most prominent is the public chanting of God’s names, ecstatic dancing, and playing of musical instruments—a spontaneous street liturgy common in most major cities throughout the world. Yet upon first seeing devotees chanting and dancing on a busy downtown street of a modern Western city, many people understandably experience a kind of culture shock. Perhaps it’s the devotees’ uncommon appearance, or the unfamiliar music, or the mere presence of a group of people celebrating something right on the street. In any case, the spectacle of ecstatic dancing, chanting, and music-making certainly warrants an explanation, and we can begin with some historical background.

One day, in early sixteenth-century India, Sri Krsna Caitanya requested the people of the Bengali town of Navadvipa to chant the Hare Krsna mantra in every one of their homes. Before long, these devotees became so overwhelmed and intoxicated by the chanting of the holy names of God that they burst out of their homes into the streets. One of Sri Caitanya’s biographers says, “No one in Navadvipa could hear any sound other than the words ‘Hare Krsna! Hare Rama!’ and the beating of mrdanga drums and the clashing of hand cymbals.” Accompanied by these musical instruments, Sri Caitanya would chant with such devotional ecstasy that huge crowds of people would gather to chant and dance through the streets of Navadvipa and into the nearby villages.

Thus Sri Caitanya, who is accepted by devotees as an incarnation of Godhead and by historians as one of the greatest devotional mystics in the history of the world’s religions, introduced this most dramatic expression of devotion, known as sankirtana. Although we can trace the idea of sankirtana back thousands of years, not until Sri Caitanya was its full potential realized, for it was He who first demonstrated its universal attraction. For six years He traveled widely in India by foot, and wherever He went He introduced the practice of sankirtana. Thereafter, it was accepted by saints of various religious traditions and sects across the Indian subcontinent. 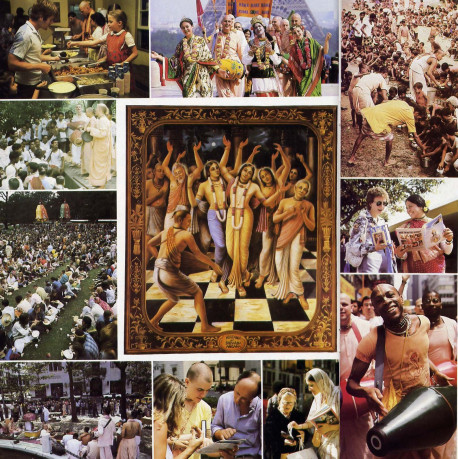 Nearly five centuries later, in 1966, sankirtana was introduced in the West by its foremost modern exponent. His Divine Grace A..C. Bhaktivedanta Swami Prabhupada (the founder and spiritual guide of the International Society for Krishna Consciousness). Since then, its practice has spread throughout the world. It is precisely this ancient practice of sankirtana that the devotees of the Hare Krsna movement are presenting before the world’s plurality of cultures today. Now let us examine more closely the phenomenon of sankirtana.

We can understand what sankirtana is through a brief analysis of the word. The word sankirtana has a twofold meaning, indicated by two distinct translations of its root. The Sanskrit verb kirt, from which the word kirtana derives, means on the one hand “to praise” or “to glorify” and on the other “to tell” or “to call.” Thus the act of kirtana is meant to praise or glorify God while telling or calling man to participate in this glorification. Kirtana always takes place in a congregation of saintly people, as indicated by the prefix sam, meaning “all together,” or “congregationally.” The prefix sam may also act as an intensive, connoting “perfect” or “complete” kirtana. Therefore sankirtana carries the sense that when kirtana is performed congregationally, the glorification of God and the calling of man is perfect or complete.

Sankirtana is the performance of activities that in some way glorify God. There are various forms of sankirtana, such as chanting God’s holy names, offering and accepting sanctified food, and producing and distributing sacred literature. Each of these is a primary way a pure devotee may glorify God.

Glorifying God pleases Him, purifies the glorifier, develops one’s spiritual qualities, and attracts others to this glorification (thus pleasing God even more). How can one please the Supreme Being, upon whom everything is absolutely dependent? We can do this by giving Him the only thing He lacks—our love and devotion to Him. Sankirtana is the most complete and perfect way of giving God man’s devotion.

As chanting God’s name in glorification pleases God, so also do offering food to God and writing and publishing literature about God. When devotees offer food to the Supreme in worship, the food is spiritually transformed, and devotees gladly distribute it to all, for just by tasting such sanctified food one is purified and begins pleasing God. Furthermore, a book that glorifies the Supreme Lord, His name. His form, His qualities, and His manifestations is itself an embodiment of the divinity. Devotees therefore distribute such literature for the spiritual education of others. Sri Caitanya advocated all three of these forms of sankirtana.

The chanting of the holy names of God is a religious principle that genuine prophets and saints of widely varied traditions have tried to promulgate, and therefore it should not be a practice completely foreign to the West. Countless verses in the Old Testament express the importance of the names of God: “So I will sing praise unto Thy name forever,” “Sing praises to His name,” “Blessed be the name of the Lord,” and so on. Many verses even ask us to sing the holy name of God with music and dance: “Let them praise His name in the dance, let them sing praises unto Him with the timbrel and harp.” And sankirtana should absorb one constantly: “From the rising of the sun unto the going down of the same, the Lord’s name is to be praised.” These examples illustrate that God’s name must not be ordinary; otherwise, why should a devotee of God occupy himself constantly with praising it?

There is something special about the relationship between God and His name that we don’t find between ordinary persons or things and their names. We should note that these passages from the Old Testament don’t directly mention God as the one being praised. Rather, it is His name. The praising of God takes place through the praising of His holy names, because they actually represent God in a form that enables one to associate with Him while in limited human life. Because God is the supreme absolute being, He is fully present in any one of His names. Therefore, by sounding God’s names one associates with the transcendent Lord Himself. Sankirtana, then, means to associate with God through the chanting of His sacred names in order to realize our eternal relationship with Him.

Describing the power of God’s names, Lord Caitanya says that God has invested all His transcendental potencies in His names and that chanting these names enables anyone to easily approach Him. Although there are many names of God that one may chant, the especially potent formula given by Sri Caitanya and His followers is the chanting of Hare Krsna, Hare Krsna, Krsna Krsna, Hare Hare/ Hare Rama, Hare Rama, Rama Rama, Hare Hare. This formula is known as the “greatest chant,” or the maha-mantra, because it contains the most powerful names of God for the process of sankirtana. Anyone may benefit from chanting these names, regardless of sex, race, nationality, religious belief, or social status.

One cannot overestimate the potency of sankirtana, for in each of its forms it brings about a permanent spiritual effect. But sankirtana with sacred literature has a special quality. We have mentioned that devotees recognize sacred literature as an embodiment of the divinity, as they recognize the holy names and sanctified food. Such sacred literature is very dear to the devotees because it conveys the message of God and thus invokes His very presence. But although chanting God’s names and partaking of sanctified food have a powerful, permanent effect and these methods have their own special applications, they provide the purifying presence of God only during the time they are performed. The special quality of sacred literature, therefore, is that it provides continuous access to the Deity and association with Him, The Padma Purana says that if one just keeps such literature in one’s home, the Lord resides there. The devotee understands that sacred literature is the greatest gift, so he naturally tries to distribute this gift profusely for everyone’s benefit. *

*Sacred literature plays an essential role in the Vaisnava tradition, from which the sankirtana movement emerges. For example, among the tradition’s many texts is the Mahabharata, the longest epic poem in the world (eight times the length of the lliad and the Odyssey combined). One section of the Mahabharata is the Bhagavad-gita, the most loved sacred text of India. And many thousands of other works belong to this same rich literary heritage.

The distribution of sacred literature is not a new form of sankirtana. It was highly regarded even during Lord Caitanya’s time, when literature was not mass-produced. Lord Caitanya ordered His immediate disciples the Six Gosvamis of Vrndavana to write copious works on the spiritual science. And later, as printing technology developed, the importance of literary sankirtana increased. In the early twentieth century one great Vaisnava teacher called the distribution of sacred literature the “great drum,” or brhat mrdanga; the sound of a drum may be heard for half a mile, but books can be heard around the world.

The process of sankirtana is so complete and powerful that while it glorifies God through its various forms, it spiritually uplifts all who participate or have even remote contact with it. Thus, as Lord Caitanya states, it is “the prime benediction for humanity at large.” It is the direct and genuine experience of the soul proper. It is the outpouring of the most natural tendency of the human heart in its lasting relation with the Supreme Being. It is that for which man ultimately hankers in his higher self, after realizing the futility of trying to satisfy worldly appetites and passions. Sankirtana “enables us to fully taste the nectar for which we are always anxious.”

As demonstrated by the Hare Krsna movement, the worldwide spread of this powerful religious force can spiritually transform people from all cultures. This fact, along with evidence about sankirtana from other scriptural texts, points to the universality of sankirtana: sankirtana brings forth the ultimate religious dimension of human existence. Because sankirtana so thoroughly arouses man’s spiritual potential in his relation to the Supreme Person, it brings forth love of God par excellence. Indeed, in our materialistic society, which pushes us toward utter forgetfulness of God, sankirtana powerfully reasserts the genuine spiritual character of man.