Italy’s leading producer of fine furniture heads up a devotional community in Florence. 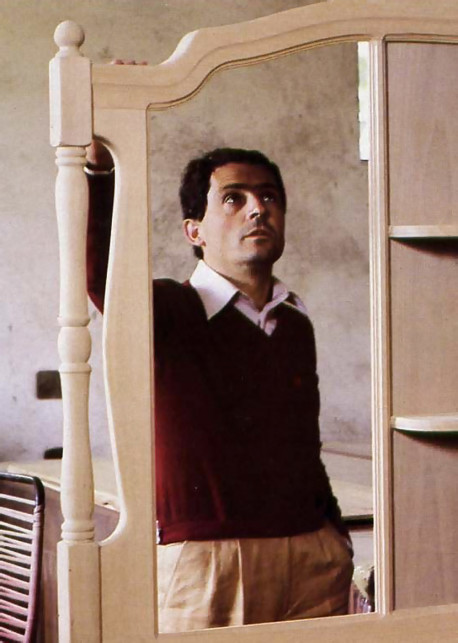 Hey, Marco! How’s your father?” an old woman calls out, seeing him pass by in his Mercedes. Marco Ferrini waves and laughs jovially. He is the local boy who made good, Ponsacco’s favorite son, and Italy’s largest furniture designer and manufacturer. With more than eighty lines of furniture ensembles for living room, dining room, bedroom, and office, the Ferrini collection represents a skillful blend of cultural insight (Marco is a former professor of art history) and innovation (he holds patents on production techniques that have revolutionized Italy’s billion-dollar-a-year furniture industry). But, in his own words, Marco Ferrini is a devotee of Lord Krsna first and a businessman second. 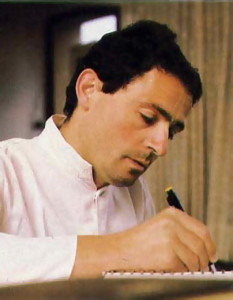 At the end of each day, after trading in his Gucci suit for a simple cotton dhoti, Marco spends the evening hours chanting Hare Krsna on beads, reading Bhagavad-gita, and speaking with visitors about the philosophy of Krsna consciousness. He lives with his wife Marisa and his father and mother in an elegant three-story villa overlooking the Ponsacco countryside. One large room has been converted into a temple, complete with Deity forms of Lord Krsna, an altar, musical instruments, and a library of spiritual literature. He makes good use of his managerial skills, too. Apart from being a member of the board of directors for the International Society for Krishna Consciousness (ISKCON) in Italy, Marco is president of Villa-Vrndavana, ISKCON’s rural asrama and artists’ center near Florence. 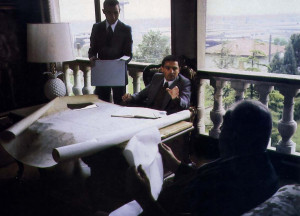 the plans undergo a stringent review by Marco and some of his staff.

Marco Ferrini grew up in Ponsacco. He served his apprenticeship there before going on to earn his M.A. at the Magistero dell’ Arte in Florence. By age twenty-five he had already made his first million, won the coveted Golden Legion Award for craftsmanship, and received dozens of other honors for innovative design and production—all of which left him with the sour taste of success. 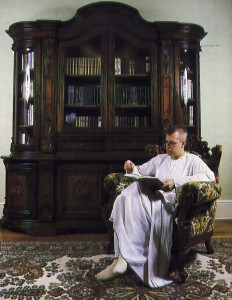 A bookcase of walnut and ebony, the front pane is inlaid with floral marquetry

“Wealth at first was intoxicating,” he remembers. “I left my parents, whose religious life was always something of an anachronism to me, and moved to the Riviera. Yachts, big money, fancy cars and women. The whole useless picture of affluence. I turned to philosophy in disgust, but quickly grew nauseous of Nietzsche. On the pretext of studying ancient techniques of woodworking, I grabbed a plane to India, thinking perhaps someone in the East would know what life was really all about.”

Marco traveled through India, Tibet, Thailand, China. “It was very intriguing, but inevitably all the so-called gurus I met just stared at my gold watch.” 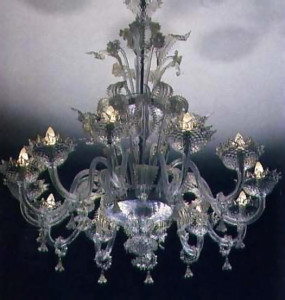 A lotus-shaped crystal chandelier with dew drop pendants. Marco designed the bookcase for the Krsna asrama in Valencay. France.

On a subsequent trip Marco met Srila Prabhupada at the Krsna temple in Vrndavana (where Krsna appeared five thousand years ago) and heard from him the teaching of Bhagavad-gita: that within the body is the eternal soul, part and parcel of Krsna, or God, and that one’s true satisfaction lies in reviving that lost relationship with Him by chanting His holy names and. offering everything for His service. “I left India that time with something very special in my heart. Everything I had seen and heard had impressed me: the devotees’ dedication to Krsna, the chanting, the elegant simplicity of their lives, and, above all, the purity of Srila Prabhupada’s teachings. ‘Your talents, like everything else, also belong to Krsna,’ he told me. ‘Go back and work for Krsna, and He will protect you.'” 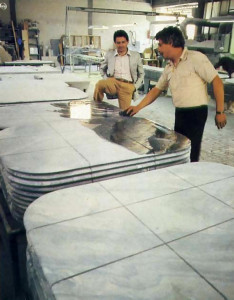 Marble slabs, cut and shaped for tabletops, receive a final washing, at a Ferrini workshop, one of five near Ponsacco. “Some of my artisans have become enthusiastic about the hand-crafted pieces for Krsna’s temples.” says Marco. “and they volunteer their services as a devotional offering.”

Upon returning to Ponsacco, Marco spoke frankly with his wife and parents about what he had learned. To his great pleasure they found his arguments appealing, and the next day house cleaning began. Out went the television, out went the wine and meats, out went Nietzsche, and in came Krsna. 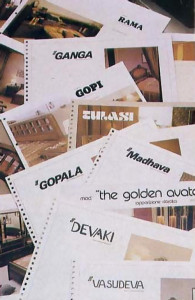 Each Ferrini catalog displays a name associated with Krsna, such as Ganga (the sacred river Ganges), Garuda (a divine bird), and’ Tulasi (a plant very dear to Lord Krsna) .

If the transition from magnate to monk seemed inconsistent to some of his neighbors and friends, Matsya eased the shock with a demeanor as affable and winning as linguini a la pomo d’oro. Municipal officials, factory owners, architects, delivery boys, the telephone repairman—everyone received an equally warm “Haribol!” (“Chant the name of Hari [Krsna]!”), and no one left his villa-turned-temple without sampling the milk sweets offered to Lord Krsna and stocked in a large cookie jar by the front door.

Just to reassure his staff and clients, Matsya maintained his familiar aristocratic appearance. Still, everyone knew he had changed. For one, he was now vegetarian and took no liquor, in a region where wine and venison were high social tradition. For another, little things always gave him away: three strands of small wooden beads, signifying spiritual initiation, peeked shyly out from beneath his starched collar; a photo of his spiritual master hung conspicuously in his office among the Renaissance portraits of Italian nobility; on his shelf, books of Sanskrit stood out next to the collected works of Dante. 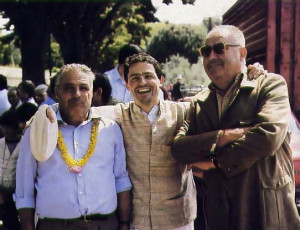 Marco and friends pose triumphantly at the annual farm competition in San Casciano, where cows from Krsna’s farm outside Florence took first and second prizes as best milkers

“They couldn’t understand why a successful Italian businessman would become a devotee.” he says. “People here are victims of a historical allergy to saints. The word priest is pejorative, synonymous with hypocrisy.” 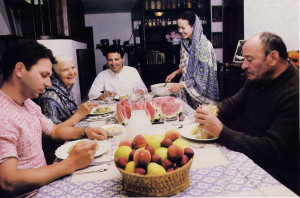 At dinner: Marco and his wife, father, and mother share sanctified food with guests.

Matsya’s competition called Matsya’s biggest client and said that Matsya was leaving everything to become a monk. “Now, this client is a man who trusts me with his entire fortune. One line of furniture alone may cost him ten million dollars to put into production. He raced to my office to ask if becoming Krsna conscious meant having to leave one’s work. ‘Listen, Luigi,’ I told him, ‘Krsna never tells you to give up what you’re supposed to do. He just wants us to do our work conscientiously as an offering to Him.’ The man was relieved. Eventually he even began making donations to the Krsna temples in Italy. Now he says that he never even doubted my decision. ‘I was just testing your sincerity,’ he says.” 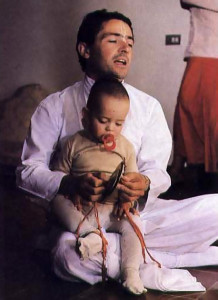 Others, however, took a poor view of Matsya’s spiritual dedication. “Some people were afraid to order millions of dollars in goods from a Hare Krsna devotee,” Matsya explains. “They thought it might affect sales somehow.” Among his inner staff, Matsya discovered three men playing on those sentiments to steal the accounts of doubting clients. Matsya was undeterred. He dismissed the traitors, released the accounts, and continued chanting Hare Krsna.

“I studied Bhagavad-gita and learned how to lecture on yoga, on work as a sacrifice to God, and also how to cook prasadam [sanctified foods]. On Sundays my wife and I would take our daughter and drive to Pisa to chant and distribute Hare Krsna magazines and sweets we had prepared. People were amazed to learn who I was. Some even became clients, Business tripled in three years.” 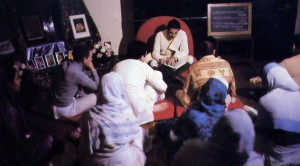 Each morning in his villa, Marco leads a discussion on the Sanskrit literatures that form the basis of Krsna conscious philosophy.

But how to reconcile a life of comfort and wealth with a belief in the nonmaterial soul and detachment from the world?

“The question is not how much or how little you have,” Matsya says, “but what you do with your resources. Perhaps, by nature’s arrangements, one is poor, another rich. But nothing is ours, really. I am fortunate. I have a chance to make money and spend it for Krsna. After all, it is His, so I help build temples, print translations of scriptures. And I also try to be a good example for others by following spiritual principles very carefully.” 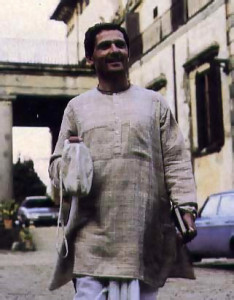 Dressed in traditional clothes and carrying prayer beads, Marco sets off to inspect renovation work on the Krsna farm near Florence

To receive initiation, Matsya agreed to follow four regulative principles—no meat, fish, or eggs; no intoxicants, including coffee, tea, or cigarettes; no illicit sex; and no gambling—commitments that have even influenced his designs. Leather, for example, is out in all Ferrini creations, since using leather tacitly condones animal slaughter. Instead, his research team has invented a fabric stronger, warmer, and more versatile than leather. Now other designers have begun imitating the Ferrini leather substitute (partly because it’s also cheaper than the real thing.)

Today, five years after his initial meeting with devotees, Matsya-avatara and his family lead busy lives of service to Krsna. His wife, Manu-patni dasi, engages her talents as bookkeeper to manage Ferrini Designs. Matsya’s mother, sixty-five-year-old Ananda-vrndavana dasi, cooks, cares for the temple, receives their many weekly guests, and keeps an immaculate temple. Matsya’s father, sixty-seven-year old Caitanya-Nitai dasa, retired from the large construction firm he once directed, now heads renovation work on the Hare Krsna farm in nearby Florence.

If you’re ever in Ponsacco and would like to meet Matsya-avatara and his family, just say “Hare Krsna.” Anyone can tell you where they live.