Back to Godhead > ~Featured~ > Ratha-Yatra—A Festival for Everyone

The world’s oldest celebration comes to the West. 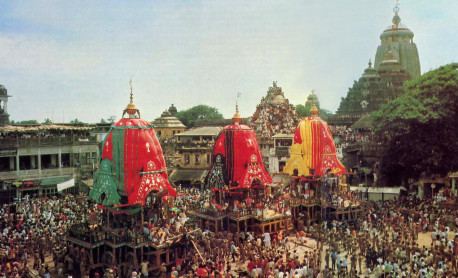 More than a million pilgrims jam the Grand Route for the annual Ratha-yatra (Festival of the Chariots) in Puri, India 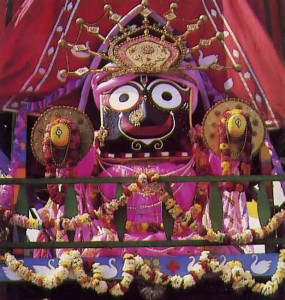 Lord Jagannatha, the center of worship, beams from the main chariot in a recent festival in Boston.

For thousands of years devotees of Lord Krsna have journeyed to Jagannatha Puri in India to take part in the annual celebration called Ratha-yatra, “The Festival of the Chariots.” During this festival devotees glorify the pastimes of Krsna in a two-mile parade of three fifty-foot-high chariots.

In recent years colossal chariots like these have been appearing in major cities around the world, leading many observers to wonder, amid the excitement and joy of the celebration, What does it all mean? Who are those figures riding on the chariots? and Where did this festival come from? 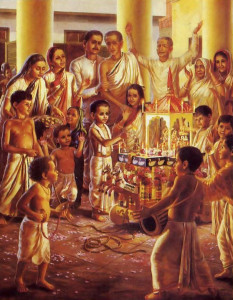 As a child in turn-of-the-century Calcutta, Srila Prabhupada gathered his friends each year for a miniature chariot festival. More than sixty -five years later, he would enact the same festival on a magnificent scale in many Western cities.

The Ratha-yatra festival commemorates a meeting that took place between Lord Krsna, the Supreme Personality of Godhead, and Srimati Radharani, His most beloved devotee, when They were present on earth five thousand years ago. Once Lord Krsna, His brother Balarama, and His sister Subhadra journeyed on a chariot to Kuruksetra, India, to observe the ancient Vedic custom of bathing at a holy place during a solar eclipse. On this auspicious occasion many great devotees of the Lord were reunited with Him. Foremost among them were the devotees from the rural village of Vrndavana, where Krsna had spent His early years before He had left to live as a king in the opulent city of Dvaraka. During Krsna’s absence from Vrndavana, the devotees there—especially Srimati Radharani—always thought of Him and longed for His return. So when Srimati Radharani met Krsna at Kuruksetra, She invited Him to come back to Vrndavana and again enjoy loving pastimes with His devotees there. Today those who take part in a Ratha-yatra festival can share in the feelings of Krsna’s devotees who drew Him back to Vrndavana with their love. 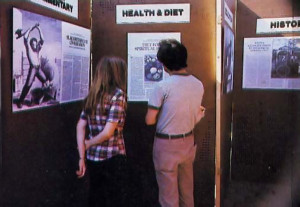 At the festival site n New York’s Central Park, participants pause at a display of highlights from

One shouldn’t think that Ratha-yatra is an empty ritual, a mere imitation of a remote historical event. Although the Jagannatha Deity riding on the chariot may appear to be a wooden statue, He is actually Krsna Himself. By Krsna’s mercy and omnipotence, He appears as the Deity to give us the opportunity to see Him and serve Him despite our limitations. Though nondevotees cannot understand how the Deity can be God, the Deity reveals Himself to those who serve Him sincerely. We should not conclude, however, that worship of any form is worship of God, any more than we would think we could drop our mail into any box on the street and have it reach its destination. Because the Jagannatha Deity is carved according to the authorized Vedic scriptures, worshiping Lord Jagannatha is worshiping God, just as putting our mail in a mailbox authorized by the post office is the same as bringing the mail to the post office. So worshiping Lord Jagannatha as He rides His chariot in the Ratha-yatra festival is not idolatry; it is a sublime method of reviving our dormant love of God. 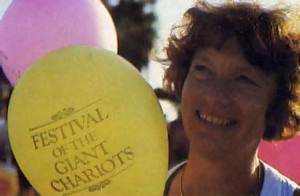 Those familiar with the humanlike image of Lord Krsna holding a flute in His two hands may wonder at the unusual appearance of the Jagannatha Deities rounded bodies, no visible hands or legs, wide-open eyes. The story behind the Deities is that once, thousands of years ago, a king named Indradyumna felt inspired to establish a temple of Krsna. So he comissioned a sculptor to carve the Deity. The sculptor pledged to carry out the work in three weeks, provided the king would let him work alone in the temple and not barge in on him. But after only two weeks had passed, the king became very anxious to see how the work was coming, and he entered the temple. There he found only the apparently incomplete forms we see today. The king was despondent until he had a revelation that the Deities in his temple were the fully manifested forms of the Supreme Personality of Godhead, and he began the elaborate worship of Lord Jagannatha, Lord Balarama and Srimati Subhadra that continues to this day. Until the 17th century the West was unfamiliar with Lord Jagannatha and the Ratha-yatra festival. It was then that the first British came to Puri and saw the festival, with its massive chariots, huge Deities, and immense and enthusiastic crowds. The British called Jagannatha juggernaut, a word that soon came to mean “an overwhelming, irresistible force.” 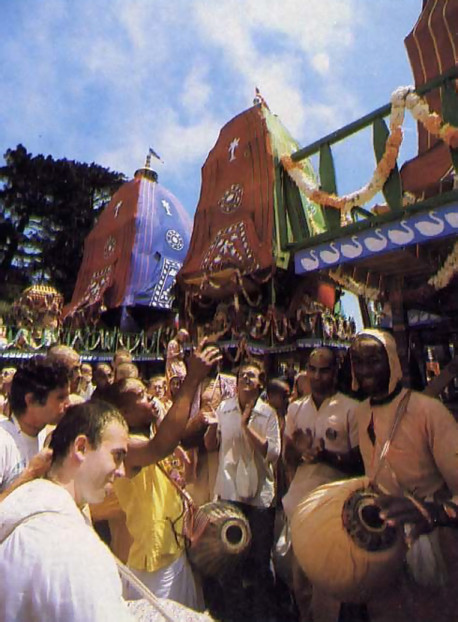 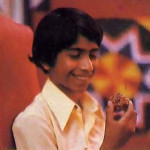 The British colonists were certainly impressed with the yearly Ratha-yatra festival at Puri, but of course they never considered importing it to London, for they saw it as merely an overzealous display of idolatry by the “Hindoo heathen.” It would remain for one who knew the true import of the word jagannatha—Lord (natha) of the universe (jagat)—to bring Ratha-yatra not only to London but to New York, Chicago, Los Angeles, and other points West.

The festival brings together more than a quarter of a million celebrants of all ages for feasting and fun.

In early 20th-century Calcutta that faithful worshiper of Lord Jagannatha was growing up in the home of Gour Mohan De, an unalloyed servant of Lord Krsna. The boy—later to be known as His Divine Grace A.C. Bhaktivedanta Swami Prabhupada, founder and spiritual guide of the International Society for Krishna Consciousness—was from his early childhood a great devotee of Lord Jagannatha and Ratha-yatra. From the age of five Srila Prabhupada organized an annual Ratha-yatra festival in his neighborhood in Calcutta. His father bought him a three-foot-high Ratha-yatra cart and helped him decorate it, following the details of the Puri originals. During Srila Prabhupada’s Ratha-yatra festival, his friends pulled the cart with a rope while Srila Prabhupada chanted, played a clay drum, and led the singing, dancing, and distribution of prasadam (vegetarian food offered to God). Each year Srila Prabhupada made various improvements on both his Ratha-yatra cart and the children’s festival. 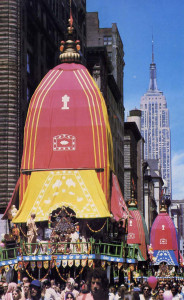 Lord Jagannatha lends the procession down Fifth Avenue in a chariot whose spire seems to rival the Empire State Building’s.

Much later, in 1965, Srila Prabhupada came to the United States on his spiritual master’s order to spread Krsna consciousness in the West. Soon after the Krsna consciousness movement got started, Srila Prabhupada inspired the first Ratha-yatra ever held outside of India. Recalled Jayananda dasa, “The first year, 1967, we just rented a flatbed truck and started out in the Haight-Ashbury district of San Francisco. We decorated the truck with flowers and put the Deities on the back, and the girls passed out fruit. A good crowd walked along with us at the beginning, and when we turned off Haight Street a smaller group of people came with us and we went all the way to the beach.” Over the years Jayananda and other devotees spread the festival to other cities. 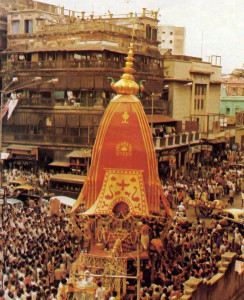 The Krsna Society’s Ratha-yatra in Calcutta brings thousands into the streets to glorify Lord Jagannatha.

Now Ratha-yatra is performed in dozens of cities around the world each year. Several mayors have declared special Ratha-yatra days. At one festival in Vancouver, Canada, Mayor Jack Volrich said, “I hope this Festival of the Chariots, one of the greatest historic festivals in the world, will become an annual event in Vancouver . . . so we will be able to share some of the very important, sincere, and deep principles of morality that you espouse.”

While it is true that taking part in the Ratha-yatra festival frees one from bad karma, the main reason it has become popular the world over is because it is just plain fun. Elephant rides, movies, dancing, drama, classical and popular art, exotic food—there’s something for everyone at Ratha-yatra. 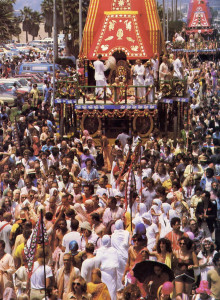 So when you’re out in the sun at some park or beach on a weekend this summer, don’t be surprised if you look up and see three fifty-foot-high, silk-peaked chariots cruising along amidst waves of dancing and chanting celebrants. Though you might think you’re seeing a fleet of clipper ships with multicolored sails, you’re actually looking upon a millennia-old festival—Ratha-yatra. Follow along and dip into an ocean of transcendental delight.