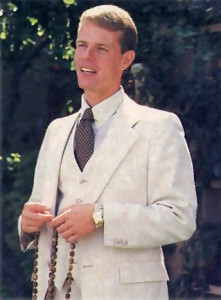 Q. How can I find more time for chanting? I like it, but I’m usually too busy.

A. We’re all busy, but eventually we have to die. And then what? By the law of karma, anyone who is not God-realized will have to stay in the cycle of rebirth and death. So our real business should be to become God-realized and get out of the karmic cycle. And chanting the Hare Krsna maha-mantra is the surest way to do that.

Q. If I want to take up chanting, do I need a teacher?

Q. If I chant Hare Krsna, will I be able to levitate?

Q. Why not keep the Hare Krsna mantra secret, like other mantras?

A. If something can actually do some good for others, then who but a rascal would keep it secret and sell it for a fee? The flare Krsna maha-mantra can deliver everyone from the karmic cycle of rebirth and death. So Sri Krsna Caitanya, the incarnation of God for this age, ordered His followers to spread the maha-mantra “to every town and village.”

Q. If you chant a mantra in public, won’t it lose its power?

A.A mantra can never lose its power. (Here we’re not talking about the nonsense syllables that phony gurus are marketing nowadays. These “mantras” never had any power to begin with.) At any rate; a mantra is a combination of sacred sounds—names of God and His energies. So just as God is inexhaustible, a mantra is inexhaustible. Unlimited numbers of people can chant it unlimitedly, and it will always have its power. And the Hare Krsna mantra is known as the maha-mantra. Maha means “great,” or “the most powerful.”

Q. I don’t see that everybody has to chant Hare Krsna. Don’t all paths lead to the same place?

A.If you take a flight to Paris and your friend takes a flight to London, you’ll go to Paris and he’ll end up in London. It’s not that you’ll both arrive in Paris. Now, the Vedic literatures explain that life’s highest destination is to revive our relationship with Lord Krsna in the spiritual world, and that the path is the chanting of the Lord’s names. So if you’re doing something else, you’ll end up in a different place.

Q. God is everywhere. So why chant Hare Krsna? I’m already “back to Godhead,” right here and now.

A. That may be, but there’s a difference. For instance, the state government is running both the university system and the prison system. So it’s all the same, in a way, but where would you rather be—UCLA or San Quentin?

Similarly, God controls both the spiritual and material worlds. But the material world is a place where people who’ve forgotten Him go through all kinds of trouble—until, finally, they come to their senses and revive the relationship. And the best way to do that, is to chant God’s names. Then, as you say, you’ll be “already back to Godhead, right here and now,” and when you pass away you’ll live with Krsna eternally in the spiritual world.