A visit to a tropical paradise. 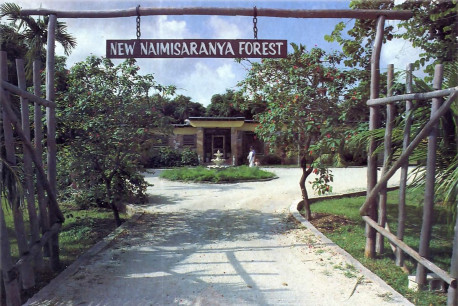 Each week hundreds of guests come through the entrance way – New Naimisaranya Forest gets its name from a pilgrimage site in India. 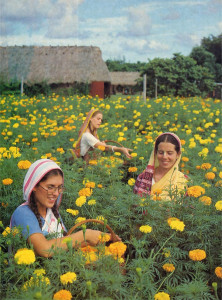 Stunning yellow and orange marigolds and superfragrant night-blooming jasmines are just two varieties that thrive here. Un the distance we see a chickee, a Seminole-style pavilion made of cypress logs and thatched palm fronds.

Jennifer is the manager of a tropical plant nursery in Key West. A thoughtful young woman, she sees herself as “a person who has always been searching for something more to life.”

“A few days ago,” says Jennifer, “a woman stopped by the nursery and mentioned she’d just been to an interesting spiritual asrama in Miami. She said I ought to drive up and see for myself.

“On the way there, I was picturing some kind of tall building. But when I finally arrived, I saw fruit trees and flowers and peacocks and cows and a lake with swans.” 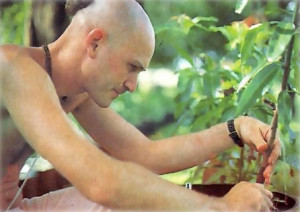 Coordinator Narahari dasa has made grafts from eight of the world’s choicest varieties of mango trees.

Jennifer walked in through the Malaysian coconut palms and passed under a sign that said “New Naimisaranya Forest” (after a pilgrimage site in India). A woman in a sari said hello and invited her to sit in the cool shade of a chickee, a Seminole-style pavilion made of cypress logs and thatched palm fronds.

“It’s time for lunch,” the woman said. “I’ll bring you a plate of prasada—it’s vegetarian food we grow right here in our garden and offer to Krsna. It’s spiritual.”

Though she had been a vegetarian for ten years, Jennifer found the prasada “a real surprise.” After lunch she joined some other guests for a walk around the grounds. 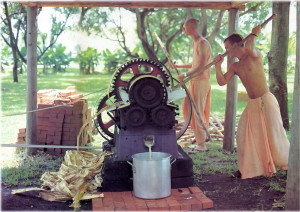 The guide was the community’s Coordinator, Narahari dasa. Before starting his work with the Krsna consciousness movement in 1972, he graduated in premed from the University of Maryland and played drums with a number of prominent jazz musicians.

“Now I’m playing the khola [an oblong Indian drum] for Krsna—and wondering what it will be like to hear Him playing His flute.

“Before,” he says, “I was just living the ‘good life’ and trying to harmonize with nature. But one day a friend gave me a copy of Bhagavad-gita As It Is, and I was struck by the idea of karma 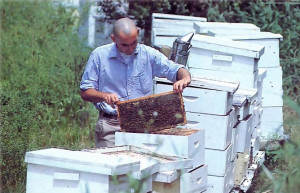 Five tons of honey a year come from fifty hives

“I saw that although I was getting everything I wanted at the time, it was just coming from my past good karma, and sooner or later that good karma would run out and I’d have to get old and diseased and die. And then there’d be my next life. You know-it was like a credit card. ‘Enjoy now. Pay later.’

“So,” he says, “I decided to go by the Krsna center-before ‘later’ came around-and check things out. I used to study Bhagavad-gita, which I found out means ‘The Song of God,’ and then I’d go to the Sunday festivals with lists of questions about karma and reincarnation and how to get beyond it all: I liked the answers the devotees gave me, so to learn more I eventually moved in.” 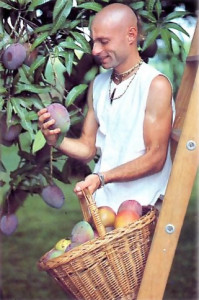 Says Narahari, “Each hive has sixty thousand bees, and each bee works hundreds of flowers a day. We offer all the honey to Krsna, so we’re engaging millions of bees and flowers in Krsna ‘s service.” The mangoes taste sweeter here

Narahari showed Jennifer and half a dozen other guests the two acres of marigolds, Lake Bindusarovara, the cowpens, the sugarcane field, and the fifty beehives that produce over five tons of honey a year.

They also saw the fruit trees, including eight varieties of mango from all over the world, ten varieties of avocado, five of banana (including Mysores and Rajpuris from India), four of plantain (including dwarf Puerto Rican), two of papaya, six of orange, three of lime, two of kumquat, and ten of star fruit (yes, the fruit is star-shaped). And they saw other fruit trees: lemon, grapefruit, litchi, loquat, custard apple, sugar apple, tropical apple, star apple (which tastes like a blueberry sundae), sea grape, fig, pomegranate, governor’s plum, strawberry, Spanish lime, jackfruit (whose fruits can weigh up to forty pounds each), Barbados cherry, Mamey sapote, black sapote (which tastes like chocolate pudding), tamarind, white sapote, bael fruit, drumstick (named for the shape of its pods), monstera deliciosa, golden coconut, miracle fruit, sapodilla, and Jobaticaba (which produces grapes directly from its bark). 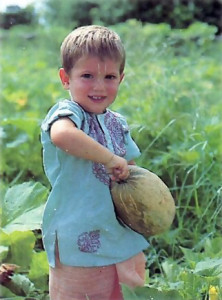 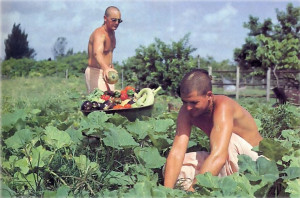 Vegetables include Indian varieties like
kerala (bitter melon), khira (sweet cucumber),
and /au (or taki-they grow up to three feet long and hang from trellises like chimes).

“Especially in the morning,” says Narahari, “when our guests walk near the flowering jasmine trees and all the rest, they say they feel intoxicated. And they say the fruit here tastes much sweeter than what they find in the market or the commercial groves or farms. An international group called the Rare Fruit Council has tasted our fruit, too, and they say the same thing.

“We know the reason. Srila Prabhupada once told us the flowers would smell more fragrant and the fruit would taste sweeter because this is Krsna’s land. Krsna makes everything nicer, because we’re offering all the produce to Him. For instance, we use the marigolds for decorating Krsna’s Deity forms in the temple. And everything we eat we grow right here on this land and offer to Krsna first on the altar.”

Says Narahari, “People come to the Sunday feast and tell me, ‘Hey—I thought you said you didn’t eat meat!’ 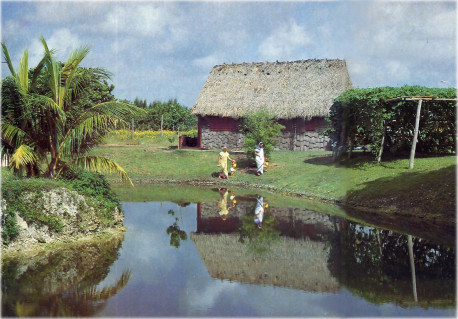 Lake Bindusarovara was once a neglected pool. 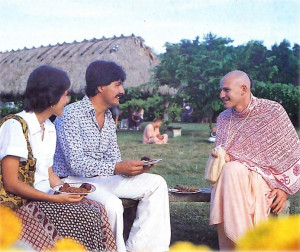 Narahari says guests find the Krsna cuisine surprisingly satisfying. “Actually.” he tells them, “these are the original tastes the original recipes.”

“Actually,” he says, “these are the original tastes—the original recipes people knew about millions of years ago (and you can still find them in the Vedic literatures). These tastes come from Krsna. And so do all of us—so naturally we all like to eat these things. But now, because we’ve become contaminated the material world and twisted around so many ways, we’ve forgotten this Vedic knowledge and we’ve found other ways to try to satisfy these original tastes. One of those ways, of course, is eating flesh. But the tastes of kofta, pakora, badas—these are the original tastes.” 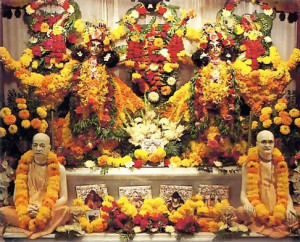 Their produce in the temple – through Srila Prabhupada and his spiritual master (lower altar) to Krsna, in the form of Sri Caitanya Mahaprabhu and Sri Nityananda Prabhu (upper altar).

It was Srila Prabhupada who first had the idea of giving Miami a tropical-spiritual paradise. In an early letter to the devotees he said, “You have excellent land there, and you should develop it very nicely. Miami has a nice tropical climate, so our center there should be made lush with fruit and flower trees. Just work sincerely, and Krsna will supply you with everything.” But New Naimisaranya Forest wasn’t always a paradise.

“A jungle,” says Narahari, “—that’s what this place was when we got here. The property had been abandoned for fifteen years. The main house, which no one had ever lived in, was infested with snakes and scorpions. And the underbrush was so thick we had to cut through with machetes. Fifteen years of neglect had made the pond an overgrown sinkhole and the mango and avocado groves a wild mess, and it was going to take a lot of hard work, but we could see tremendous potential here.

“Now,” he says, “we’ve completely renovated the main house, and we’ve put in a marble temple room, with a handcrafted altar for the Deities. And we’ve made the old pond into Lake Bindusarovara, with a full contingent of ducks, swans, and rare multicolored tropical fish that swim and play near the surface.

Assistant coordinator Raghava dasa explains, “Actually, this is the way Krsna consciousness works. Think of Srila Prabhupada coming here to the West. For him, America must have been more or less a jungle. The natives—ourselves—were totally in the dark about spiritual life. Really. What did we know about self-realization or God consciousness? But Srila Prabhupada saw the potential—and cultivated it.”

Just three years ago, before it became New Naimisaranya Forest, nobody paid much attention to this place. But now people come to visit almost every day of the year. Some, like Jennifer, are spiritual seekers. Others are just friends, stopping by to see how Krsna’s garden grows.