Back to Godhead > Devotees > Chanting > Prescription For The Age Of Quarrel

Prescription For The Age Of Quarrel 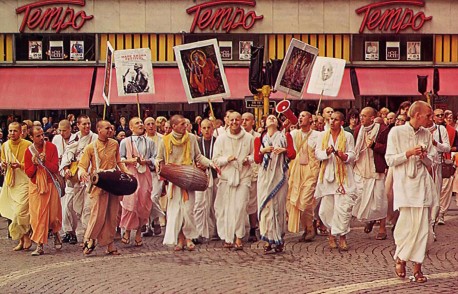 In Stockholm, Sweden, devotees fill a street with transcendental sound.

By now, the Hare Krishna people are a familiar sight on the sidewalks of the world’s big cities. As the smiling, robed devotees happily dance to the beat of drum and hand cymbals, the vibration of “Hare Krishna, Hare Krishna, Krishna Krishna, Hare Hare/ Hare Rama, Hare Rama, Rama Rama, Hare Hare” rises over the noises of the street. The newspapers may speak of a “new religion,” but the devotees, dancing and chanting among the skyscrapers, can trace what they’re doing far, far back to a certain gathering of sages, for instance, in a holy place in India named Naimisaranya, 5,000 years ago, at the very beginning of the present age. (See “Questions for the Welfare of the World,” page 3.) 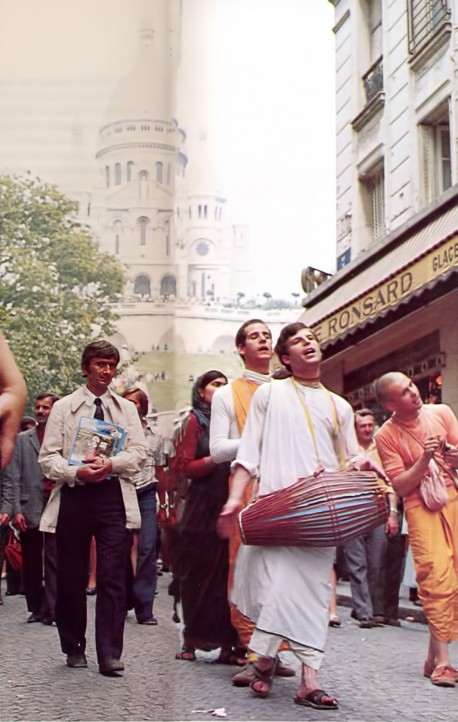 The sages were greatly concerned about the welfare of the people in this age, who usually know very little about spiritual life and who tend to be caught up in material activities and anxieties. In former ages, people were more inclined toward spiritual realization. But the sages knew that in this age of quarrel and hypocrisy, people would have shorter lives and would be increasingly quarrelsome, lazy, misguided and unlucky, and above all, they would always be disturbed. The sages prophesied, however, that the Lord Himself would descend in the iron age and would flood the entire world with ecstatic love of God by performing “sankirtana“—the public congregational chanting of the glories of God. 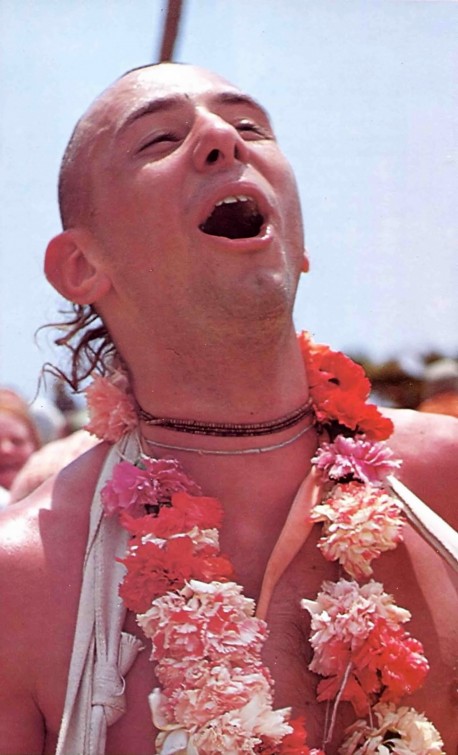 Some 4,500 years later, in 1486, Lord Caitanya Mahaprabhu appeared in West Bengal to fulfill their prophecy by inaugurating the yuga-dharma—the path of spiritual realization for this age. Lord Caitanya chanted and danced in ecstasy, and He also taught a scientific understanding of God and His energies. Lord Caitanya’s process was neither sentimental nor fanatical; it was firmly grounded on the most profound Vedic philosophy. Therefore Lord Caitanya’s sankirtana movement attracted the greatest logicians and scholars of the day in India, and it continues to attract intelligent and educated people today in the West. Lord Caitanya Himself was brilliant in logic and argument. Nevertheless, He emphasized the simple message of this verse from the Vedic scriptures:

Lord Caitanya foretold that every town and village in the world would one day hear this chanting. In 1966, when His Divine Grace A.C. Bhaktivedanta Swami Prabhupada, the founder-acarya of the International Society for Krishna Consciousness (ISKCON), arrived on the shores of America, this prophecy began to come true. Srila Prabhupada is a direct descendant in a line of spiritual teachers from Lord Caitanya. And now his students, in every major city of the world, are broadcasting the glories of the Lord, following the essential teachings indicated by the sages of Naimisaranya 5,000 years ago.

To spread a scientific philosophical understanding of Krishna consciousness, devotees distribute books such as Bhagavad-gita As It Is, Srimad-Bhagavatam and Krsna, the Supreme Personality of Godhead.

As a direct result of the efforts of ISKCON, the name “Krishna” is becoming just as familiar to Westerners as names of God like Jehovah, Buddha, and Allah. Nevertheless, people may still sometimes mistakenly think that Krishna is a “new god” or “the Hindu God.” Actually, God is one, the father of all living beings. Krishna is the same primordial Supreme Being we have always heard about. We may not have heard the name Krishna, but since we know that God is unlimited, we can understand that He also has unlimited names. So we shouldn’t be surprised to hear a name we haven’t heard before. The name Krishna is special, however, because it means “all-attractive.” We have heard that God is all-knowing and all-powerful, but it has not been very much emphasized that He is all-attractive. Since God is the most outstanding person, however, He must be the most beautiful, the strongest, the richest, the most famous, the wisest and also the most renounced. These are all attractive qualities. So the name Krishna—”the all-attractive one”—is practically a definition of God. Once we understand this, we should have no difficulty accepting the name Krishna as a genuine name of God. Similarly, “Rama” is another name of God. It means “the person who is the source of the highest pleasure.” And “Hare” is a call to God’s energy, which unites us with the Lord in loving devotional service. 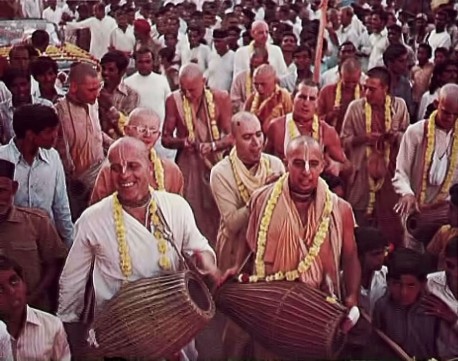 To chant God’s names is a simple and sublime way to elevate oneself to a fully spiritual life because we can associate with God just by saying His name. Since God is omnipotent, He is actually present in His name, and so when we utter His name, He is immediately with us. This association is extraordinarily beneficial. We naturally pick up the qualities of those with whom we associate. If one associates with drunkards, for example, one may also become a drunkard, and if one associates with thieves, one may also learn to steal. By the same principle, if one associates with God, one can also become godly. In this age, practically everyone is to some extent a victim of bad association, but by the mercy of Lord Caitanya one can immediately come to the platform of the most elevated association, association with the most pure, most exalted person—God Himself—simply by saying His name. Thus one can become free from all impurity and so become fully joyful. The personal lives of the devotees chanting on the streets afford practical evidence of the purity that results from Krishna consciousness; because they have intelligently taken up the chanting of Hare Krishna, they are no longer bedeviled by the vices of this age. 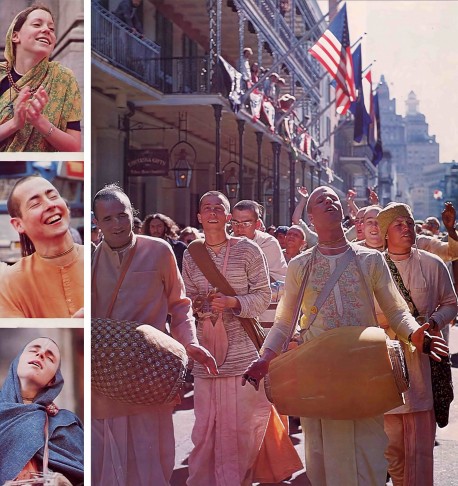 Lord Caitanya instructed His followers to chant Hare Krishna wherever people gather. Thus everyone can benefit by association with God, simply by hearing His names while passing by, or by remembering them later on. Formerly, people used to frequent temples, churches or mosques, but this custom is now rapidly dying out. God is so merciful, however, that if people will not come to Him, He will go to them. This is the essence of sankirtana.

When people see the devotees chanting, they usually wonder why the devotees dress so distinctively. After all, they say, spirituality belongs to the soul, not the body. The answer is that the body is also God’s and so should be used in His service. To remind people of God is a service to God. When people see a devotee, with saffron robes, shaved head and tilaka, a mark of devotion, on his forehead, they naturally think of Krishna, and they even say, “Oh! Hare Krishna.” Thus a devotee, simply by his appearance, reminds one of God and inspires one to chant the holy name of God.

A chanting party usually includes devotees who distribute books and BACK TO GODHEAD magazines. This literature presents the philosophy of Krishna consciousness in depth, so that one can study it carefully and understand it. Such literature is full of glorification of God, and therefore reading it is just as spiritually beneficial as chanting Hare Krishna.

Devotees also pass out food (usually sweets) that has been offered to Krishna. Such food is called Krishna-prasada, This is also Krishna’s mercy because that food has been prepared for Krishna and offered to Krishna and therefore has become spiritualized. By eating such sanctified food, one gradually purifies one’s consciousness and is relieved of the reactions of past sinful activities. In New York City alone, some 20,000 people a week get one of the transcendental sweets the devotees distribute.

So in these ways—by chanting and dancing, by distributing transcendental literature, and by handing out spiritual food—the devotees of the sankirtana movement are making the pleasure of Krishna consciousness easily available to people throughout the entire world.