Back to Godhead > ISKCON > Temples > In Denver, Colorado, and around the world…

In Denver, Colorado, and around the world… 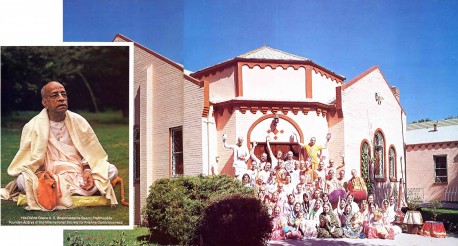 That’s natural. A living being is a combination of matter and spirit—matter externally and spirit within. So naturally we want to satisfy our physical needs, and after those needs are taken care of, there has to be something more. Higher than the body is the mind, and the mind, too, needs to be satisfied. That’s why every human civilization naturally includes some form of music, art, philosophy, and social culture. For some people, that seems enough. For others, however, it’s not. Higher than the body and mind is the soul and the soul too, needs to be satisfied.

Unfortunately modern society generally caters to the body and mind, but it does not consider the needs of the soul. When those needs are unfulfilled, we’re prone to a kind of creeping dissatisfaction, despite all material comforts. Out of thousands of men, a very few—perhaps only one—will have the insight to recognize that this incompleteness is due to a lack of self-knowledge. It is such a rare person who strives to purify his consciousness and achieve spiritual enlightenment.

Even among those who attain some measure of spiritual advancement, hardly one will truly understand Krishna. Krishna is the ultimate goal of spiritual life because He is the supreme form of eternity, knowledge and bliss. But one cannot know Krishna merely by mental speculation or yogic exercises. By these methods one may get a vague or impersonal idea of Krishna, but to actually know Krishna in truth, one should take guidance from a bona fide spiritual master who is a pure devotee of Krishna. Such a devotee acts with his body, mind and words only for the service of Krishna, and therefore he is considered a fully liberated soul, even in this material world.

The Denver center for Krishna consciousness, like the more than sixty-five other centers of the Hare Krishna movement around the world, offers a program of spiritual enlightenment under the auspices of such a pure devotee—His Divine Grace A.C. Bhaktivedanta Swami Prabhupada. Although Srila Prabhupada is the acarya, or spiritual director, of the International Society for Krishna Consciousness, he has not invented his own method of attaining spiritual knowledge; rather, he is simply transmitting the knowledge that has been preserved for thousands of years in the classic guide to spiritual perfection known as Bhagavad-gita.

By spreading the chanting of the Hare Krishna mantra (the transcendental sound vibration you see on the preceding page) and by spreading the Gita’s message of spiritual enlightenment, the Krishna consciousness movement is creating a transcendental atmosphere of peace and spiritual satisfaction. You’ll find out more about it in the pages of BACK TO GODHEAD.