She had money, glamor, exciting work, admiring friends—but she gave it all up for Krsna. 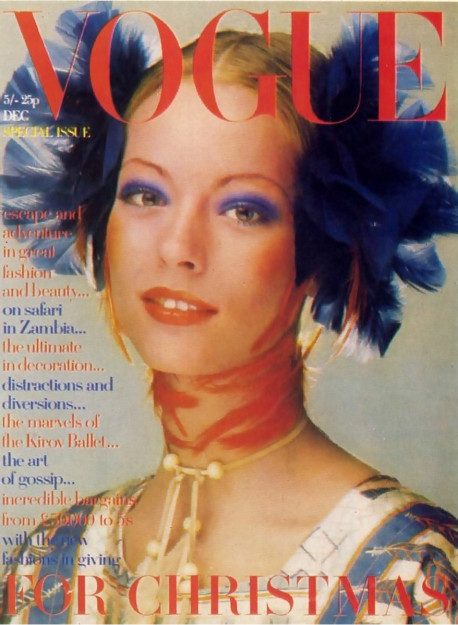 Anne Schaufuss has lived what most women can hardly dream. Born of an illustrious Dutch stage family, she entered the Danish Royal Ballet at age six and performed during the next ten years, until she grew too tall (5’11” by age sixteen). Not one to be easily discouraged, she went on to become Miss Denmark of 1965 and set out soon after to earn a living. Within six months her picture appeared on the cover of Vogue magazine, and that launched her career as one of Europe’s most sought-after fashion models.

A million dollars and three dozen magazine covers later, Anne had wealth, fame, and apartments in most European capital cities. Anne Schaufuss had everything. Except, maybe, happiness. But that posed no problem. In her world if you didn’t have something, you sent out for it.

The young woman sitting before me now wears no makeup or jewelry. Her dress is a single piece of embroidered cotton, nine yards long, wrapped around the waist and brought over the head. It’s a far cry from the dreamlike creations of the world’s finest designers, but since becoming a devotee of Lord Krsna, Anne prefers the reserved appearance that a sari offers. 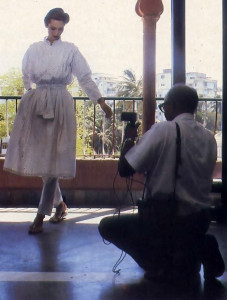 “Women who live for the next new dress,” she says, “do not realize that true beauty lies in knowledge of the self as soul and not body. As a model I had admiring friends, exciting work, money, but I always felt uncomfortable with the superficiality of that sort of life.”

In 1973, while flying from one modeling assignment to another, Anne met a young woman in Orly airport, Paris. She told Anne that she came from the Krsna temple, where everyone practiced bhakti-yoga devotional service to God.

“I was familiar with yoga exercises,” Anne explains, “and sensed that yoga led to a superior kind of life, but I told the devotee it wasn’t really for me, since I didn’t have the time and it didn’t seem to go along with my work. She explained that bhakti-yoga was very simple and that I could do it anywhere, anytime. She gave me a book and the address of the Paris temple, and I promised to visit.” 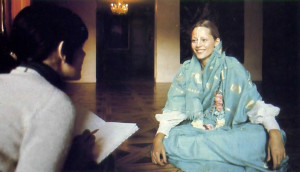 Satarupa at home with devotees (in Paris, during an interview for Paris-Match ),

Two months later, she did. “There was a class on Bhagavad-gita going on, so I sat down with thirty or so other guests and listened to Bhagavan Goswami speak about how conflict arises from people falsely identifying themselves with their bodies: white, black, man, woman, rich, poor. The temple was located in a very elegant section of Paris, but the devotees appeared humble and unpretentious. Their clothes were simple, and everyone sat on the floor.

“After the class I went to Bhagavan Goswami and told him I wanted to do yoga. ‘All you have to do is chant Hare Krsna,’ he said. He explained that the name of God is not different from God and that chanting puts one in direct contact with God through His holy name. ‘Is that all I have to do?’ I said. Actually, I wasn’t sure how that was yoga, but I saw no reason not to try.” 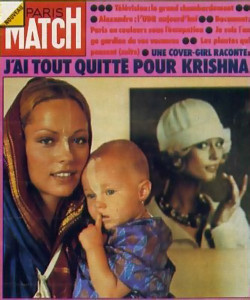 Satarupa performs her various duties, both professional and devotional, for the pleasure of Lord Krsna

Anne chanted whenever she had a few minutes: in airplanes, in hotel rooms, between photo sessions. “Chanting helped me give up bad habits. It was amazing, especially since I wasn’t trying very hard. I had been smoking since age thirteen, for example. When I started chanting Hare Krsna, I would pick up a cigarette and tell myself, ‘I’m going to smoke, but first I’m going to chant one round on my beads.’ After one round I would think, ‘No, I’m going to chant two rounds, then smoke.’ By the time I finished two rounds of chanting beads, I felt so good I didn’t need the cigarette any more. 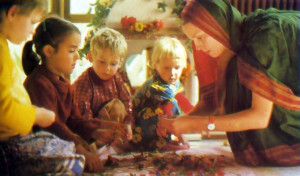 Saturupa shows children from the farm’s elenmentary school how to string newly picked flowers into garlands to offer to Lord Krsna.

Other changes took place for her as well. “In the beginning I chanted with a playful attitude, but after a while I discovered that the chanting had changed my vision of things. I was no longer impressed by a ride in a Rolls Royce or by seeing my picture on a magazine cover. Socializing with nondevotees became distasteful. Instead of going to parties, I would visit the Krsna temple in different countries and bring flowers for the altar. I liked the devotees’ company and always felt at ease around them.” 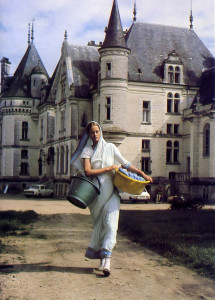 As she continued to chant Hare Krsna and study the Bhagavad-gita, Anne’s dedication to Krsna consciousness grew. It took time, however, for her to reconcile work and spiritual conviction. Parking herself under a table between modeling sessions to chant the daily rounds of beads didn’t win much applause from her agency. Preaching detachment from sex and drugs to the other models didn’t go over very big either.

“I used to bring girlfriends to the temple, but all it came to was rumors that my involvement with Krsna consciousness was just a publicity stunt. Finally one day I picked up the phone, called my agent, and told him to cancel all my bookings because I had decided to move into the temple.”

Anne swore off modeling for three years. “I did menial jobs. I washed the temple floor and made flower garlands for the altar. Then one day I cooked and everyone liked it, so for a whole year I cooked for 110 devotees.” Like the other devotees in the temple, Anne followed the strict routine of daily devotional activity. Each day she rose at 4:00a.m. to bathe and take part in morning ceremonies and classes. Then she chanted for an hour and a half on her beads. The entire community took breakfast together at 8:30, and then each went off to his or her service for the day. For several months Anne worked intensely on translating the Bhagavad-gita into Danish and took part in Hare Krsna festivals. She even organized a soiree at a fashion photographer’s studio. On her guest list were friends from the modeling agency, members of the press, and acquaintances from Paris society. For the event devotees prepared a banquet of exotic vegetarian dishes, and devotee musicians played songs on classical Indian instruments. The next day articles started appearing in the press across Europe: “Cover Girl Chooses Krishna.” In 1974 Anne traveled to India with the Paris devotees for an annual pilgrimage. She visited Vrndavana, where Lord Krsna had performed His pastimes five thousand years ago, and she saw Mayapur in West Bengal, the birthplace of Sri Caitanya Mahaprabhu, who had inaugurated the congregational chanting of Hare Krsna as the most sublime method for reviving love for God in the present age. When she got back, Anne requested initiation. She is now Satarupa-devi dasi, a disciple of His Divine Grace A.C. Bhaktivedanta Swami Prabhupada. At initiation she vowed to abandon all intoxicants, meat-eating, gambling, and sex outside of marriage, and to chant sixteen rounds of beads daily. She strictly follows these principles despite constant travel, for she has resumed modeling—but with a difference. Her purpose now is to help pay for the construction of a school for devotee children. “To help build the school I have to go where the work is and not be afraid of falling down into bad habits again. I try to remember my spiritual master, Srila Prabhupada, who came alone to the West without any money or friends to spread love of Krsna, and that gives me inspiration.” In her modeling, Satarupa says, she finds practical illustrations of Krsna conscious philosophy. “Once I was modeling four million dollars worth of diamonds. The owners, the security guards, the studio people, everyone was worried and nervous that someone might try to steal them. I had to stay in my seat the whole time and not move about the studio while wearing the stones. The diamonds were very beautiful, but what a waste of money and what a terrible position the people who like to wear them must be in, constantly in danger of being robbed and killed just for wearing such things. Later I was thinking, We may have such opulence in this life, but just like those diamonds I wore and then finally had to give back, everything that’s given to us in this material world has to be given back when we leave. It’s all temporary. I model Dior gowns, Sherrer haute couture, St. Laurent originals, but everything I wear I have to give back. In this world we’re allowed to use Krsna’s energy for a little while, like this body, but that too will grow old, and then we have to give it up.” 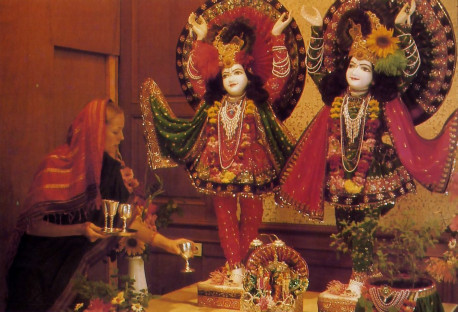 Duties in the temple

Duties in the temple, such as preparing Krsna’s altar, occupy much of Satarupa’s time when she is not on assignment. “The worship in the temple,”· she says, “helps me focus my attention on Krsna as the Supreme Person.”

When modeling, Satarupa refuses furs, cigarettes, and alcohol. This limits her assignments but opens a lot of discussions. “People are curious about Krsna consciousness. All they know is what they read in the papers, but when you talk with them they get very interested and start thinking about it seriously.

“I encourage them to just try chanting Hare Krsna. They have nothing to lose and everything to gain. It doesn’t cost anything, but it brings satisfaction, whether you’re a success or a failure materially. Actually, material success is failure, because it never brings satisfaction.”

When she has time to visit the Krsna conscious farm in France, Satarupa teaches the children stories from the Vedic scriptures and cooks vegetables in cream sauce. She also takes time to answer letters from friends, famous and obscure, who want to know whether what they read in the fashion magazines is true, that she really has found happiness in serving Lord Krsna. 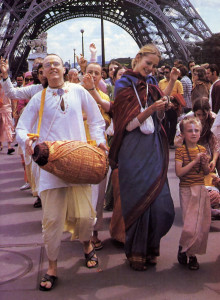 In Paris (opposite) she joins devotees in sankirtana, congregational chanting of the Hare Krsna mantra.

“It doesn’t matter how much success you have if you don’t have Krsna,” she says. “That’s a fact. Without Krsna, just headaches. There’s a young girl, Barbara, who travels with me. She is very pretty and wanted to become a model. So I have her meet all these models, eminently successful people, and afterward she just shakes her head. ‘They’re not happy!’ she says. ‘They’re in total anxiety!’ She’s beginning to realize that there’s less to glamor than what most people think. If you become rich, you need dogs and locks. Become a model and spend your time worrying about being on next month’s cover or waking up with a wrinkle. But become Krsna’s devotee, and your life becomes sublime.”