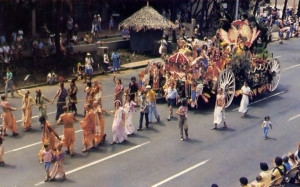 Honolulu, Hawaii—Hare Krsna devotees recently took part in the gala floral parade celebrating Hawaii’s Aloha Festival. In tune with the festival’s theme (“Music, the International Language”), they chanted Hare Krsna, accompanied by traditional Indian instruments, as they rode in the three-mile parade on their float.

The Hare Krsna float won second prize among ninety-five entries in the parade, which was televised statewide and seen by nearly half a million people. Devotees had worked day and night for a week to build the float and decorate it with red and white carnations and Hawaiian foliage and wildflowers, so that it resembled a garden in Krsna’s ideal forest abode, Vrndavana.

At the front of the float danced figures of Lord Caitanya and Lord Nityananda, who began the movement of congregational Hare Krsna chanting five hundred years ago in Bengal. Behind them, brightly dressed devotees enacted pastimes of Lord Krsna. Devotees in the center of the float sang Hare Krsna and played musical instruments. And atop the float, on a silk-cushioned, seven-petaled lotus, sat a life-size figure of Srila Prabhupada, who first brought Krsna consciousness to the West. Two dozen devotees pulled the float along the parade route with ropes.

Narahari dasa, president of Honolulu’s Hare Krsna center, explained the meaning of the Aloha Festival and the devotees’ participation in it: “As everyone knows, Hawaii is the Aloha State. In Hawaiian vernacular, this word aloha means ‘love.’ When one has great love and friendship for all mankind, he is said to have the ‘aloha spirit.’ The Aloha Festival celebrates this spirit by bringing together for a week of festivities the many ethnic groups that make up Hawaii’s population. As devotees of Krsna we felt right at home taking part, because we know that the real aloha spirit is realized when people from all walks of life join together in glorifying God. This is the very basis of the sankirtana movement, the movement of congregational chanting of the holy names of God.”

Quito, Ecuador—Alanatha Swami, representing the International Society for Krishna Consciousness (ISKCON), recently ended a week-long lecture series on the principles of spiritual life, given before the entire police force and police training crew of this Ecuadorian capital city.

The lectures, held at the request of Jaime Toran Pabon, Chief of Police Education, covered such topics as the value of religious principles in civic activity and practical programs for implementing moral and spiritual training on a national scale.

In a certificate of appreciation offered to ISKCON at the end of the series, Chief Pabon wrote, “Alanatha Swami helped us better understand the meaning of yoga and the Krsna religion and their great utility for social development. Such information should be known by all police officials if they are to best fulfill their calling. I wish to publicly applaud the devotees in general for their selfless spirit and Alanatha Swami in particular for his insightful lectures.”

In his summary remarks before the police department Alanatha Swami said, “Crime is not a phenomenon limited to fixed national or social circumstances. Crime pervades every culture where God consciousness is not at the center. Our purpose is to remind people that crime can never be decreased without the implementation of positive spiritual education.”

During the lecture series, Alanatha Swami describes, police officials were principally interested in devotional practices that supplanted drug use and inspired young people to a more moral, God-centered life. “There is no secret,” he says. “Krsna consciousness means leading a clean, healthy life based on knowledge of one’s relationship with God. Once that relationship is established, degrading material habits naturally fall away.”

ISKCON has functioned in Ecuador for the last three years. Projects of the Society there include a temple and restaurant in downtown Quito.