A Life of Purity and Purpose in Australia and New Zealand

In Australia and New Zealand

by Amogha Dasa and Visakha-Devi Dasi 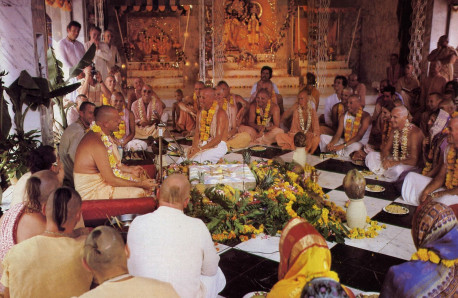 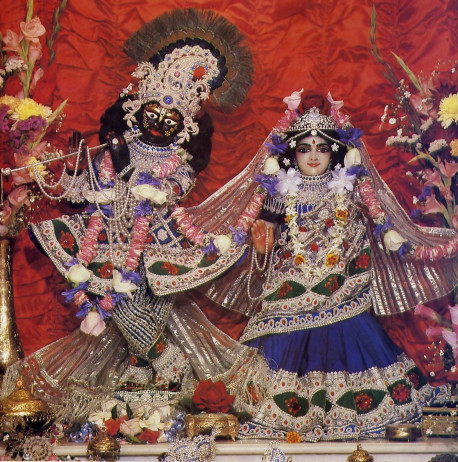 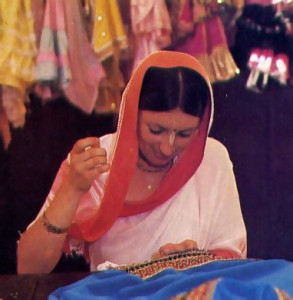 Krsna appears in His manifest form to accept service from His devotees, like the seamstress

On May 9, 1971, His Divine Grace A.C. Bhaktivedanta Swami Prabhupada stepped from an airliner at Sydney’s International Airport into Australian history. Thirty disciples of the seventy-four-year-old spiritual master of the Hare Krsna movement greeted him in their traditional robes with garlands of flowers and the chanting of Hare Krsna, Hare Krsna, Krsna Krsna, Hare Hare/ Hare Rama, Hare Rama, Rama Rama, Hare Hare, a practice that over the past year had become familiar to passersby on Sydney streets.

By June of 1974 the International Society for Krishna Consciousness (ISKCON) was recognized and registered by the federal government of Australia as a bona fide church. Several devotees became registered ministers of religion with the right to perform marriages as legal celebrants. 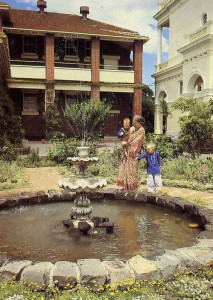 Today ISKCON in Australia and New Zealand includes four temples and three farms totaling more than 1,200 acres. It has opened four vegetarian restaurants, initiated two drug rehabilitation programs, and established the Ratha-yatra chariot festival as a much anticipated summer event. A historic building in downtown Melbourne serves as ISKCON’s Australian headquarters. The National Trust applauded the devotees for renovating the building (originally constructed in 1890) and especially commended them for the facade. The fifty devotees in the community conduct daily classes in the ancient Vedic literature, and hundreds of guests participate weekly in vegetarian feasts and seminars on bhakti-yoga (the yoga of devotion to God). 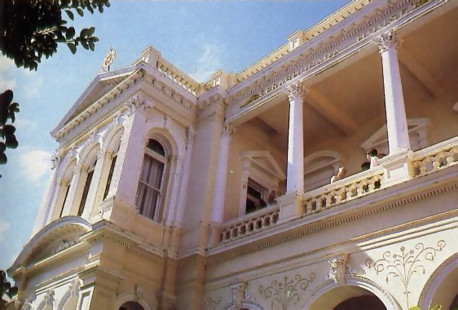 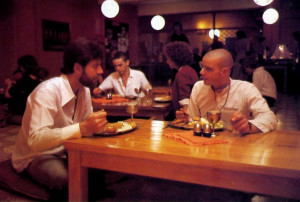 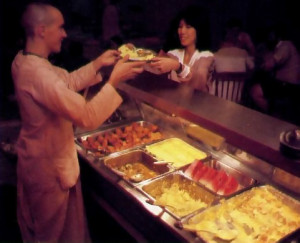 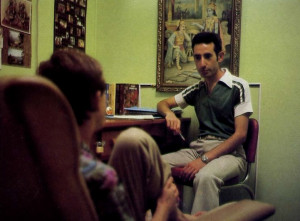 There is yet another ISKCON restaurant in Melbourne, but this one has a different theme. “Mukunda’s Drop-In” is in fact part of ISKCON’s drug rehabilitation program located in St. Kilda, a district of very heavy drug traffic. Doctors and government officials have praised the Drop-In program for its effectiveness. Dr. Fraser McDonald, Chief Medical Superintendent at Auckland’s Carrington Hospital, says, “Medicine as it has been practiced in the West concentrates far too much on the purely mechanical, physical aspects of healing. Little attention is paid to the psychological aspects, and absolutely no attention is given to the religious or spiritual part of a person’s being, for a variety of reasons. However, the result of this was that we at the Drug Clinic had to look around for people with expertise in a spiritual way of life so that we could offer this to our recovering drug addicts. And the Hare Krsna people gave us a warm welcome. We discovered that the combination of our medical care and the spiritual care from the Hare Krsna philosophy results in a very powerful tool indeed for the treatment of drug addiction, and for this we are very grateful.” 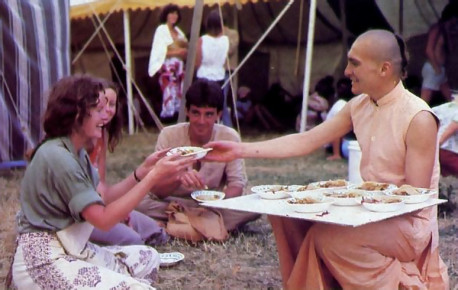 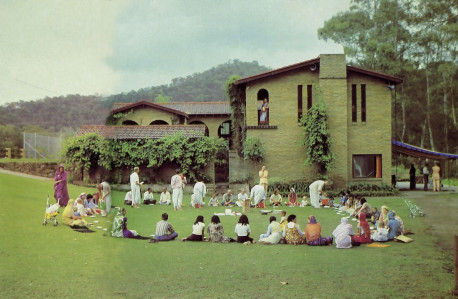 Guests and devotees share a noonday meal at Bhaktivedanta Ashram, an idyllic country retreat on the Colo River, near Windsor, N.S.W.

Devotees gather produce and flowers that will be offered to Krsna and then distributed to guests and residents of ISKCON’s farms.

The combination of a drug counseling center and restaurant has been most successful in King’s Cross, Sydney. Here Mukunda’s Drop-In receives hundreds of people daily who aspire to live a purer life, free from drugs and other unwanted habits. Mukunda’s manager is Vasusrestha dasa. “At a drug rehabilitation course,” he says, “we were told there is no known cure for drug addiction. I think the program at Mukunda’s has proven them wrong. Krsna consciousness provides not only a way to quit drugs—a healthy diet, personal spiritual guidance, and the chanting of Hare Krsna—but also motivation to stay off drugs permanently. By learning how the soul within the body is eternal, a drug addict begins to see himself in a more dignified way. Rather than feeling like a recipient of charity, a person who comes to Mukunda’s develops a spiritual vision of himself and the world.” 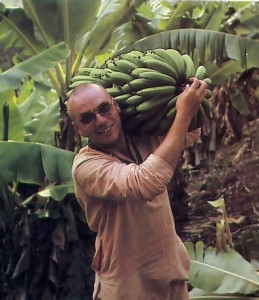 “The bhakti-yoga program the devotees offer is the best thing I’ve come across,” comments Jim Scarano, Mukunda’s drug counselor, a psychologist who earned his degree from MacQuarie University in Sydney. “Most programs try merely to return one to a ‘normal’ level of communication with society. But bhakti-yoga teaches him to respect himself spiritually and to see that progress doesn’t end with getting a job or blending with the mainstream of society. More than one hundred people dine here every day. Many become vegetarian, and the number who come off drugs is startling. There is so much to indicate the effectiveness of the program.” 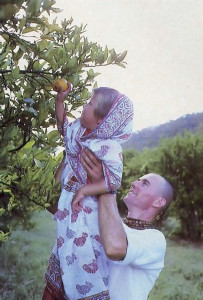 For those who want to learn more about the ISKCON programs and principles, the devotees provide guest, rooms at the Bhaktivedanta Ashram, a 113-acre farm at Colo, near Windsor, N.S.W. The Colo River flows by one boundary of the farm, nourishing the four hundred mandarin and other assorted fruit trees and vegetable gardens that grow there.

“ISKCON is dedicated to showing people how to live a simple, happy, God conscious life,” explains Prabhupada-krpa Goswami, who oversees the numerous ISKCON projects in Australasia. “Before Srila Prabhupada passed away, he said he had established half of his work—millions of Krsna conscious books were being printed and distributed—so now the Krsna conscious farming communities should be developed. Our city temples introduce people to Krsna philosophy, and now people can come to our farms and see how one should live in a simple, self-sufficient, God conscious manner. 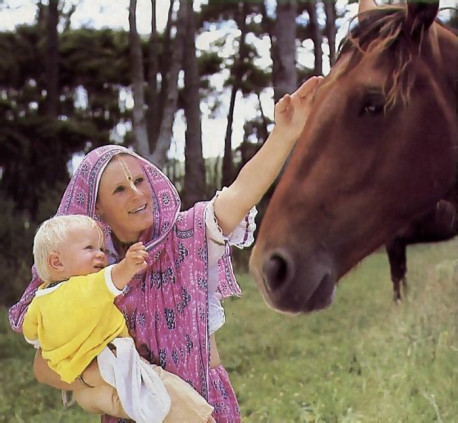 Oxen and horses serve as natural replacements for much energy wasting machinery. 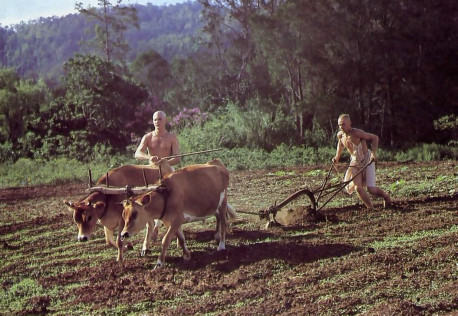 With its 113 acres of farmland. orchards. and vegetable gardens. the natural and richly spiritual atmosphere provides a perfect setting for a commitment to a pure life.

“Nowadays the millions living in the cities depend on a handful in the country—those who do the farming,” Prabhupada-krpa Goswami explains. “But as long as food production relies on a few farmers dependent on machinery and oil, the position is precarious. Krsna consciousness teaches that the gift of human intelligence should be used to reduce our material entanglements and assure real self-fulfillment. That means a simple, basically agrarian way of life. Srila Prabhupada gave us a four-point program for our farms: ‘Grow your own food, build your own homes, make your own cloth, and grow your own medicines.’ And whatever we do, we do as an offering to Lord Krsna. This is natural life, the way human beings were meant to live and become happy.” 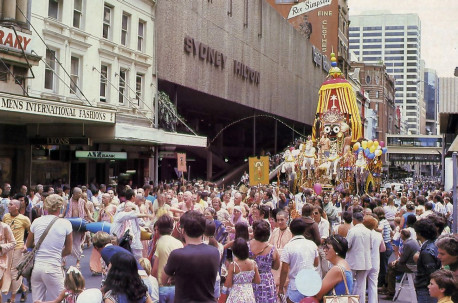 Downtown Sydney welcomes Krsna’s chariot for a festival thousands of years old. Devotees serve a sumptuous feast to all at the end of the parade 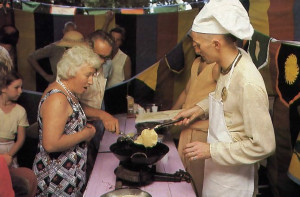 Nestled at the foot of Mount Warning, seventy-five miles south of Brisbane, is ISKCON’s New Govardhana Farm, a thousand acres of mango trees, papayas, pineapples, apples, oranges, lemons, bananas, guavas, plums, avocados, and an equally rich variety of vegetables. “If three hundred people came here tomorrow, there would be work for all of them,” says Sabhapati dasa, president of the farm. “Nearly half a million Australians receive government aid for unemployment. Here’s a practical solution. We’re planting orchards and building houses and temples, a school, guest accommodations… enough work for everybody.” 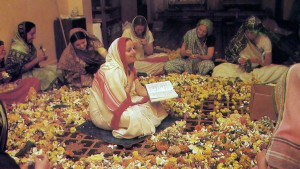 Devotees prepare hundreds of garlands for ISKCON’s Festival of the Chariots.

Another ISKCON farm is New Varshana, 100 acres situated just outside Auckland, New Zealand. In New Zealand a recent poll found that the number-one national pastime is reading. So the devotees here are finding a wide and favorable acceptance of Krsna consciousness. In a land where industrialization has come gently, New Varshana, which emphasizes independence from modern technology and reliance on a God-centered relationship with the environment, has proved a centerpoint of attraction for hundreds of visitors from many varied walks of life. 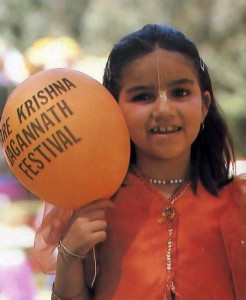 An annual event honoring Krsna as Jagannatha. Lord of the Universe.

“The farms don’t offer the sensual trappings of city life,” says Hari Sauri, “but what they do offer is so much more satisfying that our communities are expanding rapidly. It’s not just a question of living in the country. It’s being in a situation which permits one to develop an appreciation for God and one’s relationship with Him. Without the higher taste of chanting Hare Krsna and cultivating God consciousness, village life alone will not satisfy anyone. 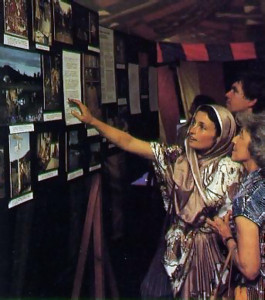 Above, a festival-goer learns of ISKCON’s farm projects at one of several photo displays.

“The same principle applies to drug rehabilitation. So many groups do drug rehabilitation. They also feed people and give them counseling. But on the whole they fail to cure people of their addictions, because they don’t know the actual purpose of life. All they can offer is a place in materialistic society, where one still ends up losing everything at death. 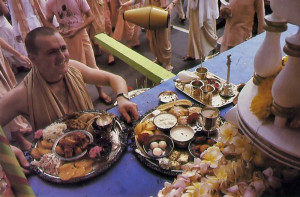 A devotee offers the first plates to Lord Krsna

“But in Krsna consciousness we give a person a positive alternative which lifts him completely from degrading materialistic activity. When he learns a little of the philosophy of Bhagavad-gita he understands who he is and the goal of his life. Then we offer him a program of practical work. As he works for Krsna, all bad habits fall away. Many people actually want to lead a pure life, and Krsna consciousness shows them how. The real disease is ignorance of our true spiritual identity and our relationship with Krsna, or God. Once that is cured, all other diseases fade quickly away.”