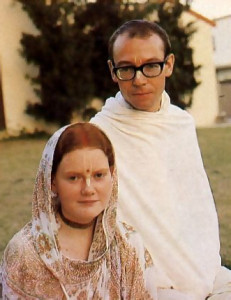 Los Angeles (AP)—Recently a federal judge approved a settlement awarding the International Society for Krishna Consciousness and one of its members $ 10,000 and court costs in a deprogramming case.

U.S. District Court Judge David Williams signed the order ending a case that began more than three years ago when Madonna Slavin Walford, a Hare Krishna devotee, was abducted from her parents’ home in Arcadia, California, and driven to Northern California for a deprogramming.

After the settlement Mrs. Walford said, “I appeal to Americans everywhere, and particularly to parents of Hare Krishna devotees throughout this nation, to understand that this is not a cult. I am practicing a religion that is more than five thousand years old, a religion whose book of truth, the Bhagavad-gita, is sacred to more than six hundred million people on this planet.”

Melbourne—Many prominent figures in the religious and academic fields in Australia have appreciated the Hare Krsna movement and have strongly affirmed its historical and religious authenticity, as well as its contribution to the intellectual, social, and cultural life of contemporary Australia. The following are samples of their appreciations.

“The Hare Krsna movement is a genuine representative of one of the well-known schools of Indian personal theism. The literature of the movement, especially the works of the founder, Srila Prabhupada, are scholarly translations and expositions of that tradition. It is thus unfortunate that the general public tends to lump together all unusual religious movements as “cults” thus judging the Hare Krsna movement on the same level as, for example, the Moonies, the Scientologists. Jim Jones’ tragic ‘People’s Temple,’ or the Ananda Marg. The followers of the Hare Krsna movement, on the contrary, should be regarded as genuine missionaries of a genuine and well-authenticated Hindu tradition.

“The Hare Krsna movement demands and receives from its devotees extremely high moral standards, for example in the areas of sex, drugs, and alcohol. Indeed, a considerable part of the attraction of the movement lies in the fact that it encourages a simplicity and self-discipline of life-style which appeals to many fine young people who are in revolt against the extravagance of the society in which they live.

“I myself spent twenty years as a Christian missionary in India. I know what it is like to witness to one’s faith in a different cultural environment. As one who enjoyed religious freedom in India, I feel it is essential that we in Australia should ensure similar freedom to people of all faiths. It is very important for the freedom of religion, not only in Australia but in India and elsewhere, that no legislation should be passed which might infringe this liberty. The success of the Hare Krsna movement in the Western world is a challenge to Christians to listen, to understand, to learn, and then to reexamine their own faith. To react by encouraging repressive legislation would be a denial of the liberty which we claim for ourselves, and which we must share with others.”—The Reverend Dr. Robin H.S. Boyd (Former Presbyter, Church of North India: Minister, Uniting Church of Australia)

“As a professional teacher of Asian civilizations and religious movements, I have been impressed, like many other Indologists, by the sincerity and devotion of your movement in Australia. It is doubtless a beautiful transplantation of an ancient ideal of clean moral living, vegetarianism, devotional worship (bhakti), celibacy, and the study of scriptures. It appears to be in perfect conformity with the cultural and religious practices of age-old Vaisnavite Hinduism. Yours is a movement which is open and catholic and devoid of frenzy and fanaticism, aggression and violence. I wish your movement all success and peaceful coexistence with everyone else in Australia.”—Dr. S.D. Singh (Department of History. University of Queensland).

“The Hare Krsna devotees are followers of a legitimate and ancient religion. I have quite some experience of Christian religious communities and can thus affirm that all that is best in Christian monastic virtues was present in the Melbourne headquarters of the Hare Krsna movement, which I personally visited. There is no Christian doctrine which would deny holiness and sanctity to members of other religions, and holiness was certainly there in the Krsna community, as was happiness and humanity. The request I would want to make of my fellow Christians is not to lump the Hare Krsnas into what we Australians would call ‘The Ratbag Element’ (translation: those who are fanatical and monomaniacal about an outlandish set of beliefs). The reason I would give for that request is the simplest one in the world—that is a category in which the Hare Krsnas definitely do not belong.”—The Reverend Fr. Ian N. Hunter, M.Th. (Anglican priest: Chaplain, Royal Melbourne Institute of Technology)

“I believe that the Hare Krsna movement is here to stay, and will have an influence far beyond its actual membership in the years to come, making for gentleness in human relationships and faith in the fundamental goodness of the world in days of increasing tensions, in both social and individual life. I am glad that you are bringing Krsna consciousness to the Western world, for it cannot but grow spiritually richer from what you are doing. As a human being, I must applaud the fact that your movement is bringing faith and joy back into the lives of many young people who have not been able to find those virtues in the religion and culture in which they were raised, and I wish you success in the good work you are doing.”—Dr. A.L. Basham (Professor and Head. Department of Asian Civilizations. The Australian National University, Canberra)