Back to Godhead > ~Featured~ > How a Krsna Conscious Woman Achieved Liberation

A queen of Vedic India found freedom in dependence. 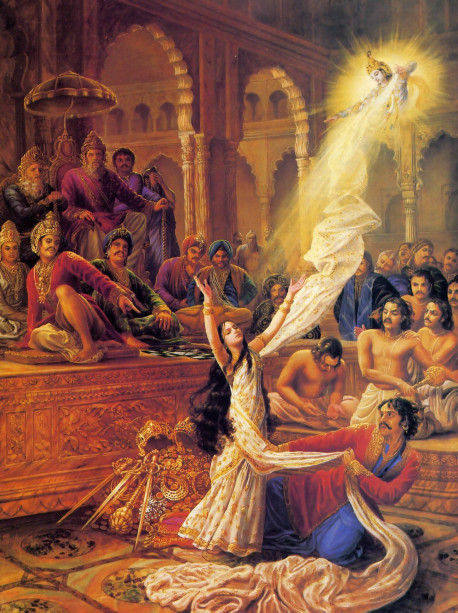 Recently I was reading one of the many new books by women who feel they should make their miserable plight known to the world. The book read like a horror story. It told how nuptial love becomes a nightmare of neglect and abuse, how simple children become savage villains, how civilization turns a deaf ear to women’s desperate pleas. Still, the story had something of a happy ending. The author joined a women’s liberation group, and she is now a liberated divorcee working for the ratification of the Equal Rights Amendment.

Although I truly believe that the author suffered—and that countless other women are suffering in one way or another—I couldn’t help reflecting on the life of one woman in history who countered her misery with a more realistic remedy than ERA.

Draupadi was the daughter of a provincial king in what is now India. When Draupadi was little more than a child, her father arranged a wedding contest. Whoever could shoot an arrow through the eye of a fish suspended high above by looking at the fish’s reflection down below in a pool of water could have the king’s daughter. But the best archer was a man Draupadi detested, so at the last moment she insisted that one of the rules be changed so that this man would be disqualified. Ultimately she was won by the prince Arjuna, but since Arjuna was obliged to share everything he had with his four brothers, Draupadi became the wife of all of the five Pandava princes. Whatever pain and pleasure we experience in establishing a marital relationship, Draupadi experienced fivefold.

Of course, the Pandavas were not ordinary husbands. Each in his own right was godly, and since Draupadi was a princess, each of her husbands gave her the care that was her due. But there was a time when they failed to meet her expectations, and her subsequent plight was unbearable.

The eldest Pandava brother, Yudhisthira, was forced into an unfair dice game with his vicious cousin Duryodhana, who was challenging him for the right to the kingly throne. The stakes were high, and in the course of the game Yudhisthira lost his wealth, his kingdom, his palaces, and ultimately his throne. With nothing else left, in the last game he bet Draupadi, his beautiful wife, as though she were an expendable piece of property. As if this were not insulting enough, he lost her in the game. Draupadi became the property of the vicious cousin.

Duryodhana immediately sent his brother to Draupadi’s chambers. The man grabbed the princess by her long black hair and dragged her into the assembly, where her husbands sat humiliated. She wept and pleaded for her husbands to protect her. When they turned their faces down in hopelessness, she cried out to the others in the assembly. The brother of Duryodhana began to take off the royal garments that covered her. He was going to disrobe her in public, and no one was going to help her.

Now, let’s try to see this incident in the light of today’s culture. Our modern-day beauties don’t mind at all standing naked in front of the whole world. It seems their beauty is shallow; they have found no deeper meaning in life than playing up to the animal instincts of equally shallow men. Draupadi was physically beautiful, but more, she was noble, queenly, almost divine. She was sweet and chaste, beautiful and intelligent, though at times full of the fire of her noble birth. She was a pinnacle of femininity in a culture that (generally) respected women. This kind of mistreatment would usually not have been tolerated by even the lower classes, let alone the kingly order.

Draupadi called out to the assembly of kings and princes, “If you have ever loved and revered the mothers who bore you and nursed you, if the honor of wife or sister or daughter has ever been dear to you, if you believe in God and dharma [His laws], forsake me not in this horror more cruel than death.”

Yes, death would have been more tolerable than this insult. Under normal circumstances, a man would have been killed for so much as touching a princess, especially in the presence of her husband. But here she was—being dragged by her hair and forcibly undressed—and no one was going to save her. Of course, there was a reason why her husbands didn’t protect her, but that is another story. The fact is that at this point in her life, she was abandoned while facing a danger worse than death.

If Draupadi were to face the same crisis today, she would have a number of alternatives. She could issue a couple of well-placed karate kicks or shoot her attacker with a hand gun. She could claim that on the basis of ERA, she should not be treated as a second-class citizen. She could threaten to sue the aggressor for assault and the assembly hall proprietors for insufficient protection. If none of these tactics worked, afterward she could write a book on the experience, and with her royalties she could start her own women’s liberation force.

But fortunately for Draupadi, she did not have all these complicated, mundane, if not useless, options. When she saw that no one in the hall was going to help her, she gave up all attempts to protect herself, and with upraised hands she cried, “O Krsna, Lord of the world, God whom I adore and trust, abandon me not in this dire plight. You are my sole refuge. Please protect me.”

As the brother of Duryodhana was pulling off Draupadi’s royal sari, Krsna continued supplying an unlimited length of cloth to cover her. Her attacker pulled and pulled until he built a mound of cloth, but still Draupadi remained covered. At last the man admitted defeat, and Draupadi was released.

This is a classic example of genuine women’s liberation. Draupadi was a perfect, chaste wife, an ideal example of womanhood. And beyond this, she was an intelligent devotee of Krsna. She had sought protection from her husbands; failing that, she had turned to the larger social body for help. But ultimately she was protected not by any material arrangement. She was personally liberated by Krsna Himself.

Now the world is full of men far worse than Duryodhana. Tormented women are crying out for help. Out of foolishness and desperation they are accepting the empty promises of ERA. But the independence it offers is artificial; it has no substance. Legislation cannot change nature, and by nature we are all inescapably dependent on each other. Sometimes, in our interdependence, we can exploit, and sometimes we are exploited. Sometimes we are treated fairly, and sometimes not. But at no time does independence, freedom, or equality rest in our hands.

Of course, this doesn’t mean we should give up trying to protect ourselves, trying to right the wrongs of an inequitable society. (I have been in a number of places, from the jungle villages of Bengal to the streets of New York, where I wished my karate were in better shape.) Surely we should use the machinery of democracy to help the exploited minorities. We can follow Draupadi’s example. We can appeal for the help of the greater social body; we can use our intelligence to fight for the cause of just government. But ultimately, we have to raise our hands in the air and cry out—not simply for independence from an exploitative world, but for full dependence on Krsna, the bestower of liberation.