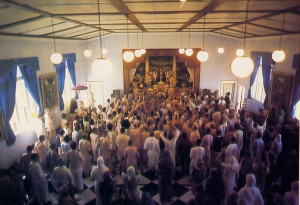 Laguna Beach, California—Some three hundred devotees from the American West Coast recently celebrated the opening of the new Hare Krsna temple in this southern California oceanside town. With colorful ceremonies, they installed five-foot-high Deity forms of Lord Caitanya Mahaprabhu (Lord Krsna’s incarnation for the present age) and His four principal associates. These are the first such Deities in the continental United States. (They appear on the cover of this month’s BACK TO GODHEAD.) The celebrations included a procession through the main streets of the city and a bountiful vegetarian feast for guests and devotees alike.

“We want this temple to be known as a place of pilgrimage for devotees of Lord Krsna and as a site of ecstatic festivals for the people of this town,” said Srila Ramesvara Swami, who oversees the programs of the Hare Krsna movement in the American Southwest. The Hare Krsna devotees have had a small center in Laguna Beach for ten years.

The opening of the new temple represents a victory for the Hare Krsna devotees in a controversy that began when they acquired the building in 1977. City officials had contended that the new property, formerly a Christian church, was no longer zoned for religious use. But after some advice from the city attorney, the city council changed its mind and allowed renovation to proceed. Devotee carpenters and builders then transformed the abandoned church into a showpiece for Krsna consciousness. 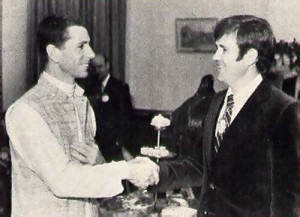 South Melbourne, Australia—The Krsna consciousness movement has won official accolades for a banquet it catered at Town Hall for the Mayor, the local State Member of Parliament, five other mayors, and thirty-five other guests.

“I wish to convey my thanks for the outstanding catering done by the ISKCON team at my reception.

“Two years ago, I was horrified to learn from my eldest son that he had partaken of some food prepared by the International Society for Krishna Consciousness. After further discussion, however, and an assurance that he had not been drugged or poisoned, I was happy to learn that he had actually acquired some ideas on food science.

“Thanks to your magazine and the benefit of discussion with you, I no longer have the prejudice caused by superstition and lack of knowledge.

“I received a great deal of pleasure in bringing to the attention of my guests that the attractive display of food was prepared without the use of any meat, fish or eggs.

“I look forward to obtaining your services on a future occasion.