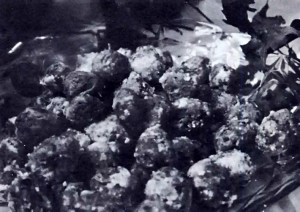 Melt butter in frying pan. Add a very small pinch of camphor and stir. Add coconut and fry over low heat, stirring constantly till coconut is light brown. Mix in figs and walnuts. Mix in honey and set aside. When cool fold in cream cheese and cottage cheese. Roll mixture into little balls and refrigerate overnight. Makes about 72.

Mix all dry ingredients thoroughly. Mix in water to make a thick dough. Heat oil in large 2-qt. sauce pan. Just before oil begins to smoke squeeze some of the dough through a ricer into the hot oil. Cook for about 5 minutes. Noodles should be a very light brown color. Repeat this process until all the dough is used up. Makes a large bowl of noodles.

Make massala by mixing dry ingredients together in a cup. Break cauliflower into large thumb-sized chunks. In 1 qt. of water add turmeric. Boil cauliflower in the turmeric water until tender, but NOT mushy. Drain and allow to cool. In a separate bowl, mix together chick-pea flour, baking soda, salt, and massala. Add enough water to make a thick batter. Beat batter for two minutes. Heat 2 qts. oil in large heavy pot or deep fryer until smoking. Dip pieces of cauliflower into batter, coating them completely. Allow excess batter to drip off. Carefully and gently place these in the hot oil and turn to cook all around. Pakora is done when it is hard. Hardness may be tested by tapping one to see if it is firm. Remove to drain on paper towel. Makes about 40-50.

Heat 1 quart of oil in a frying pan. Place popper into oil making sure it submerges completely. Poppers take about 3 seconds to cook. Remove immediately with tongs. Popper will expand to about twice original size. Let excess oil drip off.

Poppers, known also as poppadam, or paparh, may be purchased at most Oriental spice shops, or Krishna Consciousness temples in New York, Los Angeles and San Francisco.

This year instead of the usual holiday treats, you can enjoy a few of the very special dishes we students of Krishna Conscious Yoga prepare on feast days in our kitchens. First, the delicate flavor of Coconut Honey Balls will fill your mouth with bliss and leave a clean refreshing aftertaste besides. Next, when you’re relaxing, try a few handfuls of Choody Noodles. These crunchy little morsels can be the hit of your holiday season. The famous “tempoura” of Japan actually originated in India as Pakora. Be careful to make a liberal portion of this dish. You’ll understand why with the first bite. Poppers, our final treat, are the fastest cooking preparation in the world. They’re completely done in about three seconds, which is how quickly your guests will want to eat them, once they get a taste. Remember, all these foods are made entirely with vegetable products.