Back to Godhead > ISKCON > Temples > “Krishna Temple Is Labor of Love”

“Krishna Temple Is Labor of Love” 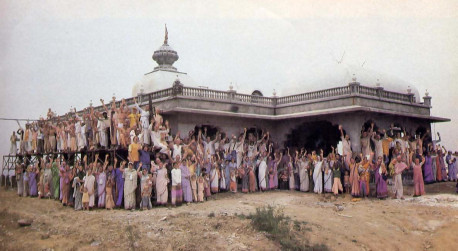 Prabhupada’s Palace honors the memory of Srila Prabhupada, the Krishna movement’ s founder and spiritual preceptor, shown here on his last visit, in 1976.

Something of a minor marvel is taking shape in the hills of Marshall County, where members of the Hare Krishna religious community have sacrificed over the past four years to complete a “labor of love”—a temple in honor of their spiritual master.

Formally named Prabhupada’s Palace, after His Divine Grace Bhaktivedanta Swami Prabhupada, the temple will be known to those who visit it as the Marble Temple, complete with formal gardens and incorporating more than 50 kinds of imported marble.

The temple sits atop a hill near the rural community of Limestone, midway between Cameron and Moundsville. The site was a garbage dump four years ago when members of the sect began their project. Today, with yet another year of work remaining before completion, the temple and grounds afford a striking view of the surrounding hills and valleys.

Visually, the temple is stunning. Designed in the Jaipur style of Indian architecture, it features arched doorways, brass and copper balustrades, and marble inlays in intricate and delicate patterns, all constructed by Hare Krishna devotees. 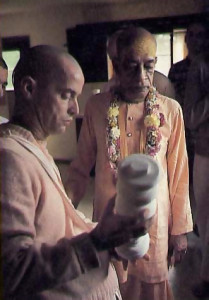 In foreground is His Holiness Kinanananda Swami, the leader of West Virginia’s Hare Krishna farm community.

According to Swami Kirtanananda, a leader of the religious sect, the temple and grounds occupy about 50 acres of the 1,500-acre community. Landscaping will begin this fall, he said, with a final goal of including several fountains and a reflecting pool into the design of the grounds.

As much as the architectural style differs from the local style, so do the construction workers themselves. Absent are the hardhats and salty language commonly associated with any construction site, and in their stead are the quiet attitudes and robed figures of Hare Krishna devotees.

Every aspect of construction and design was undertaken by the devotees, some traveling to India to learn the detail of Jaipur architecture from some of the finest craftsmen. Others traveled the world in search of the finest marbles from Italy, Iran, Canada, and other spots.

The time invested on the temple can best be realized by Kirtanananda’s example that it takes two months to complete one of the marble-inlaid panels used on the temple interior. Ten panels are needed for one room alone. The plaster casts for the temple doors are intricately hand-carved and take over one month to prepare. 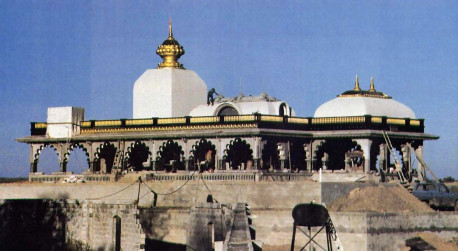 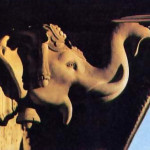 The temple is crowned with towers and spires; the dome to the highest tower will be capped with gold, Kirtanananda said. 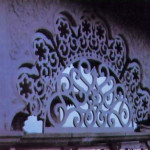 The temple is the only one of its kind in the United States, Kirtanananda said, and already nearly 50 people visit the temple daily. Members of the sect hold worship services there twice daily, in keeping with the regimens of their faith. 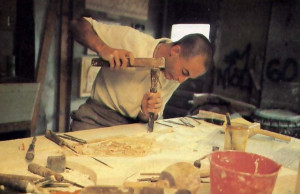 The plaster casts for the doors are intricately handcarved and take over a month to prepare. Absent are the hard hats and salty language commonly associated with any construction site, and in their stead are the quiet attitudes of the Hare Krishna devotees.

In addition to work at the temple grounds, devotees have begun work on a new access road to the temple, one that provides several beautiful views, prompting some visiters to comment that the temple looks as though it had “descended” from above, Kirtanananda said.

Perched on a hilltop with the blue skies of the Ohio Valley as a background, the temple is reminiscent of the residences of kings and deities told of in old mythologies. 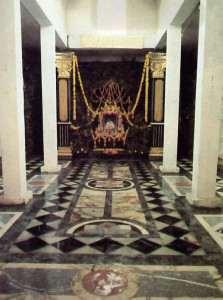 The Image of ancient grandeurs. Hare Krishna devotees have done all the marble inlays, in intricate and delicate patterns. It takes two months to complete one marbleinlaid panel, and ten panels are needed for one room alone.

The image of ancient grandeurs is continued in the marble inlays, as colors of red, blue, green, and gold mix and play in a man-made design that compares adequately with the grandiose veining in the marble provided by nature. 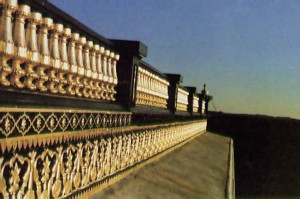 tasteful patterns in teak
and metal

This exotic beauty will be continued in the main sanctuary ceilings, whereupon will be hand-painted pastimes of Krishna, according to Kirtanananda.

Only a handful of the community’s 200 members work on the temple at any one time. The remaining members are involved in ensuring the continued self-sustenance of the community, which was founded in 1968.

Because of the community’s standing as a nonprofit, tax-exempt organization, the cost of the project has been greatly reduced. However, Kirtanananda confided that several million dollars would have been invested had the temple been built by a commercial interest. 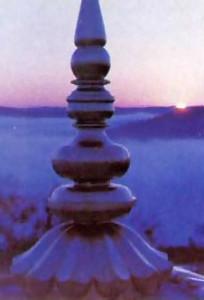 The community is primarily supported through the sale of its books, although some support does come from residents of surrounding communities and several area businessmen. However, in the community, Kirtanananda said, the concentration is on personal fulfillment through love, although he said the community is very much like any secular community in other aspects.

Visitors are welcome to visit the grounds, located near U.S. 250, from 8 a.m. until 6 p.m. daily. Kirtanananda expects the number of visitors to grow following the temple’s completion sometime next summer.

Meanwhile, the Marble Temple is still something at which to marvel.

On August 16, 1979, the devotees will dedicate the completed temple (artist’s rendering below) and commemorate the day, in 1896, when Srila Prabhupada made his appearance in the world.

On August 16, 1979, the devotees will dedicate the completed temple (artist ‘s rendering below) and commemorate the day, in 1896, when Srila Prabhupada made his appearance in the world.