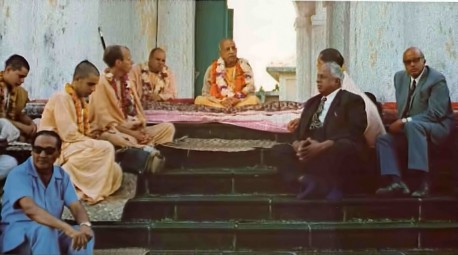 Srila Prabhupada and his disciples meet with Mr. Gungab and Mr. Teelock.

A recent tour of Africa took His Divine Grace A.C. Bhaktivedanta Swami Prabhupada through East and South Africa, and to the island state of Mauritius, six hundred miles off the coast of Madagascar. There he spoke with many people, among them Mr. Khemraj Gungah, president of the Narmadesvara Sivalaya temple in Rose Bell, and Mr. Gautum Teelock, exParliamentary Secretary in the Ministry of Agriculture. Contrasting ancient Vedic culture with modern civilization, His Divine Grace noted:

“Vedic society is based on the principle of love—between husband and wife, father and son, the king and the citizens, and so on. Civilization must be founded on love, not law. By law you cannot make a person love you. First he must love you, then he will gladly follow your law.

“Modern civilization lacks this basis of love, so everything is superficial and false. But if devotion to Krishna [God] is made the basic principle, then people will be happy.”

Knowing of local plans to reorganize social and political structures, Srila Prabhupada then proposed that an ideal state based on the instructions of Bhagavad-gita be set up in Mauritius. “People will be very inclined to it,” he said. “In a big state—especially a highly industrialized one—it would not be possible, but in a small state like Mauritius you can make it happen. You wouldn’t be making a new experiment. This experiment has already been made and proven successful. In Vedic days, people lived strictly according to the principles summarized by Krishna in the Bhagavad-gita. They made the test and proved that the principles are true. So you just have to follow what is already there. You simply have to accept the Vedic authority.”

Returning from a ten-week tour of Latin America, His Holiness Hrdayananda dasa Gosvami, director of ISKCON’s activities in that part of the world, reported that the Krishna consciousness movement is flourishing there. “We’re even distributing Srila Prabhupada’s books in the middle of the Amazon jungle,” he said. He went on to describe how a small party of devotees rode a jungle boat up the Amazon river to the city of Manaus in the interior of Brazil. They stayed there for one week, distributing literature and giving talks on Krishna consciousness.

Elsewhere in Brazil, thirty devotees transformed a large house in the modern city of Sao Paulo into a gracious temple. They’re looking forward to touring the country in a newly acquired bus to distribute the forthcoming Portuguese-language Sri Isopanisad, Srimad-Bhagavatam, and Bhagavad-gita. Another new facility is a beautiful fifty-acre farm about one hundred miles north of Rio de Janeiro.

And in Trinidad, the devotees went to court after the police tried to stop their public chanting of Hare Krishna. The verdict? “Why are you bothering these respectable young men and women?” the judge asked the police. “Let them go on with their work. They’re doing good.”