Back to Godhead > Devotees > Acharyas > Humility by Srila Bhaktivinoda Thakura

A poem translated from Saranagati,
a book of Bengali poetry by
Bhaktivinoda Thakura (1838-1914) 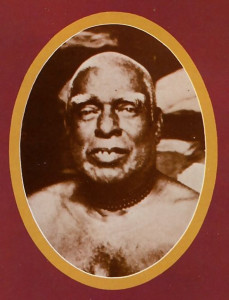 I forsook You, O Lord,
And came to this world of pain and sorrow.
Now I submit my tale of woe
At Your lotus feet.

While still in the unbearable fetters
Of my mother’s womb,
I saw You before me.
You revealed Yourself but briefly
And then abandoned this poor servant of Yours.

At that moment I swore to worship You
After taking birth.
But birth came, and with it
The network of worldly illusion,
Which robbed me of all good sense.
As a fondled son in the lap of relatives,
I passed my time smiling and laughing.
My parents’ affection helped me forget
The pangs of birth,
And I thought the world a very pleasant place.

Day by day I grew
And soon began playing with other boys.
Before long my powers of intellect emerged,
And I studied my lessons incessantly.

Travelling from place to place,
Proud of my education,
I grew wealthy and maintained my family
With undivided attention.

Now, in old age,
I, Bhaktivinoda, weep sadly.
I failed to worship You, O Lord,
And instead passed my life in vain.

What will my fate be now ?

Kedarnatha Datta Bhaktivinoda led a life of devotion to Sri Krsna, the Supreme Personality of Godhead. He wrote nearly one hundred books on the science of bhakti-yoga (devotional service to the Supreme Lord), established several major places of pilgrimage, checked the rampant growth of unauthorized, pseudodevotional practices across India, and paved the way for the transmission of Krsna consciousness to Western shores.

Despite numerous titles and responsibilities—court magistrate in the city of Puri, manager of the huge Jagannatha temple, husband, and father of thirteen children—Bhaktivinoda Thakura remained throughout his life dedicated to reviving the movement of devotion to Sri Krsna begun in the late fifteenth century by Sri Caitanya Mahaprabhu. In his poetry, the Thakura reveals this dedication through verses filled with the humility and philosophical insights of a pure devotee of God.

The word saranagati means “complete surrender to the Supreme Lord”. In this poem Bhaktivinoda Thakura describes the journey of the conditioned soul from birth and entanglement in the false promises of material affection, to liberation in saranagati. He humble takes on the role of the subject of this journey, which begins with the decision to leave the eternal spiritual world and pursue the fleeting pleasures of material life. As a yet unborn child in the womb, the conditioned soul realizes his error and vows to again take up devotional practices. But the shock of birth wipes out all memory of this vow, and the should finds himself progressively entangled in family affairs, mundane education, marriage and wealth.

The poem ends with Bhaktivinoda lamenting the loss of his loving relationship with Lord Krsna and contemplating the consequences he must now face, namely rebirth in another material body.