Back to Godhead > ISKCON > News > Govinda’s Restaurant in Tehran 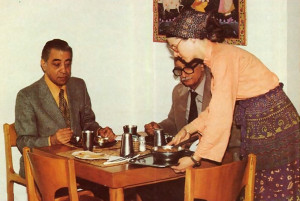 “Down to Earth and Up to God”

Under the direction of Atreya Rsi dasa, who oversees the activities of the Krsna consciousness movement in the Middle East, devotees of Lord Krsna have for several years maintained a temple in Tehran. Two years before the 1979 revolution they opened a vegetarian restaurant in downtown Tehran, and later they purchased a five-acre farm outside the city. The farm provides fruits, grains, and vegetables for the restaurant and also for a food cart that every day serves hundreds of customers the popular Iranian lunch of bread and lubia (a native bean preparation).

Through months of political turmoil, the devotees continued their distribution of sanctified food ‘prasadam’ and their work of propagating love of God according to the teachings of the Bhagavad-gita. Under the guidance of Sivananda Sena dasa, the Iranian branch of the Bhaktivedanta Book Trust published several books, including Sri Isopanisad, in Farsi.

What follows is a condensation of an article that appeared recently in the Tehran Times, Iran’s leading English-language newspaper.

The fundamental principle of living well in God’s faith underlies the activity of a truly unique restaurant in Tehran, where the material offerings are as fine as they can be found anywhere, yet with an extra goodness provided by the content of spiritual devotion which is placed in them.

As the devout Moslem prepares his or her food with a “bismillah,” and eats equally with the same reflection that one’s action is a service to keep the body going in order to serve God more fully, so the cuisine of Govinda, the Vedic vegetarian restaurant, is prepared with faith and love and “zekr” (remembrance of the Divine) and dished out with the same devotion.

The restaurant is called “Vedic” because its food is chosen and cooked according to the scripture, the rules of devotional cleanliness, of the path of the Vedas. Thus it is vegetarian not in the modern faddish way, to please a fashionable fancy, but as an article of faith. That not even an egg is broken in this totally meatless diet is due to attention to the profoundest laws of human health—and eating pleasure!

The meal is called “prasadam,” meaning “an offering to God,” food which has been prepared as a devotional service to the one who provided the materials from which the succulent recipes are put together. And since the spiritual content is in order, you can be sure that the material substance is eminently satisfying as well!

It goes without saying that the breads, along with everything else, are prepared on the premises of this down-to-earth and up-to-God institution. No stimulants are served, so that the tea of recent custom is replaced by the healthy drinks which Iranians used to savor before foreigners commercialized them into becoming customers for imported tea.

Much of the fresh fruits and vegetables used at Govinda restaurant is home-grown on a 2-acre farm near Karaj which belongs to and is tended by the community that runs Govinda, adherents to the Krishna Consciousness spiritual path, focused on a life in God.

Just as the cooking and maintenance of the restaurant form devotional services, so working the farm, with all its complexities and responsibilities, is part of the daily living requirement of cultivating nearness to God. “Those who do not unfairly take advantage of nature,” said one devotee, “and who depend on God, will enjoy the food He provides.”

For the efforts, not only physical but devotional, which the believer puts into his work, the response—as the Qoran, the Bible, the Vedas and all the other great scriptures of the world state—will be many-fold. “Nature will respond,” said another, devotee, “with its treasure of crops.”

Apples, plums and pears all grace the trees of the orchard at the farm, while the fields in season abound with tomatoes, lettuce, beets, carrots and everything the earth produces in profusion when hard work and faith are brought to bear.

“If God is satisfied,” said a third devotee, “we will automatically be satisfied, since He is the source of everything and we are part and parcel of Him.”

Another devotee added, “Everything existing on earth belongs to God, so it should be used only to satisfy God. Our gratitude for his fruits only makes us want to worship Him more. God is real, and when you revive your relationship with Him, He reciprocates and responds.”

This understanding of the reality of God is the vital motivating force behind the miracle of Govinda, the restaurant which seems always to provide, because it is, as the devotees see it, no less than an instrument of faith in action.

While the restaurant is in its fifth year, the farm is only in its second. It was acquired and developed after the Revolution, and the process of developing it has been, as it were, a “spiritually revolutionary” one, where numbers of dead and unproductive old trees were rooted out to make room for the burgeoning new orchards and fields.

A further revolution which the community has wrought on its modest few acres is to change the production relations. “Before,” says Bharga, the devotee who is responsible for financial and managerial matters, “the farm was run by an owner who was boss of a team of workers. It was run on material terms, the products being marketed for profit to the owner. Now the workers are the owners . . . or, should we say, it is God who is the owner, and all which is produced is for His sake—and hence for the community of all who have faith in Him”

This is the very principle of the OM-MAT, the charismatic community of Islam, as it was in the days of the Prophet and as it has existed as a cherished ideal down through the ages in Islam up to the time of the present Revolution, forming the material basis of the spiritual ideal. “If we seek to satisfy God, if what we do is for His satisfaction,” says Bharga, referring to both the individual’s role and to the ideal of the community, “then we shall reap the fruits which He provides in being satisfied with us. Spiritual life is an exact science. Just as you consult a doctor for your ills, you can go to a ‘spiritual specialist’ to learn how to love God.”

The ardent young Iranians at Govinda restaurant have chosen to seek that consultation, sharing together because, as Bharga puts it, “we are spiritually all the same.” The peaceful—nay, the blissful—looks on the faces of the devotees who serve the restaurant customer express like nothing else the aim of their faith. In Bharga’s words, “The closer we get to God, the happier we are.” 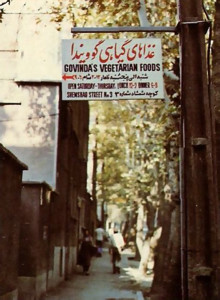 Hong Kong—The Hong Kong branch of the Bhaktivedanta Book Trust has announced the publication of a Chinese edition of Srila Prabhupada’s Bhagavad gita As It Is. This being the first translation of the Gita into that language, the one billion people who live on mainland China (nearly a fourth of the world’s population) will now begin to have access to the science of Krsna consciousness.

It took Yasomati-suta dasa, a devotee based in Hong Kong, more than five years to render the Gita into the intricate Chinese script. He remarked, “Although China and India are neighbors, very little of the rich spiritual tradition of India has penetrated China, largely because of the language barrier. Now that impediment has been removed—and the significance for the spiritual development of China cannot be overestimated.”

Maharastra, India—Even from a distance the two fifteen-foot-long bullock carts, covered by bright thatched roofs and each pulled by two white long-horn Khilari bulls, caused quite a stir. Most of the villages in this mountainous region of central India contain at least five thousand people, and everyone gathered in the main square when the traveling bullock carts came to visit.

The idea for bringing the message of Lord Krsna to the villages of rural India by bullock cart was suggested by Srila Prabhupada before he passed away in 1977. In August of last year, a team of devotees completed work on the carts and set out from the Hare Krsna temple in Bombay. Their tour took them through most of southern Maharastra.

When arriving in a new village, the devotees would begin chanting Hare Krsna as the villagers gathered. Then the devotees distributed literature on Krsna consciousness and dished out large helpings of vegetarian foods offered first to Lord Krsna. The leader of the traveling party,

His Holiness Aksayananda Swami, lectured in Hindi from the Bhagavad-gita, and afterward the devotees showed a film on the activities of the Hare Krsna movement worldwide.

One Response to Govinda’s Restaurant in Tehran