Back to Godhead > ISKCON > Gurukul > Gurukula 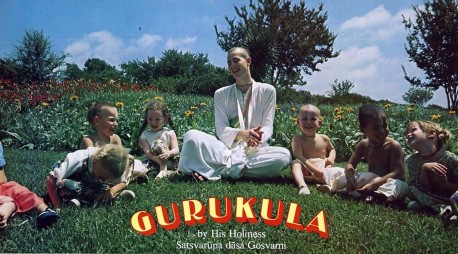 By His Holiness Satsvarupa dasa Gosvami

Whenever I see pictures of the Gurukula school in Dallas, Texas, or whenever I am fortunate enough to visit there, I always think, “I wish I had gone to Gurukula when I was a boy; I wish every child could go there.” When we first disciples joined the Hare Krishna movement in 1966, there was no children’s school; and besides, even then we were too old for Gurukula. Gurukula, a school for children ages five to fifteen, was founded by the International Society for Krishna Consciousness in 1971. Why should we wish that every child could attend Gurukula? Because Gurukula is the only school teaching how to live according to the Vedic scriptures, which teach one how he can know himself to be eternal, blissful and full of knowledge. 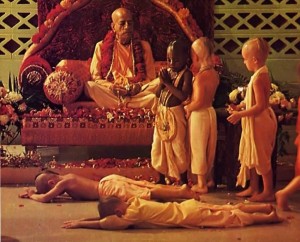 Honoring a saintly person. Gurukula children take pleasure in offering flowers and respect to Srlla Prabhupada during one of his visits to the school.

There have been many favorable news articles written about this new educational project, but one criticism sometimes given is that Gurukula indoctrinates children who are too young to resist its spiritual philosophy. In answer, we may note that any method of raising children is a kind of indoctrination, even letting your child do and think whatever he likes. Whatever parents or instructors teach by their example, a child will take very seriously. In the impressionable, formative years, therefore, the Krishna consciousness movement is training children in the perfection of religion. This training is hardly reprehensible. Indeed, it’s what the world needs.

So what goes on at Gurukula? First of all, as in no other school, there is chanting of the holy names of Krishna, dancing in ecstasy, and eating of prasada, food offered to Krishna. In all these activities the children have the company of many wonderful friends their own age, who are all devotees of the Supreme Lord. Bhagavad-gita tells us that if one seriously pursued spiritual consciousness in his past life but did not perfect his progress, in the next life he may take birth in a family of devotees or advanced transcendentalists. Therefore, the children at Gurukula are not ordinary, or they wouldn’t have been born as the sons and daughters of devotees who want their children to be brought up in Krishna consciousness. They are extraordinary children because their parents want them to be liberated from further suffering and to become eligible to enter the Kingdom of God. Of course, Gurukula is open to all children, regardless of race, creed or financial position, but the fact remains that the children attending Gurukula are actually elevated souls in the bodies of children. The great sage Jiva Gosvami said, “If a child is properly trained, he can become a great devotee of the Lord.” Therefore, any child who goes to Gurukula has the best of friends—playmates who are always chanting about and glorifying Krishna and eating Krishna-prasada. 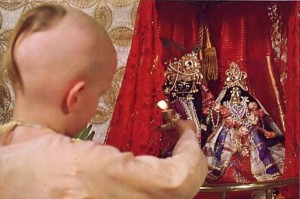 Dvlirakadhisa dasa offers a lamp to Krishna. A child develops his natural love of God by caring for small Deities of the Supreme Personality. Many of the children have Sanskrit names, which are all different ways of saying “servant of Krishna.”

The academic curriculum at Gurukula includes English, math, history and geography, but the children also learn to read Sanskrit so that they can understand the Vedic literature in its original language. Also, Gurukula stresses practical instruction in personal cleanliness. The teachers, who all live with the students at Gurukula, follow four rules: no illicit sex, no meat eating, no intoxication and no gambling. Thus they are real teachers, and because of their dedication to Krishna consciousness they can offer real love and guidance to the children by helping them revive their dormant love for God.

Someone may say that Gurukula is a very specialized school, but when the Vedic civilization was current, thousands of years ago, the spiritual values taught at Gurukula were inherent in every educated person. So a Gurukula education is not a sectarian creed or an artificial imposition on the mind. It is nothing less than bhakti-yoga, the revival of the individual’s loving relationship with God, which has now been all but totally forgotten by the world’s great civilizations. 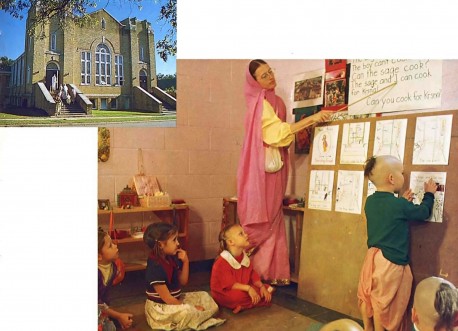 The Gurukula auditorium. This is one of two main buildings. The school also has an inner courtyard and a large open playground. One hundred children and forty adults live at Gurukula.
A God-centered English lesson. Children at Gurukula simultaneously learn about reading and the Absolute Truth.

Where I went to school, and maybe where you went to school—or where your child goes to school now—the other kids were simply concerned with enjoying material life and didn’t much care about spiritual realization. Drugs and illicit sex were the norm, even in the grammar schools. Of course, I learned many things in the schools and colleges I attended, but if I had not met His Divine Grace Srila Prabhupada, I would have wasted my life. Human life is actually meant for realizing oneself as a spiritual soul, and realizing one’s eternal relationship with God as His servant. Unless one learns who he is in relation to the Absolute Truth, whatever he does is simply a waste of time.

We should be glad that in America such a pure spiritual force is present to counteract the failures of materialism. Gurukula should be encouraged, and indeed every parent should consider, “Why don’t we send our child there?” One who is beyond sectarianism and who sees the ultimate good for his child as spiritual happiness will be hard-pressed to find a better school than Gurukula. 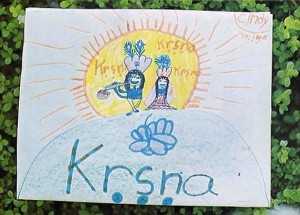 A specimen of Gurukula art.