Back to Godhead > ~Featured~ > Goverdhan Hill 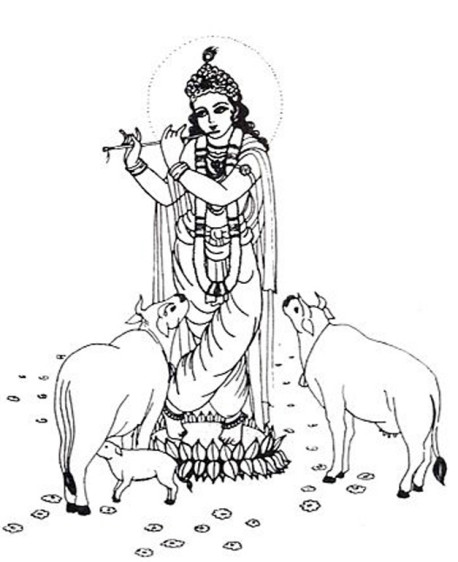 Little known to most of the world, there is a spot in India where the Supreme Godhead, Krishna, once displayed the eternal pastimes of His spiritual kingdom. This is the story of that place as it still endures.

Goverdhan hill is inseparable from Krishna, the Supreme Lord. Goverdhan was manifested in the land called Vrindaban when Krishna appeared there to display His incredible array of transcendental pastimes from the spiritual world. Krishna always remains the unbound blissful Supreme Entity, and everything and every living being is His creation. All living entities are only expansions of His own Self, and bear His own subtle and transcendental qualities when they are in a reciprocation of action with Him. 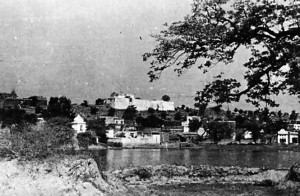 In the background of this photo is the low, plateau-like Goverdhan Hill which Lord Krishna once picked up with one hand.

In the spiritual realm, which exists outside the purview of the entities in this temporal or mundane world, even inanimate objects have consciousness; and every being’s action, whether as a young boy or as the soil beneath Krishna’s feet, is a part of an intense love relationship between himself and Krishna. This eternal relationship is ever-increasing in its fulfillment and is unbounded by time or space.

Every object of the eternal realm is simply a manifestation of love for the Lord, coming originally from Himself. There is no lack of the necessary implements of service, because those implements have become manifest by the sentiment of serving the Lord in some particular way. Thus there is never any frustration in the eternal realm, because every deed is performed as an act of devotion to the Lord. In short, the only thing which does not exist in this realm is the absence of love for the Lord.

Everything being the Lord’s manifestation, at the same time both conscious and active, it is to be understood that the Lord is omnipotent. And one of His energies, called His internal potency, is created to give pleasure to His own Self in the form of conscious and independently acting living beings. From the Vedic writings we can understand that the beings of this temporal world are originally a part of this internal potency. 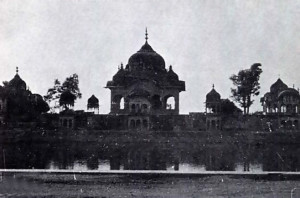 An old palace at the foot of Goverdhan Hill.

Krishna advented Himself in this world for the purpose of recalling the fallen living entities to their original place in the spiritual world, and also in order to please the hearts of His devotees here on earth. When He came, He told Vishnu, Brahma and Shiva (the three ruling powers of this universe) that they could all incarnate as mountains; and so Brahma incarnated as a hill in Varsana (Radha’s home), Shiva incarnated as a hill in Nandagam (Krishna’s father’s home), and Vishnu incarnated as Goverdhan Hill, a hill in Braja where Krishna engaged in childhood pastimes with the cowherd boys and girls.

Brahma is Krishna’s special agent for the creation of this material world. Shiva is a form of the Lord that results from the Lord contacting the energy of this material world we see. This is often compared to milk turned into yogurt. Though made of milk, it can never be turned back to milk again. Shiva’s position is like that. Both these agents have some direct connection with the material sphere of activities, but the third party, Vishnu, has no connection with this material world. Still, He is not a complete form of the Lord, for Krishna is the embodiment of more qualities than even Vishnu. He will reciprocate not only a feeling of servitude for Himself, but feelings also of friendship and of filial and amorous affection. Vishnu is an expansion of Krishna for the purpose of ruling, and He is created by Krishna in the way that one candle lights another candle. When Krishna lifts Goverdhan, then, we might say it is the Lord lifting the Lord. 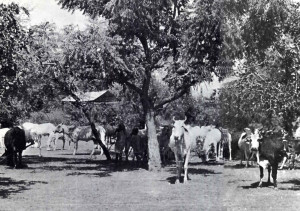 In a manner similar to Krishna and the cowherd boys, children still tend herds of cows in the fields and forests surrounding Goverdhan Hill today.

Being especially merciful, Krishna allows the Brijbasis, the residents of Braja (Vrindaban), to gaze on His Eternal blue moonlike face for 14 days without a moment’s interruption, and to drink the limitless ambrosial nectar emanating therefrom. Meanwhile, He accomplishes the equally supramundane purpose of protecting all the residents of Braja from the torrential rains sent by Indra, the vain king of the heavenly planets of this cosmos. 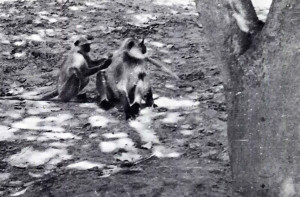 Black-faced monkeys such as are frequently to be seen along the Parikram path.

The story of this event is as follows: Krishna’s father Nanda was in the custom of performing sacrifices to please the demigod of the heavens, Indra, in order to receive good rains for his crops. But seven-year-old Krishna told him there was no need to perform sacrifices for Indra, that it was Indra’s duty to supply rain anyway. Therefore His father stopped the sacrifices, and the people resumed their usual work. Meanwhile, Indra, who was not receiving his sacrifices, became angered and sent torrential rains down upon the Brijbasis. At that time it was the Lord’s grace to perform the superhuman feat of lifting Goverdhan on His little finger, to act as an umbrella for His friends and kinsmen. He thereby showed that simply to follow the Lord’s advice is better than following all the scriptural injunctions, because He remains supreme over all the demigods, who are only His agents. And He will protect His devotees personally in all circumstances. 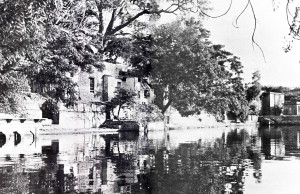 A view of Krishna Kunde (His bathing place)

Of course, the scriptural injunctions are not without purpose. But they are meant to help one attain to love of the Supreme Lord, which is the be-all and the end-all of existence.

During the 14 days of torrential rain, all the residents of Vrindaban were protected by standing under the umbrella of the uplifted hill. By the end of that time Indra, realizing his mistake, came down to earth and bowed down before the Lotus Feet of Sri Krishna, his worshipable Lord. 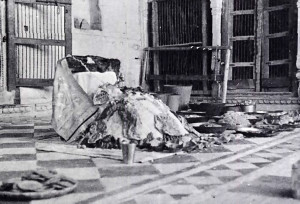 A small Gopal (Krishna as a cowherd boy) Murti (Deity) seated atop a mountain of rice representing Goverdhan Hill during a special Goverdhan holiday.

Goverdhan also gives unlimitedly to Krishna. And when Krishna and His cowherd friends come to Goverdhan, Goverdhan prepares many lush groves and clear silver streams for them. Soft grasses and gently-stirring breezes lure the Lord closer. And when Krishna comes, all Nature sighs in ecstasy, and with a quickened pulse-beat, all living things become a harmony of joy. All the creatures of the forest—even those most shy of animals, the deer and the small birds—come out to frolic with Krishna and the cowherd boys. There is no fear, but only unbounded love, in the presence of Krishna. Nature then abounds in a wealth of beauties, many colored butterflies fill the air, and the earth sprouts forth with love all its wealth of flowers. 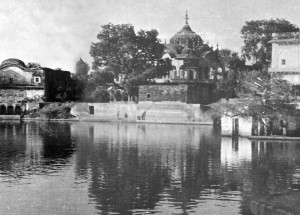 Hare Krishna once made a Ganges come up from the ground when He desired to take a bath. This pond is the result.

Here Krishna and the cowherd boys play at many games. Finding in the woods many types of colored clay, they smear their arms and faces with it, and make designs on one another with much laughing and joking. Some follow the brooks after the frogs, imitating their way of jumping, and others chase through the fields after the shadows of the birds flying overhead, or stand imitating the way of the cranes. Looking into the clear ponds, they make faces into the reflections. And a group of boys, finding a deep cave, shout insults into it to hear the cave’s echoed reply. They discard their clothing and instead wear suits of leaves and flowers, and decorate themselves by wearing pretty flower garlands around their necks and in their hair. Then Krishna sits beneath a tree whose branches, laden with fruit, droop heavily, almost touching the ground. The cows and deer all flock around Him to lick His moonlike face, and the honey bees fly nearer, attracted by the unfolding red petals of His ambrosial lips. 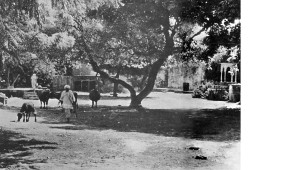 A scene along the “Parikram” (circumambulation) path on Goverdhan.

When Krishna and the boys walk together with the cows, returning home at the end of the day, sometimes Krishna plays His soul-enchanting flute. And, receiving the ocean of nectar that outpours from its silvered strains, all the animals of the forest stand like stone, transfixed by the coursing of His music which, like a living vine, twists gently about the very heart of Creation. All natural laws are crumpled and melted by this sweetness, and the rocks begin to flow like liquid, and the brooks and streams sit stilled by the music which penetrates to the very core of existence. Mother Earth heaves a sigh, relieved of her burdens, as the cowherd boys dance together with Krishna, frolicking all the way home. And this is the nature of the pastimes of the Supreme Lord. 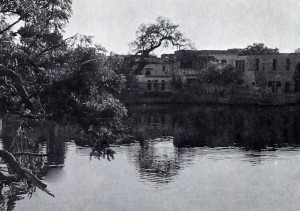 Today, people erect tiny houses of bricks or stones all around Goverdhan Hill. It is their prayer to be born in that most holy of places. And people press their faces into the holy dust of this land for miles around. And even this extreme form of worship is not for any personal benefit in terms of material remuneration, but is conducive only to Bhakti, or love for the Lord, which is to be understood as the greatest benediction on the living entity.

Why do devotees of Goverdhan and Krishna ceaselessly offer their bowing obeisances? And why do they constantly sing the Names of the Lord with loving affection? It is because we have all become trapped in a world of temporal things, which is not our natural position; and the Lord in His blissful compassion has enacted the pastimes of Goverdhan to present us with the key to the shackles of birth and death and illusion. We are thus invited by Him to enter into that spiritual realm of bliss and happiness for which we were all created. Of course, it is not possible for anyone to imitate these pastimes of the Lord, but if we hear about them from the authorized source, the disciplic succession, then we can partake eternally of that full life which is to be had in the highest and most blissful of all realms, the Abode of the