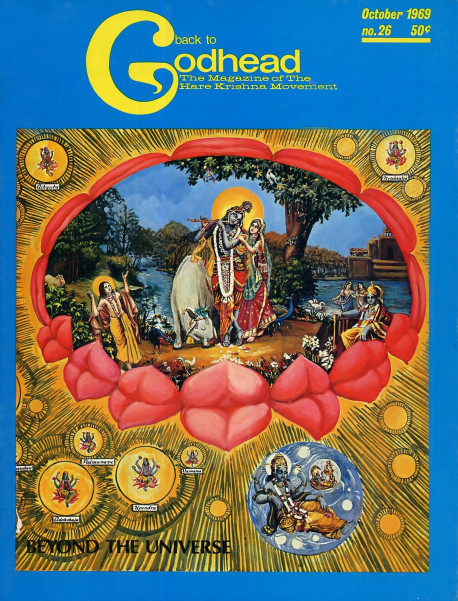 The Absolute Truth, Radha Krishna, and the Creation.
Arylic by Murlidha.

The painting on this month’s cover of BACK TO GODHEAD was originally commissioned by His Divine Grace A.C. Bhaktivedanta Swami for the dust jackets on his 60-volume masterwork, “Srimad Bhagwatam.” The present version is by Murlidhar, a young disciple studying in Los Angeles, California. Following is His Divine Grace’s explanation of the picture:

1. The original spiritual planet, resembling a huge whorl of lotus flower, is called “Goloka Vrindaban,” and is the abode of Lord Krishna, the Original Personality of Godhead.

2. This original planet is throwing out a spiritual ray or effulgence, called the Brahmajyoti, which is the ultimate goal of the impersonalist philosophers. This is the White Light or dazzling Brahman so prominent in mystic and philosophical treatises, often accepted as the ultimate formless state of the Absolute Truth. The Brahmajyoti is due to the illuminating Vaikuntha planets, and thus there is no need of sun, moon or electricity there.

3. Within the unlimited Brahmajyoti there is an unlimited number of spiritual planets, just as there are innumerable material planets within the rays of the material sun. These spiritual planets are dominated by plenary expansions of Lord Krishna, and the inhabitants there are ever-liberated living beings. They are all four-handed. The Lord is known there as Narayana, and those planets are known as Vaikunthas.

4. In some corner of the spiritual sky, or Brahmajyoti, a spiritual cloud arises, and this covered portion is called the Mahat Tattwa, or total material substance. The Lord, by His expansion as Maha Vishnu, then lies down in the water of that Mahat Tattwa. This water is called the Causal Ocean, or Karana Jal.

6. Into each and every universal globe the same Maha Vishnu enters as Gharbodakshayee Vishnu, and He lies down there on the Garbha Ocean, on the serpent-like Sheesha incarnation. From His navel a lotus stem sprouts and on this lotus Brahma, the lord of the material universe, is born. Brahma creates all living beings in different forms, in terms of their desires within his universe. He also creates the sun and moon, and the other demigods who are to work under him.

7. The sun in every universe is situated almost in the middle, and as there are innumerable universes so there are millions and billions of suns and moons, distributing profuse light, heat, temperature and rays all over these universes. All of them are, however, compact within the compass of the Mahat Tattwa, as explained above. The suns and the moons are required within the universes because the universes are dark by nature. The Vedas instruct us to go out of the darkness altogether, and to approach the glowing effulgence of Brahmajyoti.