Back to Godhead > Devotees > Preaching > Vegetarianism > Sweet Food For Krishna

Cinnamon Apple Pastries are a great treat either served by themselves or as a dessert. The dishes they complement best are vegetable preparations such as Sweet Pepper. And to finish the meal off I’m passing down a preparation given to the Krishna conscious students once in a lecture by our Spiritual Master. The original recipe had an ingredient called “Misri,” but misri is extremely hard to find in the United States, so we are substituting white sugar for it. “Kiba” is a Sanskrit word meaning come and see, so Kiba Taste means come and experience the nice taste of this preparation.

Over a high flame heat butter or ghee in a large skillet. When it smokes add fresh ginger. Cook for two minutes. Stir in chopped celery. Cover and cook till celery starts to become soft. Add peppers, cover and cook until tender. Add spinach, cover and steam for ten minutes. Remove cover. Stir in sugar, then salt. Cook until most of water is gone. Turn off heat. Add black pepper. Serves 5-6.

Mix all ingredients well and see the taste. Serves 2-8.

Sift flour and baking soda together. Add butter and rub together till well mixed. With water make a stiff dough. Take a small amount of dough and roll into a rectangular shape twice as long as it is wide (a nice size is 3″ x 6″) and paper thin. Rub entire surface with your stick of butter, except for a half-inch border on all sides. Spread a thin layer of apples and raisins on buttered area. Mix together the portions of sugar, salt, cinnamon and coriander in a bowl. Spread a generous amount of this mixture over apples, keeping some aside for later. Roll up rectangle of dough with apples, etc. inside. Rub entire pastry with butter. Sprinkle with sugar-spice mixture. Perforate 5 times with a fork and bake at 375 degrees for 35-45 minutes. Makes about 1 dozen.

Various stages in the preparation of Cinnamon Apple Pastry. 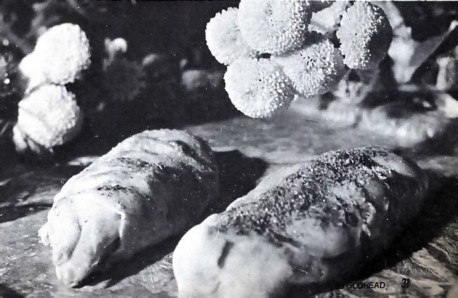