Back to Godhead > ~Featured~ > Evolution Or Production? 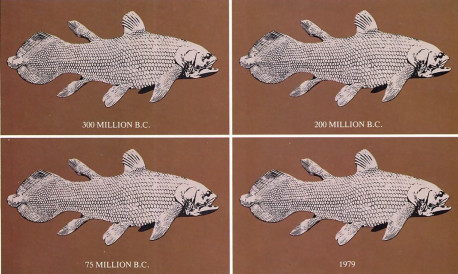 Since the theory of evolution requires a continuous process of gradual change in living forms, it has great difficulty explaining “living fossils” like the coelacanth (above), which remains virtually unchanged after 300 million years.

JNANA DASA earned his M.A. in chemistry at Wadham College, Oxford, and his Postgraduate Certificate of Education at London University. For four years he taught science at the secondary school level, and for two years he lived as a novice and monk in Buddhist monasteries in Japan. He has been a member of the International Society for Krishna Consciousness since 1974 and has worked with the Bhaktivedanta Institute since 1977.

Implicit in current theories of evolution are two basic assumptions: first, that the myriad living forms have come into being exclusively by chance and the action of natural laws; and second, that consciousness and all life processes are nothing more than physiochemical interactions. In many arenas, both within and without the academic world, a debate is raging to determine the truth or falsehood of evolutionary theory and its implied assumptions. And for good reason. For if it is indeed true that life is ultimately nothing more than the interactions of atoms and molecules, then any foundation for belief in God or a transcendent purpose to life would be utterly devastated. On the other hand, if the still unproven theory of evolution could be replaced by a scientifically verifiable theistic explanation for the origin of life and living forms, there would exist a firm basis for faith in an intelligent creator who endows life with meaning and purpose.

Here we would like to present such an alternative to evolutionary theory—an alternative which, for the sake of comparison, we shall call “the theory of production.” This theory proposes that biological forms do not arise from the spontaneous self-organization of matter, but rather under the direction of a superior intelligence. Furthermore, it suggests that life and consciousness are not material phenomena, the results of physiochemical reactions. Instead, they result from a distinct, irreducible, nonphysical principle or entity, which is present within the material body during an individual’s life time, and whose departure from the body leads to the change called death.

If we want to determine whether it is the theory of evolution or the theory of production that is scientifically more valid, we must test both against the fossil record. It is there alone that we will find concrete evidence of creatures that lived in bygone ages. The two theories differ in their predictions of what the fossil record will reveal. For example, the theory of evolution (in its simplest form) predicts that the fossil record will show a gradual change of living forms. There should be no sudden appearances of new, groups of organisms or of novel bodily features. In other words, the fossil record should not show that organisms suddenly acquired fins, legs, or wings; rather, the record should document a step-by-step development of these organs over the ages. The theory of evolution further requires that the principle of gradual change apply to all groups of organisms. Although some organisms may change more or less than others (because of differing circumstances), we should expect to see some degree of evolutionary change in all groups over the millions of years recorded in the geological column.

The theory of production, on the other hand, predicts that the fossil record will reveal a markedly different pattern of change. Why should this be so? Let’s consider an analogy: the historical development of various types of engines. Steam engines, internal combustion engines, diesel engines, electric engines—none of these appeared by chance. Rather over the years men have designed and built them to drive vehicles, pump water lift weights, and so on. Now, we do not find that engines change gradually from one type to another. The reason for this discontinuity is that each type of engine is designed to take maximum advantage of particular chemical and physical processes, and it works by the interaction of precisely coordinated components Beyond a small tolerance, any variation in the size or shape of the parts, or in the kind of fuel used, will result in the dysfunction of the whole system.

Even if we consider only the various kinds of internal combustion engines, we find little scope for gradual, step-by-step development between them. Slight discrepancies in piston-stroke timing or gas-air mixtures can play havoc with any engine, so how can we imagine a gradual transition from, say, a piston engine to a rotary engine, or from an Otto engine (in which ignition occurs by means of spark plugs) to a diesel engine? Such changes are always sudden and radical; they date from the time when the new design is first produced by an inventor.

Now, the theory of production proposes that what is true for engines is also true for the forms of living beings. Unlike the theory of evolution, the theory of production does not require that the changes between species be gradual and continuous. Rather, it proposes that a superior, guiding intelligence has produced a discontinuous series of living forms—with no intermediate forms linking them. What does the fossil record actually reveal? In the words of the renowned evolutionist George Gaylord Simpson, “It is a fact that discontinuities are almost always and systematically present at the origin of really high categories [vertebrates, for example], and, like any other systematic feature of the record, this requires explanation.” ** (G.G. Simpson, The Major Features of Evolution (New York: Columbia University Press, 1953), p. 361.) The fossil record contains no evidence to back up evolutionists’ contention that multicellular organisms evolved from single-celled forms of life. Nor does it show how vertebrates evolved from the invertebrates; how spiders, crabs, trilobites, and insects evolved from simpler forms of life (supposedly some type of worm); how land plants evolved from marine vegetation; how flowering plants evolved from any previous type of plant; or how snakes, frogs, whales, and bats evolved from earlier, less specialized animals.

And just as major groups of organisms tend to appear in the fossil record without warning, so do new structural features, such as legs, wings, and feathers. Says evolutionist J. William Schopf, “Interestingly, almost any list of major evolutionary events could also serve as an inventory of major unsolved problems in paleobiology, for the fossil record has provided only limited insight into the nature of these important evolutionary transitions.” ** (J. William Schopf et al, journal of Paleontology, Vol. 47 (1973), No. 1, p. 1)

Another problem for the theory of evolution is the existence of “living fossils”—organisms living today that according to the fossil record were present on the earth in the same form millions of years ago. Since the theory of evolution requires a continuous process of gradual change in living forms, it has great difficulty explaining living fossils. The theory of production, however, requires no such continuous change. This theory proposes that the various species are products of intelligent design, and thus as long as the design remains unchanged, successive generations may remain unchanged indefinitely.

So once again the fossil record supports the theory of production, rather than the theory of evolution. The presence of numerous living fossils requires the evolutionists to explain why, if evolution did take place, it seems to have done so millions of times faster in some sectors than in others. For example, during the same 200 million years in which certain types of fish were supposedly evolving into human beings, another type of fish (the coelacanth) has remained essentially unchanged up to the present day. If we go even further back in the fossil record, we find that squids, certain types of oysters, and the monoplacophoran (a mollusc with a hinged shell) all appeared suddenly in the Cambrian period, about 500 to 550 million years ago, and have survived to the present day virtually unchanged. During the same time span, say the evolutionists, certain worms (whose remains have not been found in the fossil record) supposedly evolved into homo sapiens!

Now, the theory of production proposes that just as an engine works only when someone turns it on and operates it, so the body of a living organism is alive and functional only by virtue of the presence of the nonmaterial living entity. Further, as mentioned previously, the production theory suggests that the bodies of organisms are formed by a superior intelligence—an intelligence capable of producing limitless numbers and great varieties of forms. Thus the direct evidence of the fossil record, illustrated by our engine analogy, seems to confirm not the theory of evolution but the theory of production.

Of course, evolutionists have put forward a number of hypotheses to explain living fossils and the lack of intermediate forms in the fossil record. But no argument (however plausible it may seem) can obscure the lack of concrete evidence. One may be able to theorize about geological causes for the incompleteness of the fossil record; or about small, isolated populations evolving without leaving any fossilized remains; or about the possibility that evolution occurred by means of sudden extremely radical mutations, which would rule out the need for intermediate forms. But all these interpretations of the fossil record are indirect; they are based on the assumption that evolution has indeed taken place! The direct interpretation of the fossil record leads us inevitably to the theory of production, not evolution.

Many eminent men of science have stated that life is not reducible to chemistry and physics. These include Alfred Wallace (co-author of Charles Darwin’s first publication on evolution); Thomas H. Huxley (a contemporary of Darwin’s who championed Darwin’s evolutionary theory); and Nobel physicists Niels Bohr and Eugene Wigner. The eminent mathematician John von Neumann has shown how quantum mechanics implies that the consciousness of the observer (he called it the “abstract ego”) is distinct from all aspects of the observer’s body and brain. ** (J. von Neumann, mathematical Foundations of Quantum Mechanics (Princeton: Princeton University Press, 1955), pp. 417-421.) This concept of an “abstract ego” corresponds to the irreducible nonmaterial entity posited by the theory of production and called the jivatma by Lord Krsna in Bhagavad-gita.

In Bhagavad-gita Lord Krsna says that He is the ultimate designer of all living forms: “Under My direction material nature is producing all species of moving and nonmoving beings.” Later Krsna says that the forms of living beings are like machines made of matter, and that within them the minute, spiritual living entity (the jivatma) resides.

And what is the nature of the jivatma? Krsna’s first instruction in the Bhagavad-gita is that the living entity is indestructible, eternal: “For the living entity there is never birth or death. Nor, having once been, does he ever cease to be. He is unborn, eternal, ever-existing, and primeval. He is not slain when the body is slain.” How, then, could the living being be a product of chemical activity? Rather, he is an eternal particle of spiritual energy, completely distinct from the actions and reactions of matter. His presence in the material body diffuses consciousness throughout every part of the organism, just as the sun diffuses light and heat throughout the solar system.

Finally, we also learn from the Gita that it is Lord Krsna Himself, dwelling within each bodily form as the Supersoul, who provides every living being with the knowledge and understanding necessary to live within the world.

Thus we can see how the teachings of Lord Krsna in the Bhagavad-gita are confirmed, rather than contradicted, by the findings of modern science.