Back to Godhead > ISKCON > News > Ramayana — Every Town and Village

Ramayana — Every Town and Village

Ramayana: A Hit at NYC Festival 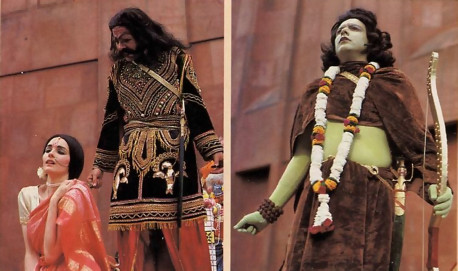 The demonic Ravana holds the chaste and beautiful Sita captive (above left ). But Sita remains convinced that Her eternal spouse Lord Rama (above right) will come to the rescue.

For several years now, actors and critics alike have been paying regular visits to the Hare Krishna Building to take in performances by Govinda’s American Theater Ensemble (G.AT E.). The special attraction of late has been the Ramayana, the pastimes of Lord Krsna’s avatara Lord Rama. During New York’s recent Festival of the Chariots, G.A.T. E. took the Ramayana outdoors, and Elinor Fuchs of the Soho News did this review:

“If you had been on LaGuardia Place last Saturday afternoon, just below Washington Square Park, you could have witnessed a two-hour performance of scenes from the Ramayana, the great Hindu epic, produced and acted by members of the Hare Krishna movement.

“The afternoon was a celebration of Ratha-yatra, or the Festival of the Chariots, sacred to Jagannatha, a form of Krishna worshiped in the city of Jagannatha Puri, India. Two brightly painted wooden chariots with silk canopies thirty feet high arrived, tugged on thick yellow ropes. Jagannatha and other Deities on their red velvet thrones were then installed on a raised platform set against the dramatic red walls of New York University’s Bobst Library.

“When the drama finally begins, the mighty demon Ravana’s ugly sister attempts to seduce Lord Rama in the forest.

Rama is faithful to the chaste and beautiful Sita, and the titanic battle between the divine and the demonic is launched.

“Thirty small children, most of them from the New York Hindu community, stand at the foot of the stage, flinching in delight at the sword play and bow-and-arrow battles. Part of the adult audience sits behind them on folding chairs; others stand on the sidewalks under the trees. An unknown seven-year-old girl wreathed in marigolds arrives on my lap and stays for an hour.

“The street-theater interest would have lured one forth in short, but one stayed to admire the conviction of the players, none of whom has had professional acting experience, though the man who played Hanuman, the monkey servant of Rama, had extensive ballet background.

“The principal parts of Lord Rama, his consort Sita, Rama’s enemy Ravana, and Hanuman were played with evident religious inspiration and commitment. This same spirit had a unifying effect on the most diverse theatrical means, which included three ballets for masked animal characters, songs accompanied by guitar, and a taped score that freely alternated traditional Indian music with Rachmaninoff and Rimsky-Korsakov. Ravana’s last-ditch exhortation to his troops, before he is overwhelmed in battle by Rama and his monkey legions, was shouted over a passage from Stravinsky’s Rite of Spring. Many of the costumes and props were spectacular, and the make-up, wigs, and masks were vigorous and bold. This was a Ramayana with no holds barred, and not the slightest trace of amateur’s embarrassment, even though the quality of performance became uneven in the smaller roles.

“The group of 12 players, at one time called the Theater of the Absolute Truth, but now more modestly titled Govinda’s American Theater Ensemble, has been performing the Ramayana pretty steadily for the past two years. The leading actors, Nandakishor Das and Lokamangala Das, who play Rama and Ravana, are the group’s co-directors and have spent between them 19 years in the Krishna consciousness movement. All the actors are full-time Hare Krishna devotees. They perform the Ramayana regularly on Friday evenings and on some Sundays at the Hare Krishna Building, 340 W. 55 St.”