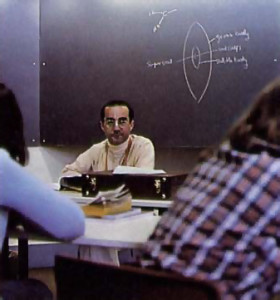 Michael Marchetti, Ph.D.: “The life-comesfrom-matter theory is based on prejudices rather than scientific, rational grounds.”

Calcutta—Recently Michael Marchetti, Ph.D., a member of ISKCON’s Bhaktivedanta Institute, addressed an international gathering of scientists and sharply criticized the theory that life comes from matter.

The Jubilee Symposium began with lectures on how the universe originated from a big bang and how life originated from molecules, both familiar themes for believers in chemical evolution. But the day concluded with a different sort of big bang.

Dr. Marchetti affirmed that consciousness is the fundamental entity and matter the derivative. He went on to say that modern science has failed to provide any tangible evidence that matter can produce consciousness (which strongly suggests that consciousness has always existed apart from matter).

As further evidence that consciousness is primary, Dr. Marchetti pointed out that modern mathematics has failed to show how simple molecules could possibly organize themselves into complex life-forms. Information theory confirms that elements of low information-content (simple molecules) can never evolve into forms of higher information-content (life-forms) without some source of information to organize that development. (“Chance” development is practically impossible.)

Scientists have failed, Dr. Marchetti said, to demonstrate that the required high information-content was present in the earth’s primal biosphere, and this suggests that there must have been some kind of conscious guidance of the process of evolution.

“We must conclude,” said Dr. Marchetti, “that the scientific paradigm that life comes from matter is backed neither by experimental evidence nor by theoretical principles. Consequently, we must consider that belief in the life-comes-from-matter theory is actually based on philosophical prejudices rather than on scientific, rational grounds.” None of the scientists present offered any objections to Dr. Marchetti’s critique of chemical evolution or to his call to form a new basis for scientific research, acknowledging consciousness as an irreducible factor of reality. This primacy of consciousness is consonant with the statements of ancient India’s Vedic philosophy: that all forms of life and matter emanate from a preexisting conscious source.

Dr. Marchetti received his Ph.D. in theoretical chemistry from Georgetown University, in 1970. He then worked at the National Bureau of Standards on a National Science Foundation fellowship. In 1972 he became an initiated disciple of His Divine Grace A.C. Bhaktivedanta Swami Prabhupada, and later he became a founding member of the Bhaktivedanta Institute.

Los Angeles—The Bhaktivedanta Book Trust, the world’s largest publisher of books on ancient India’s Vedic culture and philosophy, has recently released its worldwide sales figures for 1978. Last year the BBT sold 3.3 million hardbound and 4 million paperback copies of the books of His Divine Grace A.C. Bhaktivedanta Swami Prabhupada, as well as 4.6 million copies Of BACK TO GODHEAD, for a total of 12 million pieces. Says His Holiness Ramesvara Swami, a BBT trustee, “This figure is the highest total we’ve ever recorded. It represents an increase of 3.5 million over the 1977 total, or a 42% increase in sales.” Best-selling title: Srila Prabhupada’s Bhagavad-gita As It Is.

“All those interested in Indology, comparative religion, and mysticism will welcome the publications of the Bhaktivedanta Book Trust,” says M. N. Srinivas, Ph.D., past lecturer in Indian sociology at Oxford. “No library on Indian culture and religion can afford to be without them.”