Death by Suicide at an Early Age

“Maybe I Expect Too Much” 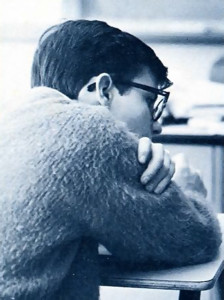 He was the consummate student, disciplined, industrious. He executed homework assignments with ritual precision, distrusted the frivolity of his peers, and adored the pursuit of knowledge. Eventually my friend Ralph, in his search for meaning, committed suicide at the age of sixteen. No one was less surprised than me.

Ralph would confide to me misgivings about his studies and the value of school in general. “It’s not what they’re teaching us,” he would say, “but what they’re not teaching us that bothers me. We never get to the bottom of things.” Circuitous discussions in history class flashed through my mind. “Maybe there is no bottom,” he would conclude. “Maybe I just expect too much.” My presence was superfluous. He was speaking to the universe.

His death came, caused slightly more than gossip, and went. There was no reason to dwell on the matter. He was never a part of the social crowd and was considered a bit strange anyway.

I forgot about Ralph until recently, when an article caught my attention. It heralded the “new trend in education—a search for excellence,” and bade educators reconsider a place for “lasting values” in curricula. Clearly my friend Ralph did not choose death merely over shallowness in his biology class; but his death did make one very powerful statement: for Ralph, modern education had no lasting meaning, no ultimate goal, and as far as he was concerned could never produce anything but a graduating class of frustrated, directionless men and women.

Ralph’s sensitivities were much more acute than mine—I survived high school. But I still wear the scars, of biology classes that insist on defining life in biochemical terms and promoting unproven theories of evolution as fact; of history classes that depict man in a progressive march through the ages, from uncivilized beginnings to a zenith of achievement and knowledge; of teachers whose abominable private lives are reflected in their presentation of literature and philosophy; of a secular education forbidden by law to teach the existence of a supreme intelligence behind the phenomena of the universe. During my third year in college, I met devotees and eventually dedicated myself to Krsna consciousness. Since then I have discovered a different kind of educational system, one that teaches about the soul within the body, the divinity of life in all its forms, and the refined qualities of a God-centered existence.

Give a child Cunier Rods, fancy textbooks, a seasoned teacher versed in Piaget or Holt, and you may succeed in teaching him elementary mathematics or even advanced grammar; but deny that child knowledge of himself beyond the temporary body and mind, and the whole effort has been a waste. How children learn is relatively unimportant if what they learn is wrong or only partially true. Certainly the body is an incredible mechanism, and yes’ it is important to know how to read and distinguish Africa from Australia. But the eternal soul within the body has nothing to do with the comings and goings of the material world- The soul is neither black nor white, neither American nor Russian, Protestant nor Catholic, boy nor girl. The soul is eternal, part and parcel of Krsna, or God, and no amount of legislation separating church from state will alter that fact.

The system in Krsna conscious schools is to first train teachers to see students as spiritual entities, not just as intellectual or physical entities, but eternal souls meant to revive their lost relationship with God. Then those teachers teach the basic lessons of education—reading, writing, history, geography, science—in a devotional context. What is a flower? It is a living entity who has taken his birth in the material world and; is now gradually evolving to human form. What is the best thing to do with a flower? Offer it to Krsna with love. Krsna will be pleased; and that soul in a flower form will be benefited by obtaining immediately a human body, instead of having to take so many more births in lower species first.

What makes the human form so special? Only in a human body can the spirit soul revive his lost consciousness of Krsna. God, Krsna, sends His son, a pure devotee, to teach us how to serve Him. By following the instructions of such a bona fide spiritual master, one can attain love for God.

Now let’s learn to read. “Pam ate her ham from a can with a yam.” That is sinful. Why? Because you have to kill the animal in order to eat the flesh. Read another sentence. “The dog ate his bone alone in his home.” So that is also sinful? No. Why not? Because dogs simply follow their animal nature. It is not sinful for them to eat meat. But a human being has higher intelligence. He should see that there are other things he can eat without having to kill.

But what about the flower? Isn’t it also alive? Yes, but Krsna says He accepts a flower if it is offered to Him with love. He doesn’t say He will accept a slaughtered animal.

Krsna conscious training may never be introduced in public schools, not only thanks to deeply ingrained prejudices toward spiritual subject matter, but due mainly to mere lack of interest. In a time of unlimited teaching aids and sophisticated theories on the learning process, “simple living and high thinking”—the motto of Krsna education—is not likely to be echoed through the halls of our nation’s schools. People today, young and old, prefer complicated living and simple-headed thinking. Still, Ralph and anyone else dissatisfied with the status quo would be pleased to know that somewhere the teachers never strike, the students never kill or rape, and the desks still have tops free from graffiti. Not only that—the children learn and are happy learning. All things considered, that’s a lot.