Back to Godhead > ~Featured~ > Vrindavan—Land of No Return

By His Holiness Brahmananda Svami 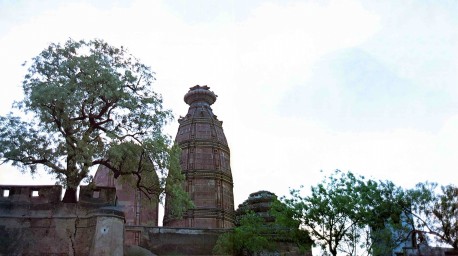 From the beginning of time, man has yearned for the perfect home—a paradise, a Shangri-la, a Walden—where he could live eternally in peace and happiness. Such a place cannot be found anywhere in the material world, however, for the material world is by its very nature temporary and frustrating. To end our weary searching, we must go beyond this world of duality, beyond the boundaries of space and time, into the spiritual realm.

Vrindavan, India, is that sought-after eternal resting place because it is at Vrindavan that Lord Sri Krishna, the Supreme Personality of Godhead, descended to this planet five thousand years ago. The Lord’s appearance and activities are not mundane; they are completely transcendental. Just as a king may travel with all his retinue, set up camp, and conduct his affairs of state in the same style as if he were in his palace, Lord Krishna brought with Him all His transcendental associates and paraphernalia and created on earth an exact replica of the spiritual world, known as Goloka Vrindavan. Because

Vrindavan is the eternal and entirely spiritual abode of the Lord, it is nondifferent from Him. At Vrindavan, one will find unlimited wealth, strength, fame, wisdom, beauty and renunciation—all the six opulences possessed by the Supreme Personality of Godhead, Bhagavan Sri Krishna. Indeed Vrindavan is Krishna, and, to go there is to perceive God Himself.

As you enter the boundary of Vrindavan, you can feel that this place is somehow different. First you explore the forest. The cool, sandy earth feels like lotus dust beneath your feet as you walk amidst the different kinds of trees: the black-barked tamala, the medicinal nim, the great banyan and the adorable tulasi (Vrnda is a name of the tulasi tree, and vana means forest). Here the forests are like parks, their grasses carefully manicured by thousands of white cows. The slow-moving cows, with their wide-eyed children’s stares, look like ancient sages silently meditating as they chew. Parrots and other multicolored birds decorate the trees, cascading pleasant songs into your ears, while peacocks in great abundance strut impressively and display their train of regal feathers. Vrindavan is bounded on three sides by the Yamuna River, whose waters are as pure as the primordial waters of creation. It is said that if one bathes in the Yamuna, all the sins of his millions of past lives are washed away. If you have even a little knowledge of Krishna, or even a slight attachment to Him, everything in Vrindavan reminds you of Him, and you find yourself feeling a kind of love for Him known as separation. 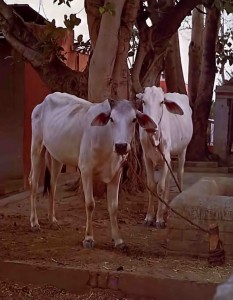 TRADITIONAL MAINSTAYS of village economy, cows are adored in remembrance of Lord Krishna’s affection for them. When He sported in Vrindavan thousands of years ago, one of Krishna’s favorite pastimes was escorting the cows into the pasturing grounds along with His elder brother, Balarama.

As you wander within the village of Vrindavan along the narrow, twisting, medieval streets, you come upon a series of temples made of heavy russet stone, which has been carved and filigreed into decorative lotus designs. As you enter one temple courtyard, you see Him: the Deity of Krishna, the Supreme Personality of Godhead, in the form of pure black marble, standing on a silver throne within a protective cupola, His feet strewn with tulasi leaves. His body is bent attractively in three places, and He plays the flute, inviting you to take Him into your heart of hearts. Next to Him stands His inseparable consort, Srimati Radharani, immaculate and beautiful. Do not think these Deities to be mere stone. As Krishna says in the Bhagavad-gita (7.24), “Unintelligent men, who know Me not, think that I have assumed this form and personality. Due to their small knowledge, they do not know My higher nature, which is changeless and supreme.” Anyone can see Krishna in the Deity, but first he must purify his vision by hearing about the Lord from the lips of a pure devotee, and by chanting His glories. Lord Caitanya, an incarnation of Krishna who appeared in Bengal, India, five hundred years ago, especially recommended chanting and hearing the holy names: Hare Krishna, Hare Krishna, Krishna Krishna, Hare Hare/Hare Rama, Hare Rama, Rama Rama, Hare Hare. This chanting churns up a very special ointment unavailable in any pharmacy. It is known as bhava, devotion. If you apply this ointment of bhava to your eyes, you can see the Deity as He really is—transcendental, alive, and worshipable.

Vrindavan has not always been a city of Deities and temples, however. Five hundred years ago, Vrindavan was simply open fields. At that time, Sri Caitanya Mahaprabhu personally went there to ascertain the holy sites where Lord Krishna had exhibited His transcendental pastimes. Soon afterward, Lord Caitanya sent to Vrindavan six of His foremost disciples, known as the Six Gosvamis. Their mission was to continue the work of determining the exact locations of Krishna’s pastimes, to develop these sites, and to write authoritative books on the science of Krishna consciousness.

Vrindavan is the land of Krishna, and just as Krishna is supremely beautiful, so is His abode. According to mundane vision, however, Vrindavan appears to be an ordinary village. Therefore to really see Vrindavan in its full, glorious beauty, we must purify our vision by becoming Krishna conscious. The Six Gosvamis have shown the way. They not only led perfectly saintly Krishna conscious lives themselves, but they wrote hundreds of spiritual guidebooks based on the revealed Vedic scriptures. By their mercy the sincere seeker can achieve the highest boon of life—love of Krishna. 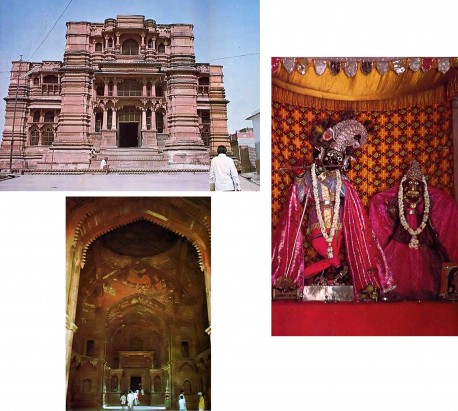 HALF ITS ORIGINAL SIZE, the Radha-govinda temple of Srila Rupa Gosvami stands in mute testimony to intolerance. A conquering Moghul tyrant, Aurangzeb, was so infuriated by its magnificence that he had the top dismantled stone by stone. Although the temple is missing four stories, its grand style still attracts pilgrims and scholars alike. The commanding architecture of the central hall marks it as the largest of the temples built by the Six Gosvamis.

The teachings of His Divine Grace A.C. Bhaktivedanta Swami Prabhupada are identical with those of the Six Gosvamis, for he follows in direct disciplic succession from them. Therefore by following his teachings, we can see Vrindavan as it really is. The Brahma-samhita, a poem written by Lord Brahma, the most exalted living being in this universe, describes the Vrindavan that the pure souls perceive:

“The transcendental land of Vrindavan is always spiritual. That spiritual land is populated by goddesses of fortune, who are known as gopis. These are all beloved of Krishna, and Krishna is the only lover of all those gopis. The trees of that land are kalpa-vrksa, wish-fulfilling trees, and one can have anything he wants from them. The land is made of touchstone and the water of nectar. In that supreme abode, all speech is song, all walking is dancing, and one’s constant companion is the flute. Surabhi cows flood the land with milk, and everything is self-luminous, just like the sun in the material world. Since every moment there is spent in loving service to Krishna, there is no past, present or future.” The human form of life is meant for understanding this transcendental land of Vrindavan. One who is intelligent should cultivate knowledge of Vrindavan, Lord Krishna’s eternal domain, and reach that supreme abode even in this lifetime. 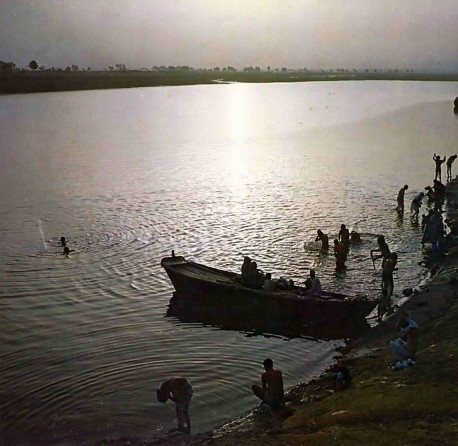 EMBRACING VRINDAVAN on three sides like a protective mother, the Yamuna River preserves the sanctity she derived from Lord Krishna when He played in her waters. So pure is her water that Vrindavan’s residents use it for drinking. cooking, laundering and bathing. A bath here, it is said, washes away the sins of millions of past lives. Starting high in the Himalayas, the Yamuna flows past Vrindavan on a six hundred mile journey to the city of Allahabad where s he joins the sacred Ganges.

KRISHNA BATHED HERE at Syamakunda, and since then His followers have taken advantage of the pool’s purifying effect.

His Holiness Brahmananda Svami, personal secretary to His Divine Grace A.C. Bhaktivedanta Swami Prabhupada, explains that his spiritual master resided in the most sacred and serene city of Vrindavan for a number of years and then left in 1965 to teach Krishna consciousness to the people of the West. By Srila Prabhupada’s infinite mercy and fixed determination, thousands of young men and women have taken up Krishna consciousness, and some of them have been inspired to come to Vrindavan to serve Lord Krishna in His personal abode. Under the direction of His Divine Grace, his disciples have built a magnificent temple and international guest house so that others, especially from abroad, can visit Vrindavan and experience its intense spiritual atmosphere. This is part I of 2 three-part series on Vrindavan and ISKCON’s beautiful center there.

OVERLOOKING VRINDAVAN TOWN, Madana-mohana temple awaits early-morning worshipers. A favorite place of pilgrimage, the temple was built in the sixteenth century by Sanatana Gosvami, a great Vaisnava saint, with the financial help of a wealthy salt merchant. When the merchant’s barge ran aground in the nearby Yamuna River, a small cowherd boy directed him to seek help from Sanatana Gosvami. Sanatana advised him to pray to Lord Krishna, and when he did so, his barge loosened and drifted free. In gratitude, the merchant gave the profit from the subsequent sale to Sanatana, who spent it all to build the lovely temple. 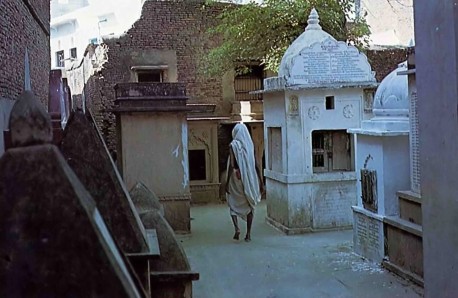 TO DIE IN VRINDAVAN is considered favorable for one’s spiritual advancement. Sitting in the shade of the Radha-Damodara temple, these tombs of noted spiritual masters are visited by devotees for inspiration in spiritual life.

3 Responses to Vrindavan—Land of No Return