Back to Godhead > Science > The Vedic Observer

An Eye For A Nose 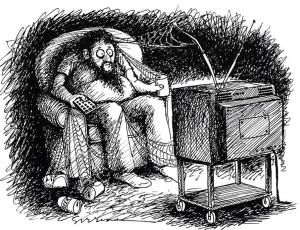 “What if scientists could distinguish scents with their eyes?” queries a recent report in one popular magazine. Researchers, the article goes on to explain, are trying to do just that. By using electrical and chemical sensors that mimick the action of our olfactory nerves, scientists may be able to “see” a scent by its chemical configuration.

Upon reading this, I immediately recalled the ancient prayers of Lord Brahma. Lord Brahma is the creator-engineer of our particular universe, and the Brahma-samhita is his collection of verses in praise of the Supreme Personality of Godhead, Krsna. One verse explains that each of the senses of the transcendental body of the Supreme Personality of Godhead possesses “the full-fledged functions of all the organs.” In other words, the supreme scientist, Krsna, can smell with His eyes or taste with His eyes or do anything with any of His senses without any limitation or restriction.

Naturally, we try to imitate that Supreme Person. We want to experience life perfectly and fully. We long for unlimited sensual prowess, strength, and beauty, and for various powers and abilities. Frustrated by our fettered existence, we are titillated and challenged by the prospects of increased freedom. If we can learn to smell with our eyes, the article concludes, this development could “revolutionize such industries as wine, perfume, and entertainment.”

Whether or not scientists will succeed in this endeavor is of little consequence, since our senses will remain limited—even if we can smell with our eyes. One wonders if our erudite scientists will ever learn to see past their noses, so to speak. Unlimited sensory freedom will be realized only when we turn from the limited activities of sense gratification to the unlimited activities of devotional service.

God has designed our bodies and senses, limited as they are, to be used in His service. We can use our eyes for beholding the form of the Lord, our ears for hearing topics of self-realization, and our tongue for praising God and His activities. Though our senses are at present limited, Lord Krsna is offering us the chance to engage in the pure spiritual activity of devotional service, an opportunity with unlimited potential.

A newsletter from the Blue Cross Medical Association warning of a deadly new disease called couch fever prompts me to draw some rough parallels between physical and spiritual health.

Doctors reported a near epidemic of couch fever during the holiday season last year. In one severe case a forty-year-old man with no previous health problems woke up on New Year’s Day, plopped himself down on the sofa in front of his TV, watched three consecutive football games, then went to bed for the night. He was soon in the hospital with a blood clot in his lung, a condition doctors attributed to his more than forty hours of inertia. You’re right, couch fever isn’t all that new; it’s at least as old as television.

Not everyone falls for this television catatonia, of course. Not professional athletes, who make a living from physical skill and exertion. Not the millions of health conscious persons for whom jogging is a chosen preoccupation.

But even intense physical activity is a kind of catatonia if we forget that our physical bodies are but temporary vehicles for our eternal, spiritual selves. Just as you don’t get much exercise driving your car around town, so the self, or soul, remains inactive while driving the body.

We are but witnesses, observing the body’s physical movements through our senses of sight, smell, touch, taste, and hearing, much as the couch-bound sports fan observes his favorite team on a television screen. The soul is even less active than television viewers or automobile drivers, who can at least press a remote control button or turn a steering wheel. Between our will to bodily action and the actions themselves, the material nature, working under the supervision of the Supreme Lord, stands as the insuperable intermediary.

The Gita explains: “The spirit soul bewildered by the influence of false ego thinks himself the doer of activities that are in actuality carried out by the three modes of material nature.”

Falsely identifying with our bodies, we fail to understand that, aside from willing or desiring, our spiritual selves do nothing at all in the material arena.

How do we put an end to this spiritual inactivity? By using our bodies and minds to serve Krsna, the Supreme Person. Or even by desiring to do so. Using our senses to please Krsna’s senses is called bhakti-yoga, or devotional service.

From a material perspective, yes, the bhakti-yogi still does nothing at all. But employing the senses in Krsna’s service gradually awakens and activates the soul’s transcendental body. Furthermore, Lord Krsna appreciates the spiritual sentiments, not merely the physical efforts, of His servants, and He readily extends His own spiritual senses to reciprocate with us. Even the slightest attempt at devotional service is spiritual activity and is bound to improve our spiritual health.

Just how slight an attempt? The doctors and advisers at Blue Cross inspire another parallel.

Dr. Thomas Farrell, an ophthalmologist, suggests that to prevent your corneas from drying out during TV stupors, don’t forget to blink every couple of seconds.

Dr. William R. Francis, an orthopedist, says you can avoid back problems by standing up during commercials.

And Dr. Edward J. Resnick advises that to stimulate your circulation and thus avoid blood clots—you should at least take off your shoes and wiggle your toes!

Well, it just so happens that a start in bhakti-yoga is as easy as wiggling your toes. Lord Caitanya, the father of the Krsna consciousness movement, simply asked everyone to chant the holy names of God. And Lord Caitanya’s followers have published many provocative books on the science of spiritual health.

So the next time you get a minute’s break from life’s cathode tube, why not chant and turn a few pages. Then if the spirit moves you, try skipping a Sunday game or two so you can drop by your local Hare Krsna health center. 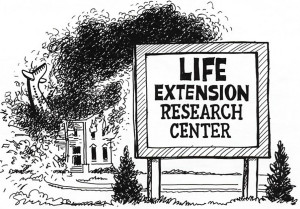 Respected members of the scientific community are now coming right out and saying what we thought was on their minds all along: Science can make us immortal. Gerald J. Sussman, a professor at MIT, says, “Everyone would like to be immortal. I don’t think the time is quite right, but it’s close. I’m afraid, unfortunately, that I’m in the last generation to die.”

And Professor Sussman is not alone in his beliefs. Scientists in the fields of cryonics (freezing bodies), artificial intelligence, genetics, and others are beginning to speak more and more confidently about the prospects of someday stopping disease, aging, and even death.

Perhaps it will be of some consolation to Professor Sussman to learn from the Vedic literatures that his generation will definitely not be the last to die. All generations before him have died, and all those after him will die. This unyielding law of nature will not succumb to the attacks of well-wishing scientists who want to liberate mankind from the throes of death.

How can I speak so confidently? Because I accept the words of Krsna, the Supreme Personality of Godhead, who says in the Bhagavad-gita, “I am all devouring death.” And, “Time I am, destroyer of the worlds, and I have come to engage all men.”

My confidence is also based on practical observation: Throughout history no one has been able to conquer death. Though modern scientists sometimes think their advanced discoveries hold the key to physical immortality, they also admit that there are innumerable factors involved in aging and death. They wonder, “How can we protect ourselves from all the advances of death?”

From the Vedic literature we learn of personalities possessing vast intelligence and stamina, and supported by the most advanced scientific knowledge, whose attempts to conquer death failed. The most famous example is the great materialist Hiranyakasipu. He received the benediction that he would not be killed by any man or beast or weapon, not during the day or night, whether inside or outside. He thought he had covered all the options, but God Himself appeared in a form that was half man, half lion and killed Hiranyakasipu with His divine nails on the threshold of the demon’s palace at twilight.

God has placed us in these bodies, and He decides when we’ll change them. And change we must. Scientists generally do not accept that we must transfer at death from this body to another, because they cannot understand that the soul is different from the body. The soul animates the body for a fixed duration, and no one can extend a soul’s term within a body.

Scientists manipulate the material elements in their attempts to find the secret of life. But despite repeated claims of breakthrough scientific discoveries, they have not been able to create life. Since life (the soul) is eternal, to “create life” is axiomatically impossible. Nor can there be “progress” toward an impossible goal. Scientists may be able to synthesize amino acids, but an amino acid is a far cry from a conscious being.

To God alone belongs the power and the privilege to produce life—or to prolong it. We may apparently extend a person’s life, but in actuality, when our death notice is served, no amount of medical technology can save us. Death strides through the doors of even the best hospitals, past the watchful eyes of the best physicians, and makes his indisputable claim.

Though death is inevitable, our rebellion against it has a special significance: It is a sign of our spiritual immortality. The body dies, but the soul lives on, transmigrating to his next incarnation. Because of our identification with the body, however, we think that the person dies with the body.

Rather than misusing our lives in the futile attempt to attain physical immortality, we should live to gain the immortal life of the soul in union with God. Otherwise, though we may live for hundreds of years, what will we actually gain? A tree may live for thousands of years, but the value of its life is insignificant compared to the life of a person who has developed love for God and done valuable work on His behalf all over the world.